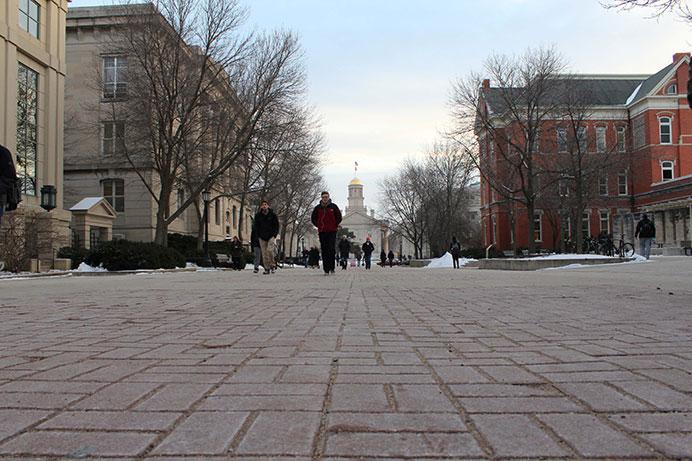 On the 19th anniversary of the Columbine massacre, a few dozen protesters stood up against gun violence by lying down for a “die-in” on the T. Anne Cleary Walkway April 20.

Most of the protesters were Iowa City high-schoolers who had the day off from classes. They gathered at Van Allen Hall, the site of the 1991 University of Iowa shootings in which three faculty members, one postdoctoral researcher, and one administrator were killed. An undergraduate student working in Cleary’s office was severely wounded.

“It is plain to see that in the 19 years since Columbine, nothing has really changed. In the 27 years since the shooting at Van Allen Hall, nothing has really changed,” City High student and event organizer Mira Bohannan Kumar said. “Even as tragedies continue to weigh on our hearts today, our legislators in Des Moines and in Washington refuse to pass reasonable gun legislation providing protection from active violence, which affects each one of us.”

The protesters walked solemnly to the T. Anne Cleary Walkway, named after the administrator killed in the 1991 shooting. Students lay silently on the concrete for six minutes and 20 seconds to symbolize the duration of the Parkland, Florida, shooting, in which 17 students died.

“Lying down for a little over six minutes — it feels really long and really short at the same time,” UI freshman Grace Cook said. “Having to contemplate the fact that that’s how long it took for all those lives to be taken is crazy. I can’t imagine being there in that situation.”

Organizers Bohannan Kumar and City High student and Theo Prineas strongly supported gun reform before and after the die-in.

“Our schools are still not safe. We as students shouldn’t have to be worried about this. School is supposed to be a safe haven for learning,” Prineas said. “We shouldn’t ever have to sit in our desks wondering about the ‘what if.’ We should be worrying about our grades rather than the AR-15s.”

The die-in was organized by Students Against School Shootings, an Iowa City-based organization made up of high-school students opposing gun violence. In the past, Prineas said, they’ve organized school walkouts and the Iowa City March for Our Lives and met with legislators.

Bohannan Kumar said the group would like to ally with the #NeverAgain movement and Black Lives Matter movement in order to create change and more comprehensive gun reform in the nation.

West High student Natalie Dunlap said she thinks it’s important that local groups similar to the student organization keep the momentum going. Especially because, she said, people tend to get upset but then forget about shootings a few weeks later.

A die-in organized by Students Against School Shootings also took place in front of gun dealer Brownells in Grinnell, Iowa, on the morning of April 20. The two die-ins were in conjunction with the many high-school walkouts against gun violence occurring across the nation that day.