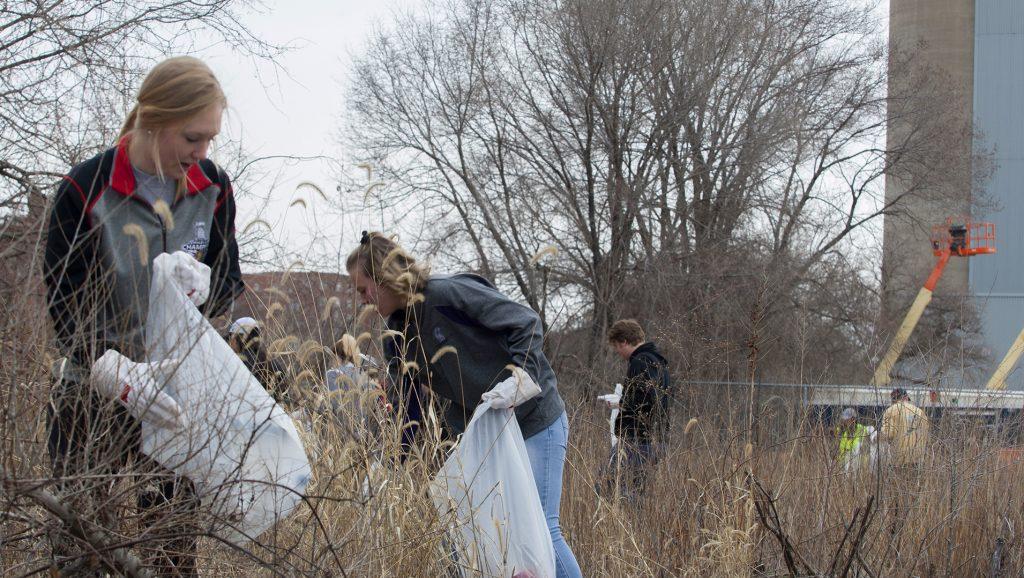 From left: Freshman Emma Rotz and Freshman Abby Thornton pick up trash by the Iowa River during IIHR's river clean up on Saturday Apr. 21, 2018. THe IIHR hosted an Earth Day event during which community members were invited to come pick up trash along the Iowa River. (Katie Goodale/The Daily Iowan)

As many have probably noticed, the Iowa River cuts through the heart of the University of Iowa campus. Despite its central location, the health of the river is often neglected — its banks are riddled with trash.

On the morning of April 21, in conjunction with Earth Day, a group of around 70 volunteers gathered by the Main Library to socialize, catch a bite to eat, and attempt to beautify the river.

Under the direction of David McClain, the water-utilities manager for UI Facilities Management, the group split into four parties. They spread north and south on both banks, combing the ground for trash and debris.

Volunteers traversed from below the dam at the Burlington Street Bridge up toward Hancher, the usual area that the event covers.

UI freshman Nicholas Reid, who was one of the volunteers, joined the effort to help with service hours for his fraternity. He also has experience with river cleanup in Peoria, Illinois.

“It’s usually a lot of fun when we come out here with a group of guys, and it’s a good time helping the community,” he said.

Michael Krasowski, who works in the Stanley Hydraulics Lab, said his daily commute takes him by the river.

“I walk down the river every day and see trash … all over. It’s an eyesore and a hazard,” he said. “Today, we’re only doing a small stretch of river, but it’s about setting a tone, in a way. If we can show that this is something worth doing, maybe other people will jump on board.”

The river cleanup is an annual event, sponsored by the university in partnership with the city of Iowa City, IIHR Hydroscience, and other organizations. The goal is to get the public involved in preserving the river’s environment, Krasowski said.

“The university has an MS4 permit, which allows us to discharge storm water to the river, but part of that means we have to do best management practices and try to get the general public and students involved with the awareness of what’s going into the river,” McClain said.

The 2018 river cleanup had around three times as many volunteers as in previous years, he said.

Besides the expected chip bags, candy wrappers, and loose scraps of paper littering the banks, volunteers hauled away umbrellas, brake pads, and even 10-foot wooden beams. They braved some slopes and thick brambles to pick up every piece of trash they saw. At the end of the event, volunteers separated recyclable material from the rest of the garbage, and the entire haul was weighed.