Foundation hosts Walk Out of Darkness on the UI campus 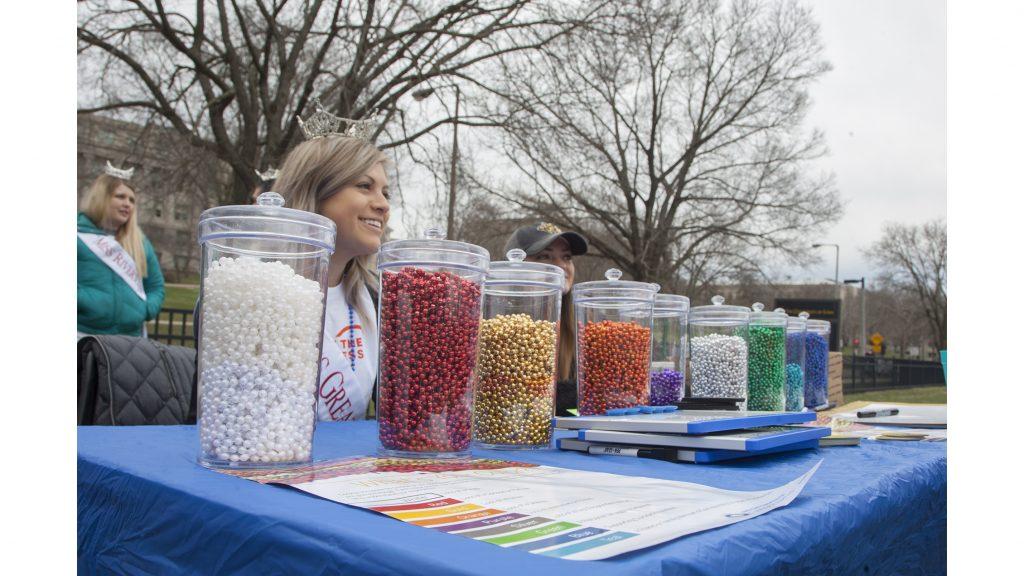 From Left: Junior Gia Dougherty and Junior Kelly Nylen help to pass out beads during the Walk Out of Darkness fundraiser in Hubbard Park on Saturday Apr. 21, 2018. Walk Out of Darkness helped to raise nearly $5,000 for lacking mental health care in Iowa by hosting a walk-a-thon. (Katie Goodale/The Daily Iowan)

Passionate words and the silence of reflection kicked off the Walk Out of Darkness on the afternoon of April 21, hosted by the American Foundation for Suicide Prevention to honor those dealing with mental illness and those who have lost their lives to suicide.

The foundation was established in 1987 with the goal to save lives and give hope to individuals affected by suicide. The volunteer organization works to educate the public on the seriousness and effects of suicide through various events, including the walk.

UI students and Iowa City community members gathered in Hubbard Park to raise awareness of mental health and to raise money for the organization. This is the first time the Walk Out of Darkness has been held at the UI.

Miss Clinton County 2017 Mikhayla Hughes-Shaw, who worked to organize the walk with the Iowa chapter of the foundation, said the turnout meant everything to her. (Hughes-Shaw is a former news reporter at The Daily Iowan.)

“To see all the community support fighting suicide, I think that is just so important … being somebody who struggled myself, being able to have these events and being able to mingle with people who have been affected by it or have struggled themselves gives a great feeling of community and feel that you’re not alone,” she said.

Participants had the option to complete the walk in teams or individually and were asked to wear name tags that displayed the reason for their participation in the walk, whether it be a specific person they had lost to suicide or an overall reason to walk.

Donations at the event totaled to $4,383, and all proceeds supported the efforts of the foundation.

Christina Malchodi, the foundation secretary and Eastern Iowa Out of Darkness Walk chair, said the organization created the walk to bring hope to those affected by suicide and to recognize the importance of mental health.

Malchodi first participated in the walk to cope with the loss of a loved one to suicide, and she has continued to participate to honor the memory of those lost and to also help herself by helping others.

“The reason I do it is to help others because it helped me,” she said.

The event began with an opening ceremony that featured numerous speakers.

Miss Corridor 2018 Cheyenne Prowant spoke about post-traumatic stress disorder and its relation to mental health. Her organization, Mission 22, focuses on PTSD’s effects beyond the battlefield and offers programs for veterans, she said.

After the closing ceremony, participants left Hubbard Park to embark on the walk to raise awareness for the issue. Suicide is especially prominent in college campuses because of the stress, so the walk was especially important to hold on the UI campus, Hughes-Shaw said.

Miss Riverview 2018 Emily Folker noted the lack of mental-health consideration in schools and how it has affected her directly. She has vowed to change that with her organization, The Fingerprint Project.