The 2018 Iowa City RAGBRAI will be similar to the Downtown Block Party, and proceeds will benefit a local charity. 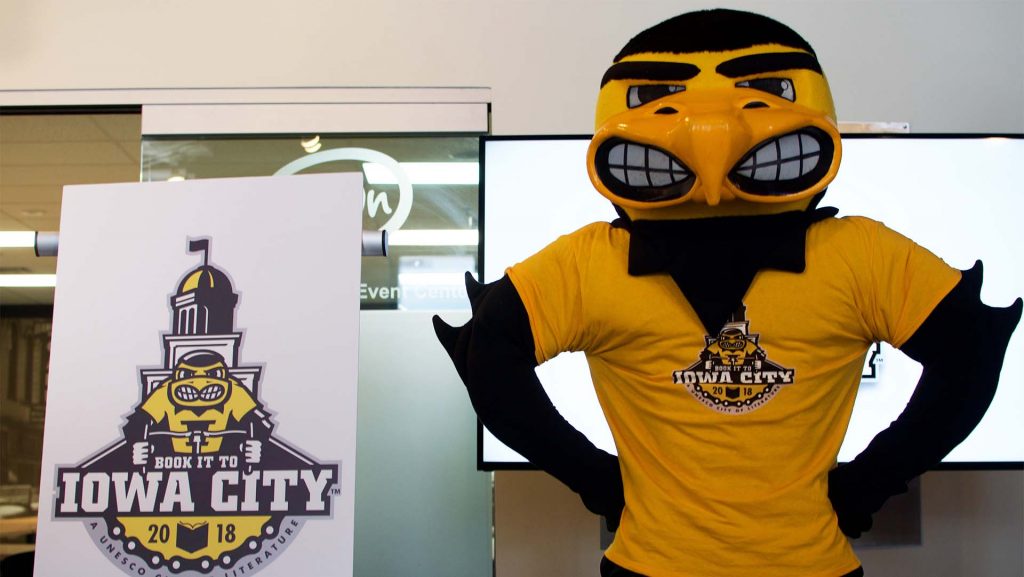 For the first time since 1976, RAGBRAI cyclists will “book it to Iowa City” for their overnight stop this summer. The official 2018 Iowa City RAGBRAI theme and logo were revealed April 17 at MERGE.

Iowa City’s distinction as an UNESCO City of Literature will be celebrated with its RAGBRAI theme.

“How do you connect the book world to the cycling world? That’s why we’ve created the play on words ‘Book it to Iowa City,’ ” said Joshua Schamberger, the president of the Iowa City/Coralville Area Convention & Visitors Bureau.

The 2018 Iowa City RAGBRAI logo features Herky on a bike with the iconic Old Capitol in the background. The phrases “Book it to Iowa City” and “UNESCO City of Literature” are also front and center. The logo will be sold on T-shirts prior to and throughout the event.

“This special arrangement is unique to Iowa City, and we’re hopeful local and state licensees will partner with us and spread this logo around Johnson County, Iowa, and beyond,” Schamberger said.

Riders participating in the 46th-annual RAGBRAI will spend their last overnight stop in Iowa City on July 27.

“While RAGBRAI has been through all 99 counties and through Johnson County many times, it has been 42 years since Iowa City last hosted,” City Manager Geoff Fruin said. “This summer, that 42-year drought will come to an end.”

Downtown District Executive Director Nancy Bird said the streets of downtown will shut down to cars and establish an open-container area so community members and riders can stroll with drinks, eat local food, and enjoy the entertainment. She said this setup will be very similar to the 2017 Downtown Block Party

“All in all, we believe the riders’ final night will be one that will leaves them talking for some time to come,” Bird said. “It will be an authentic Iowa City event that we hope encourages our visitors to come back again and again.”

The entertainment will include several stages with live music, games, and surprise elements that will be announced at later dates. Officials are still selecting the entertainment performances.

He said United Way’s direct involvement and the significant impact it has on the community makes it a natural fit to be a RAGBRAI beneficiary. The organization will also play an integral role in assisting with RAGBRAI volunteer efforts.