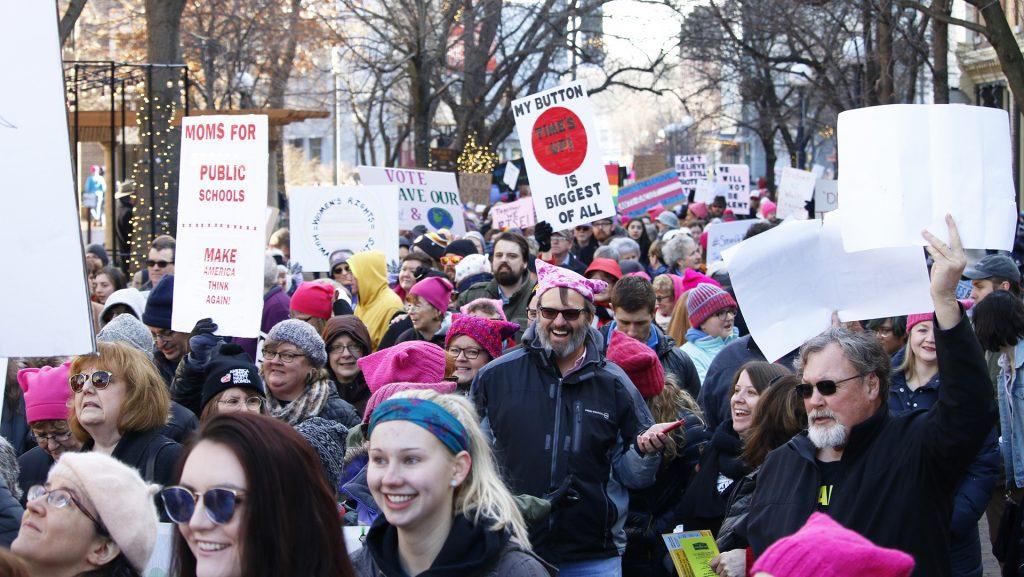 Protesters gather during the Women's March on January 20, 2018. Protesters gathered at the Ped Mall listen to speakers and march for female empowerment. (Katina Zentz/The Daily Iowan)

Rose Cooney, a member of the Iowa City Domestic Violence Intervention Program, said her experience working on the Hillary Clinton campaign could be described as frustratingly sexist.

Cooney worked for the Clinton campaign as a field organizer, caucused first in Iowa, and then traveled to a couple different states. She campaigned the longest in Wisconsin, where she then became the regional organizing director.

Cooney said she found Clinton’s political background was often discredited because of her experiences, such as her relationship with her husband and the “scandal” in which Clinton allegedly sent emails containing classified information. Cooney said in many of the places she campaigned, she would even hear people use derogatory comments about Clinton being a woman.

“People would say, ‘I just can’t trust her.’ When you asked why, they wouldn’t really have a definitive answer,” Cooney said.

While the 2016 presidential election was not traditional, it caused societal issues, including feminism, to surface.

“Hillary has been a powerful woman in the media for 30-plus years now, and even still to this day, she is put down way more extremely in the media than her male counterparts,” Cooney said.

The Fourth Wave of Feminism, which was sparked in the early 2010s, has been focused on sexual harassment and violence prevention as well as intersectionality, according to a study from Georgetown Law Library. The term “feminism” has been prominent in national and local media, especially recently with such movements as #MeToo.

Modern politics have pushed people to publicly support these kinds of issues. Cooney acknowledged some of the comments that surfaced from candidate Donald Trump during the campaign, such as the tape in which Trump is heard saying he can “grab [women] by the pussy.”

This Fourth Wave, scholars say, largely incorporates social media and technology promoting feminist ideals and the concept of intersectionality. This was lost in the First and Second Waves, in which women pushed for suffrage, social equality, and reproductive rights.

University of Iowa senior Jackie Spradley, who majors in gender, women, and sexuality studies, is delving into sexual assault and gender violence in Trinidad and Tobago for her final, capstone project.

She recognizes the role that technology and social media have had in the Fourth Wave and has seen that they provided an outlet to spread feminist ideals. Women can now share their stories on platforms such as Facebook and call out people for things such as sexist remarks, she noted.

For her, the Fourth Wave is about support and viewing people’s struggles through numerous lenses.

“I would say that feminism has saved my life,” Spradley said. “My experiences with sexual violence would have consumed me.”

UI junior Elena Greene, a gender, women, and sexuality studies major, is organizing a March Against Rape Culture in Iowa City, planned to take place on Saturday. She has seen feminism face critiques, including that it is only for white women, she said.

However, she said, being an active advocate in the Iowa City community gave her a broad scope on diverse issues and systems that affect the community.

“For me as a queer women, as a person of Hispanic descent who is often considered white, and as a person of mental illness — I think what feminism has really allowed for me is to see how all of these identities intersect to create a meaning of feminism,” Greene said.

The importance of organizing local events gets understated, she said, and she always tries to include speakers of different ethnicities so that survivors know that they are not alone. Community events create a sense of solidarity and can ignite a lot of change, she noted.

“This movement has forced politicians to examine systemic issues by considering what has been categorized as local,” Greene said.

Misty Rebik, the campaign manager for Democratic gubernatorial candidate Cathy Glasson of Coralville, said from her experience in politics, sexism is alive and well.

Glasson runs on a progressive platform, with clear, strong stances on such policies as universal health care, raising the minimum wage to $15, and expanding union rights for workers, Rebik said.

Cooney touches on the concept of being a woman in politics with a progressive platform and said Sen. Bernie Sanders received much of the credit for running with leftist ideals, even though Clinton had put hers out much earlier.

However, Rebik said, it’s inevitable for female candidates to be second-guessed, and she has seen that through microaggression.

Rebik said her campaign has been asked why Glasson decided to run for governor instead of a position such as city council, and that she often is scrutinized for a perceived “lack of experience.”

“There are very clear microaggressions of the inequality of women and the struggle our society is wrangling with,” she said. “We trust them to be nurses and teachers but not to make the big decisions.”

UI senior Esme Bengston, who studies sexual harassment, looks at how such harassment is perceived online and how people react to popular movements on social media.

“I think sexual harassment is something people struggle with because it’s a gray area,” she said. “We want to grade it on a scale of being not that bad to bad enough. Does this person deserve this consequence? It’s tough as a woman and as a feminist.”

Bengston said the Fourth Wave for her involves being inclusive of women of different backgrounds and ethnicities and moving away from the ideology of “white feminism.” She said the term “feminist” is becoming a sort of trend and the average social-media user is more willing to adopt it and identify with it online.

However, she acknowledged the connotations the label has in the political sphere.

Rebik acknowledgs the positive effects that the new wave of feminism has had on modern politics. More women are coming out from behind the scenes and stepping into bigger positions, she said.

RELATED: Ninety-eight years after women got the right to vote, 98 Iowa women will vie for state office

From what she has seen, she said, Glasson lives and breathes feminism. Similar to a lot of women, Glasson started out doing the dirty work as a nurse, and that is valuable experience as she runs for governor, Rebik said.

“We are finally deciding that we need to be at the decision-making table,” Rebik said.