As the regents look to make tuition increases predictable, students express concerns about the instability of state funding. 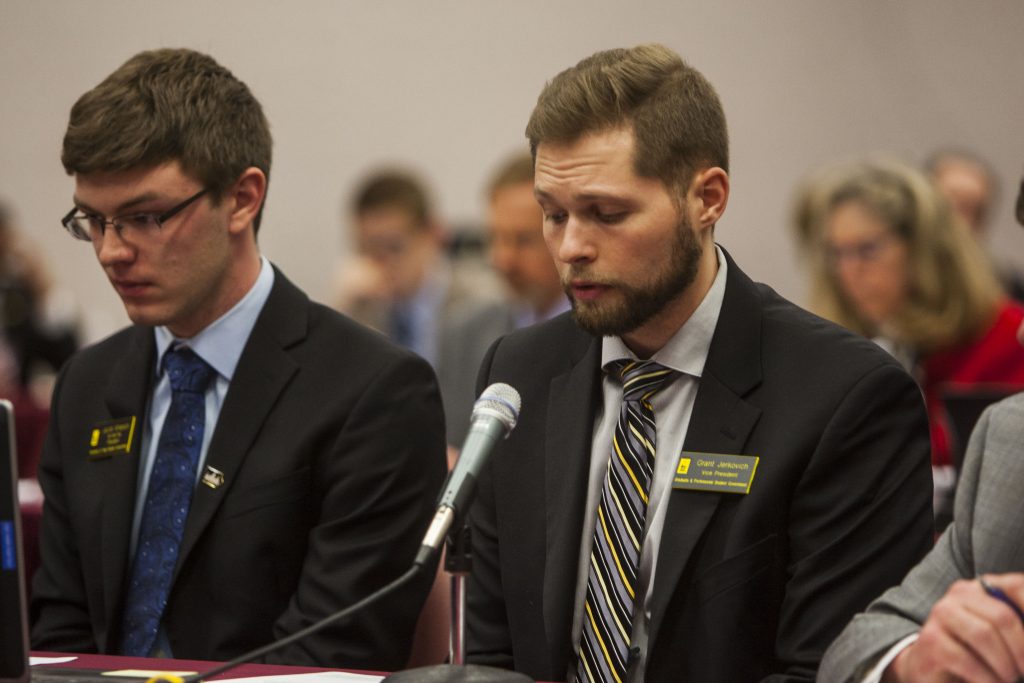 UISG President Jacob Simpson and GPSG Vice President Grant Jerkovich speak to the state Board of Regents about the effect of tuition increases on the student body on Thursday, April 12, 2018 at the Iowa School for the Deaf in Council Bluffs. (Emily Wangen/The Daily Iowan)

COUNCIL BLUFFS — Iowa’s regent universities have struggled to strike the balance between raising tuition and maintaining quality, but among the uncertainty, student leaders have found predictability: they can rely on the state to disinvest in higher education.

After delaying the tuition discussion for nearly six months, students from the institutions governed by the state Board of Regents spoke out on the regents’ tuition proposal at the regents’ meeting on Thursday to bring attention to the effects of tuition increases on the accessibility of higher education in Iowa.

The proposed tuition rates for the 2018-19 academic year include base resident undergraduate increases of 3.8 percent for the UI and ISU and 2.8 percent for UNI, which scales back on plans the university presidents proposed in August 2017 of 6-7 percent across the three institutions, provided state support remained flat.
UI undergrad tuition plan

“As our tuition increases to cover the decreasing contribution of the Legislature, it becomes more difficult for students to afford their education and succeed from the moment they step on campus the first time to the moment they graduate,” he said.

According to the 2016 Student Experience at the Research University survey, 52 percent of students reported worrying about their financial situations “often,” and 24 percent of students indicated they were “very concerned” about financing their education for the next year.

Even though UI tuition is low relative to its peer institutions, the data make it clear that students struggle to afford a UI education, Simpson said. He said financial aid policies and practices must be reviewed and reformed to help increase retention and graduation rates and decrease student debt.

“We must define our own future for the well-being of students,” he said.

% Increase: 2.0%
Grant Jerkovich, the vice president of UI Graduate and Professional Student Government, said the regents carry a great responsibility to maintain the balance between affordability and quality in students’ education.

“The state has interrupted that delicate balance,” he said. “The state sees tuition increases as a readily available, ordinary revenue generating device, while it should be an extreme measure taken on when this board sees no other option. However, it’s not really a choice when the options are the degradation of the Universities or shifting financial burden onto students.”
RELATED: Will higher education remain accessible as funding becomes less public?
Fiscal 2018 funding cuts amounting to $10.9 million were finalized in March. The state Legislature has not yet determined fiscal 2019 appropriations, but the universities are requesting a $12 million increase for resident undergraduate financial aid.

Regent President Mike Richards said there will be some tuition increase during the 2019-20 academic year, but the goal is to set tuition rates for that year before the end of the 2018 calendar year to ensure students and families can plan their finances.

Richards maintained that the regents will only set tuition rates for the 2018-19 academic year once at the regents’ June meeting, and in the future, will look to establish a baseline range of tuition increases for the next five years.

It is important to see to it that the universities have the necessary resources, Richards said, to ensure the regent institutions continue to be a destination for highly skilled and qualified Iowans as well as nonresidents.