The UI looks to defer $5.5 million through a construction project moratorium in response to state budget cuts. 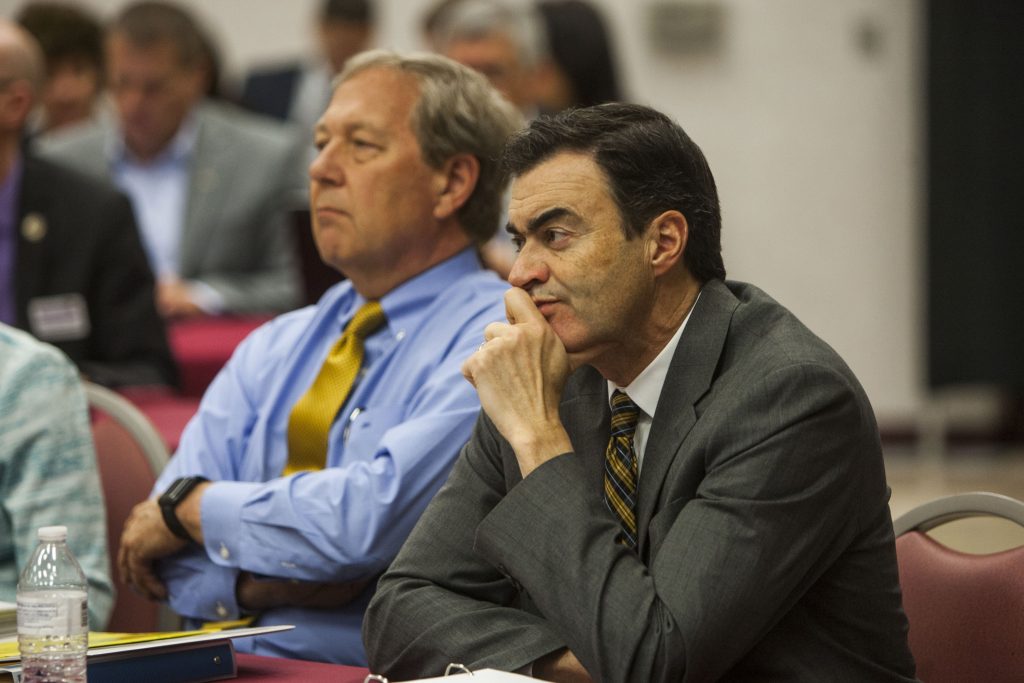 UI President Bruce Harreld and UI Senior Vice President for Finance and Operations Rod Lehnertz listen during a state Board of Regents meeting at the Iowa School for the Deaf in Council Bluffs on Thursday, April 12, 2018.

COUNCIL BLUFFS — Campus construction projects are suspended at the University of Iowa to as a result of state budget cuts made late in the fiscal year.

University administrators said the decision was made in light of the state making $5.49 million in midyear cuts to the institution’s budget with less than three months left in the fiscal year, which ends June 30.

UI Senior Vice President for Finance and Operations Rod Lehnertz initially announced the moratorium on project work Wednesday at the state Board of Regents’ Properties and Facilities Committee meeting.

“This will be an effort to shed cash spending and cash flow in the final quarter,” Lehnertz said.

The five-month moratorium was enacted Thursday, putting an end to all campus physical care and improvement projects until Sept. 12. From there, the UI will decide whether or not they will end the moratorium based on levels of state support.

Per the regents’ capital plan, the UI planned to construct three buildings this fiscal year:

“We regret this action,” UI President Bruce Harreld told regents Thursday. “However, the current and pressing need to account for such a large decrease in just 90 days forces our hand.”

This action will defer approximately $5.5 million from the general education fund budget, Harreld said, but noted the UI will need to look for other solutions in the long-term.

A few exceptions to the moratorium that will be allowed to continue include projects that have been bid and awarded, are already under construction, address safety or code concerns, or are needed due to an emergency.

“The project moratorium could have numerous consequences,” Harreld and Lehnertz wrote in a statement Thursday. “The condition of facilities may suffer, and repairs may become more expensive in the future.”