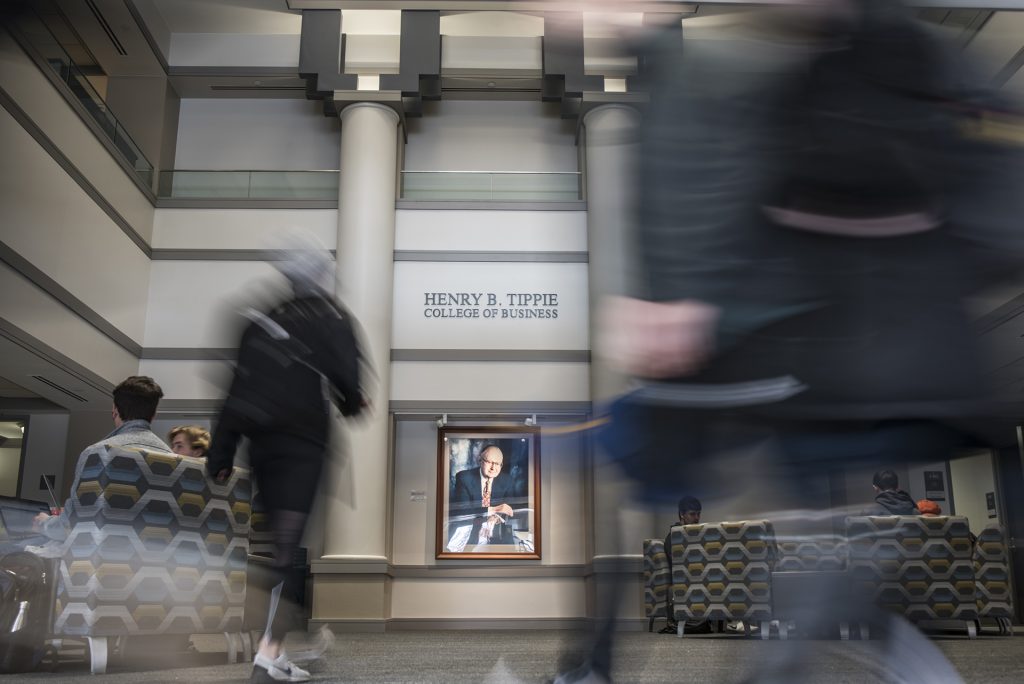 Students roam the halls of the Pappajohn Buisiness Building on Monday, Feb. 12, 2018. The Tippie College of Business which is housed in Pappajohn is instituting a new Masters of Business Analytics Program in fall of 2018. (Ben Allan Smith/The Daily Iowan)

Counterproductive behavior at work may lead to disturbances in sleep, according to a new study from the Univerity of Iowa Tippie College of Business.

Counterproductive behavior may include any action that could harm the well-being of the organization or its members, he said. For instance, taking a break when one is not supposed to or doing something that could come in the way of others.

The basic findings suggested that after people did something bad at work, they would go home and keep revisiting their work mentally, leading to disturbed sleep, Yuan said.

“We also have evidence that shows this study is not culture specific and is not only applicable to [populations] in U.S. and China,” he said.

The research consisted of three studies. The first was conducted in China, in which participants took two surveys per day over two weeks, reporting their behavior.

The second and third studies were conducted in the United States, using Mechanical Turk, an online program that allows people to sign up and record their responses, Yuan said.

“Workplace errors did not overlap with counterproductively,” Yuan said. “If a person behaved in a wrong way unintentionally, it would not count of counterproductive behavior. It [is] important to act with intention.”

There have been many studies that relate counterproductivity with social interactions, he said.

“But there not been a lot of studies that look at the intrinsic cost of doing something bad at work [and relating it to] sleep,” he said.

People do bad things for a variety of reasons, Yuan said. For instance, someone could be under stress working with a customer and talk to them in a rude manner.

“People who behave counterproductively are not bad people but could be in a situation that prompts them to do so,” he said.

A lot of research shows that not sleeping well can lead to being unproductive at the workplace, Yuan said. Going further, in some cases, there is a higher risk for workplace injury due to disturbed sleep. Insomnia and bad behavior at work can be cyclical, he noted.

“Counterproductive work behavior is an important topic for study in organizations,” Christopher Barnes, a co-author of the study at the University of Washington, said in an email to *The Daily Iowan*. “Traditionally, we focus on the costs for organizations [such as theft or destruction of property]. But we should also care about employee well-being.”

The research indicates that employees who engage in counterproductive work behavior can suffer from their own behavior, he said.

“This study uncovers another important way that work can influence employee’s off-work well-being,” Yongjuan Li, a co-author of the study at the University of Chinese Academy of Sciences, said in an email to the *DI*.

Research also suggests that insomnia leads to stress, which can have a negative impact on work, Yuan said.