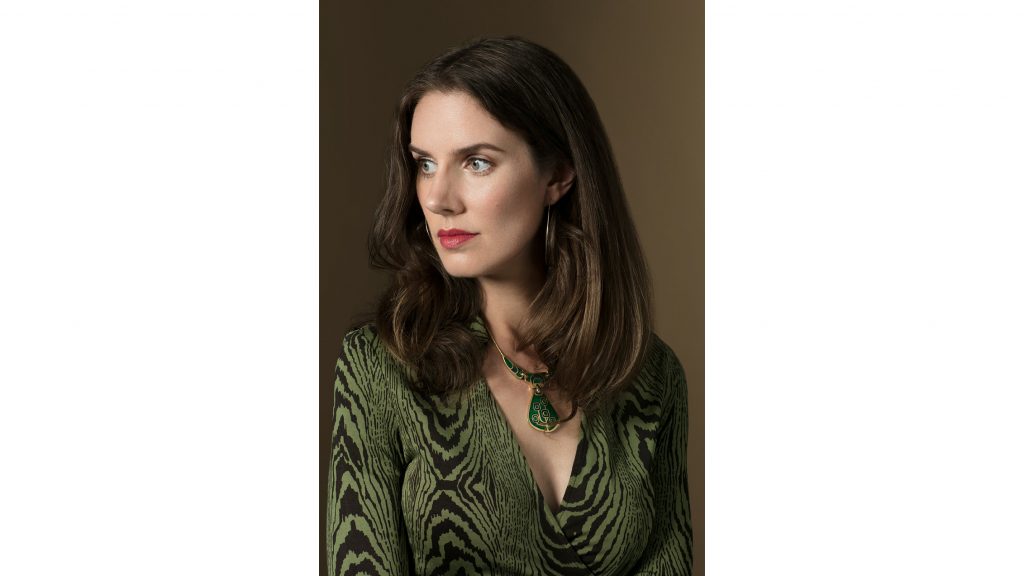 Active in the Iowa City literary community over the years, Jamison has participated in Creative Matters lecture on campus, readings at Prairie Lights, and events at Mission Creek Festival. She will read from her new book, The Recovering: Intoxication and Its Aftermath, at Prairie Lights, 15 S. Dubuque St., on April 25, which will include a conversation with longtime mentor and Workshop Professor Charles D’Ambrosio.

At the Workshop, Jamison lived a “self-dramatizing life” full of “constant drunkenness” and a series of “botched love affairs” that fueled her addiction. Reflecting further on her experience, she said, she was grounded by the friendships she made at the Workshop. Her last Workshop professor, D’Ambrosio, was an immense help to her both “emotionally and creatively.”

After leaving Iowa City in 2006, Jamison cared for her dying grandmother in Los Angeles, embarked on a monthlong trip to Nicaragua, and faced an unplanned pregnancy in her early years as a Ph.D. candidate at Yale. This experience were later points of influence in several of her acclaimed essays and collections.

She returned to Iowa City in 2009 while her former partner attended the Workshop. She worked early morning shifts at DeLuxe Bakery, drank at bars on Market Street, and wrote her début novel, The Gin Closet (2010).

Jamison said the novel was an exercise in taking her internal life and distorting it. A lot of The Gin Closet was autobiographical not in terms of writing about her addiction but rather writing a speculative autobiography about where her life could have gone.

“I was taking certain things that were happening inside of me and following them to these more extreme spaces,” she said. “It was both an act of self-expression and an act of imagination into otherness.”

Struggling to write a novel about the Sandinista Revolution in Nicaragua, Jamison started reporting in her spare time as a break from writing fiction. She combined her self-funded journalism on 120-mile ultra marathons, Morgellons disease conferences, and poverty tourism, with her experience with abortion, self-harm, and heart surgery related to alcohol addiction. She later arranged 11 essays on these topics into a collection called The Empathy Exams, a finalist for the PEN/Diamonstein-Spielvogel Award for the Art of the Essay.

“Nonfiction at that moment in my life was a way that I found a way out of myself,” she said. “I found immense pleasure in shaping and transcribing the world. The movement between external and internal, processing everything through my own sensitivity, and bringing my personal experience felt like one massive experiment.”

The opening essay, “The Empathy Exams,” recounts her time as a medical actor at the UI Hospitals & Clinics, while wrestling with feelings of guilt about her recent abortion, among other topics. What struck her the most about being a medical actor was the way pain was quantifiable and empathy could be graded on a scale of 1 to 10.

“That job was the first time the word empathy seemed strange to me, which is the point when I really start to think about something,” she said. “That strangeness kept deepening the more I wrote the collection.”

Her new memoir, *The Recovering: Intoxication and Its Aftermath*, combines experience, literary criticism, and journalistic reportage to create a book that reinvents and interrogates the recovery genre as a whole.

The interchange between reflecting on her experience and sharing others people’s stories offered her “an experiential relief and excitement that presented a way to approach questions from different angles.”

“I often have a sense of what my questions are when I embark on a piece, but I always try to stay open to new arguments being revealed,” she said.

With topics ranging from social policy debates, racial politics, 12-step meetings, and incarceration in relation to addiction, *The Recovering * does not attempt to be a comprehensive history of alcoholism. The memoir opens itself up to the weight of human experience.

Paired with research from her dissertation, Jamison studies various alcoholic writers. Many that she notes have become an integral part of the rich literary in Iowa City. During her time at the Workshop, she looked up to these writers, mimicking their drinking habits.

The memoir references “Raymond Carver and John Cheever tire-squealing through early morning grocery-store parking lots to restock their liquor stash; John Berryman opening bar tabs on Dubuque Street and ranting about Whitman till dawn, playing chess and leaving his bishops vulnerable; Denis Johnson getting drunk at the Vine and writing short stories about getting drunk at the Vine.”

“So many stories were attached to this institution,” Jamison said. “Iowa felt like a space full of those legends and also a space where their presence meant that I encountered their work. It felt natural to use Iowa as a narrative point of departure for exploring some of their lives and histories.”

She regards sobriety as a ragged process. Although her life did not derail because of her alcoholism, she said, her obsession with drinking felt like the center of her life.

“Among other things my story is one of a high-functioning addict,” she said. “The constant level of internal tension was absolutely one of those things that booze provided a relief from. It quieted the internal chatter … I just had enough of the certain abiding sense of shame — the certain claustrophobia with how all my life was.”

She joined a 12-step group years later during her second stint in Iowa City, when her partner was in the Writers’ Workshop. She was able to find an intimate community in the slogans, rituals, and clichés. After a relapse, she quit drinking at the age of 27.

“For me, the 12-step process was very transformative and helped me to understand sobriety as something other than just deprivation,” she said. “Something that led into a new era of my life. The community of it felt like expansion rather than subtraction.”

As the director of the nonfiction concentration at Columbia University and leader of the Marian House Project, she is an advocate for nonfiction as an academic study.

“Formal reinvention has been part of this massive, sprawling, impossible to contain or draw boundaries around genre we call nonfiction,” she said. “The ways in which nonfiction is finding form to articulate and illuminate self and everything beyond the self are exciting.”