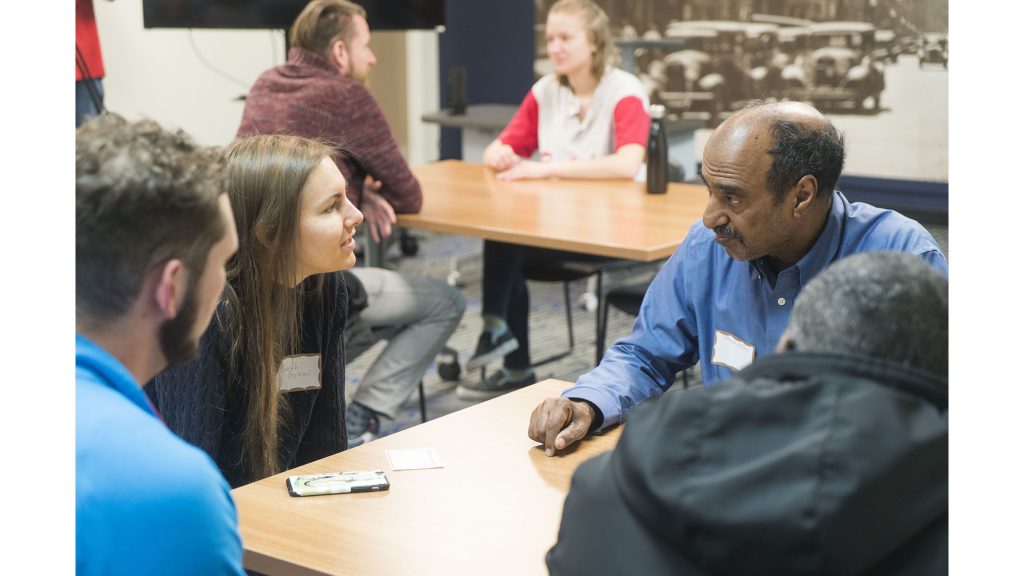 The Daily Iowan; Photos by Gaoyu

People practice their English in a community project which was held by the UI Conversation Center at MERGE on Tuesday, April 3, 2018. (Gaoyuan Pan/The Daily Iowan)

People who speak English as a second language are becoming more confident while meeting new people through an Iowa City language program.

At MERGE, 136 S. Dubuque St., voices drift over one another, broken apart by happy greetings and laughter. Hands gesture to mime words in a language not yet mastered, but conversation ebbs and flows as naturally as those between native speakers. Language isn’t a barrier here.

Both the Friendship Community Project and Conversation Center are fairly new, founded in 2015 and 2016, respectively.

Susan Prepejchal, the director of the Friendship Community Project, said she got the idea for the nonprofit when people had to be turned away from Kirkwood, where Prepejchal used to work, because the language classes were full.

She said the project offers four levels of classes, and usually only the more confident students come to the Community Conversations because many are wary of not being understood.

“These one-on-one conversations really help them gain confidence in their English and gives them the opportunity to meet new people and exchange knowledge of cultures,” she said.

Prepejchal noted that the center has conversations sometimes in class, but it can be difficult to regulate with 15 to 20 people. They are also learning in a more traditional environment, so the more relaxed atmosphere of the Community Conversations can help students become closer to fluent and have real conversations that aren’t scripted, she said.

Amaya, who came to Iowa from El Salvador, described her job at Mesa Pizza, and she had asked around for people’s opinion of the food, which everyone professed as delicious. She and Centeno, originally from Venezuela, described the beautiful weather and traditions in their countries they missed, as well as things they didn’t miss, such as gangs and politicians.

While the women aren’t fluent yet, they held conversation easily and never seemed to become confused or uncomfortable with English. They both expressed their wish for winter to be over and reminisced about the warmer weather in their countries, but they said they love Iowa City and how nice the people are.