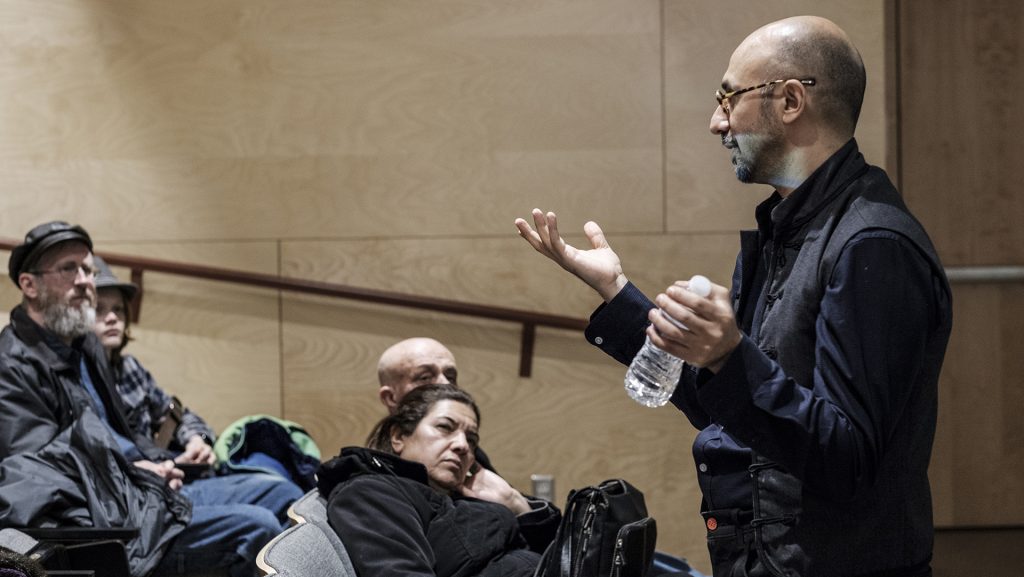 New York-based Iranian filmmaker and graphic artist Hamid Rahmanian spoke about his ongoing work, “The Shahnameh Project,” at the School of Art and Art History on Monday.

Each work in the project is based on 10th-century Persian poet Ferdowsi’s epic poem of the same name, a 50,000-line-long work that blends elements of myth and history of the Persian Empire. The project now includes a 600-page illustrated translation of the poem, a pop-up book, and a shadow play, Feathers of Fire, which will appear at Hancher on Wednesday.

While the project is a collaborative effort, Rahmanian, the project’s creator, retains a central role as illustrator and director. Much of the lecture focused on his creative process, which is centered on his practice of repurposing illustrations from historical Persian artworks and manuscripts by pasting them into the contemporary collages featured in his books.

“I put together over 8,000 pieces of literature and lithographs from the 14th century to the mid-18th century, anything influenced by the Persian style of painting,” he said. “Every page [the collages are made from] up to 182 distinct images from up to 32 different manuscripts.”

His choice to adapt stories from the Shahnameh into shadow play in Feathers of Fire also has concrete roots in the history of Iranian artistic tradition, he said.

“All the design in [Feathers of Fire] has an Iranian, Islamic, Middle Eastern — whatever you want to call it — reference,” he said. “In the 10th, 11th, 12th, and 13th centuries, the common genre of entertainment among Muslim societies was shadow play.”

The lecture and the performance are featured as part of Hancher’s “Embracing Complexity” series, which, according to a press release, “seeks to build a textured knowledge of Islamic cultures while creating a greater sense of empathy for the experiences of peoples of diverse racial, ethnic, and religious backgrounds.”

Rahmanian said the project’s creation was motivated in part by a desire to showcase positive aspects of Iranian history and culture for Western audiences, in contrast to what he described as Western media’s excessive focus on political and social issues that exist in contemporary Iran.

“The narrative that exists about [Iranians] is completely negative,” he said. “So I thought it would be great to focus on the highlight of the culture, not just the negatives, and the highlight of my culture is its visual and literary tradition.”

By adapting the Shahnameh into formats that are accessible for all ages, such as shadow play, Rahmanian said, he hopes younger audiences in particular will develop a more nuanced perspective on Iran and its culture that includes appreciation for its positive aspects in addition to awareness of the issues the country faces.