The UI SURGE Party came out ahead of the competition in the most contested UISG election since 2008. 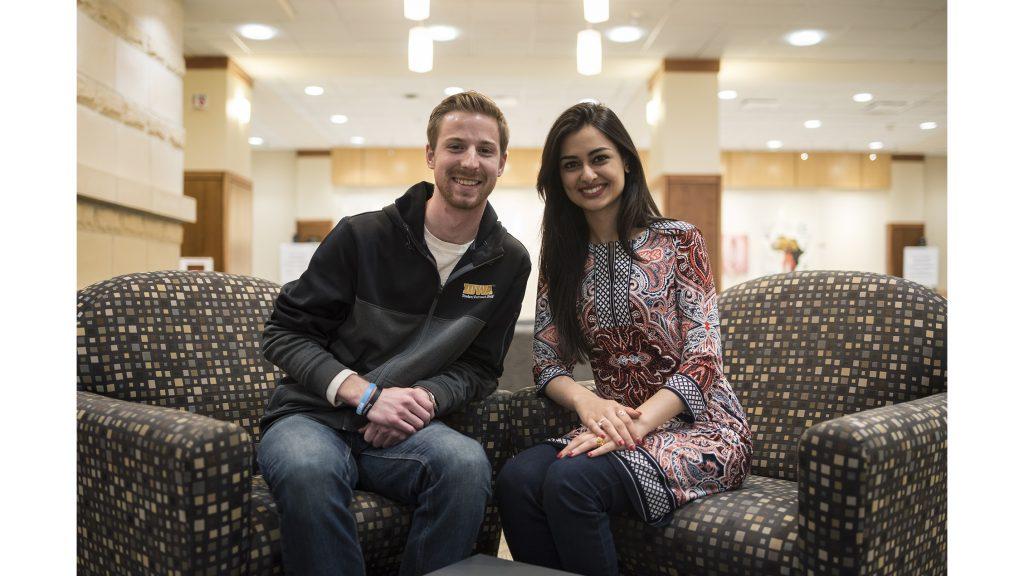 UISG Vice President, Heath Schintler, and President, Hira Mustafa, pose for portraits inside the Hubbard Commons of the IMU following the election results on Friday, March 30, 2018. Schintler and Mustafa are running on the Surge Party ticket who won the UISG election for the year 2018-19. (Ben Allan Smith/The Daily Iowan)

In a contested University of Iowa Student Government election, one ticket surged ahead of the rest to come out of the two-week-long campaign season victorious.

Students nervously sat in the Hubbard Commons in the Iowa Memorial Union Friday awaiting the preliminary results of the UISG election held Wednesday and Thursday on MyUI.

It was a competitive election with the most amount of tickets running since 2008, the last time four tickets ran. Only 25.08 percent of eligible voters voted in this election.

“Before we even started getting results, I considered what our party did a success and so I didn’t need this to feel proud of my team,” Mustafa said. “I’m very excited to carry out all of the things that the student body cared about and wanted us to change.”
RELATED: UISG campaign combines new representation with experience to bring change
Mustafa said the first order of business once she takes office is to make everyone feel welcome in order to move forward.

“There’s a lot of rebuilding to do in terms of creating a group identity, because it was such a political election this year, and as much as we can, work to mend all of those bonds and form a unique vision together moving forward,” Mustafa said.

Despite losing the presidential race, Mansaray from the Student Collective Party said he hopes to continue to serve UI students by applying for an executive position with UISG.

“I hope the SURGE president and vice president will consider me in one of those cabinet seats I will be applying for to continue to trying to improve the communication gap that we have between students and government,” Mansaray said.

Lynch from Envision Iowa said she will be back next year and hopes to run again.

“We ran a good campaign with the circumstances we were dealt,” Lynch said. “I think every member of our ticket stepped up.”
RELATED: UISG campaign envisions a safer campus with more accessibility
SURGE Party senatorial candidate Sammy Stoll, who also serves as president of Active Minds, said she was beyond ecstatic to learn she had won a seat so she can advocate for mental health as a member of UISG. Stoll noted her vice president of the mental health advocacy organization was also elected to UISG Senate.

“Mental health is going to be a priority at the University of Iowa,” Stoll said.

Empower Iowa senatorial candidate Austin Wu looks forward to continuing to advocate at all levels of government for UI students. Wu received the fifth highest amount of votes for senator in the election.

Nelson from Empower Iowa said the election started a conversation about the role of UISG on campus and what it looks like moving forward. While he is not expecting the end result to change, he noted the election results have not been finalized yet.
RELATED: Empower Iowa brings experience, perspective to UISG campaign
Per election code, election results will be certified by the Election Commissioner after review of each ticket’s campaign finance reports, violation hearings, and satisfaction of any penalties.

“Obviously there have been some headlines of some complaints that still need to be finalized and those types of things, so we’re waiting to hear back,” Nelson said.
RELATED: UI SURGE Party found responsible for falsification of campaign finance records, not responsible for alleged intimidation
The inauguration will take place April 28 at 1 p.m. at the University Club, 1360 Melrose Ave.