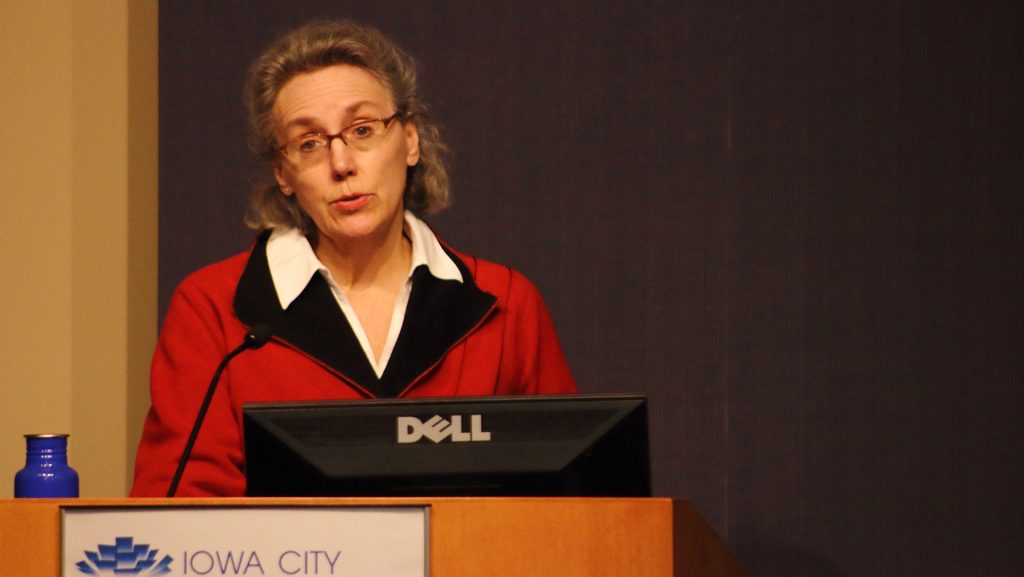 In her presentation, Eckstein discussed literature from two different environmental catastrophes, the first being the Bhopal disaster in which more than 500,000 people were exposed to methyl isocyanate gas because of an explosion in an insecticide plant located in Bhopal, India. The official death toll is believed to be 15,278, Eckstein said.

Eckstein used the 2007 book by Indra Sinha, Animal’s People, which is set in Bhopal, to research the effects that this leak had beyond simply numerical data.

“If we let it, I think literature gives us breathing space to consider tangled human and environmental affairs without the pressure to jump immediately to premature conclusions,” Eckstein said. “Environmental humanism is interdisciplinary in many ways, so I move from city to toxins to literature and back again.”

Eckstein used the history and presence of toxins in this particular urban area to provide an analysis on the social, cultural, and political effect the incident has had.

The books and Eckstein’s research delve into the life of the main character, Animal, who, after exposure to chemicals following the explosion, did not fully develop his spine, forcing him to walk on all fours. Eckstein examines how this exposure has influenced all parts of his life.

Eckstein then moved on to the second incident, taking place in the DuPont rubber plant located in Louisville, Kentucky, which suffered an explosion killing 12 and injuring 37. In the years following, the city of Louisville has experienced many more events similar to this.

“This is a story told locally and across time,” Eckstein said. “The event has been hard for West End residents to forget; memorably bad decisions that were made after the first explosion to let the evacuated workers back in after the event. Also, events were captured live for the Louisville residents by the advent of television.”

Enumerating the similar events at factories around Louisville between 1965 and 2011, as well as the area companies’ lack of prevention and clarity, Eckstein cited several forms of literature that have referenced the toll these events have taken on the health and social aspects of the community.

In choosing these two events to cover instead of other, more catastrophic around the world, Eckstein made her decision based on her competency in the English language, in which all her sources were written, to avoid being too presumptuous.

Wednesday was the first time an English Faculty Colloquium was held in the Public Library.

“Usually, we just hold the colloquium in the EPB, which is generally not as accessible to the public,” Associate Professor of English Blaine Greteman said. “However, we found that the Public Library’s only requirement was making our event to the public, which we thought was great.”

Perhaps because of the new venue, several students attended the colloquium, including UI student Sasia Da Silva, an English major.