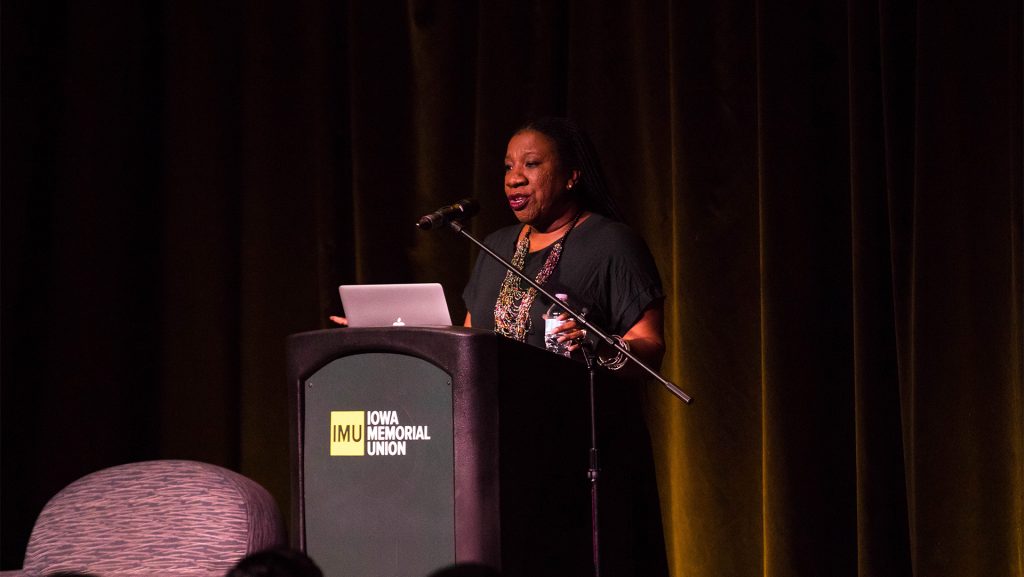 Tarana Burke, the founder of the #MeToo movement, speaks in the IMU on Tuesday. During the lecture, she spoke about her experiences regarding sexual assault and how she has advocated to stop abuse and help victims. (Megan Nagorzanski/Daily Iowan)

#MeToo movement founder Tarana Burke shared her vision for the global phenomenon of solidarity with survivors of sexual harassment and assault Tuesday evening in the IMU.

Burke has been devoted to civil-rights activism and social-justice work for more than 25 years. She is the senior director of Girls for Gender Equity in Brooklyn, New York, and works to support survivors of sexual abuse. She was also featured in a group of “silence breakers” as one of Time’s 2017 people of the year.

Burke shared the moments that first inspired her to work to help survivors of sexual violence heal. While working at a youth leadership camp, a young camper revealed to Burke her story of sexual violence. At the time, Burke found it difficult to tell the young girl that sexual assault had affected her as well.

“The one thing I couldn’t focus on and I couldn’t tell her was that this had happened to me, too,” Burke said. “As soon as she walked away, I realized that was all I needed to say.”

Burke said the movement was born inside of her in that moment.

“Me too really was born out of taking a step back and trying to think about what I needed at this age,” Burke said. “What could someone have said to me at 14 or 12 or 9 that would have changed the trajectory of my life?”

The national conversation on sexual violence picked up wide-scale momentum in October 2017 after numerous powerful men, including movie mogul Harvey Weinstein, were accused of sexual abuse and harassment — the #MeToo campaign became rampant across social media.

Burke emphasized, however, that this was not a movement centered on taking down powerful men.

Burke’s lecture was hosted and coordinated by the University Lecture Committee and sponsored by the UI Interfraternity Council.

“Our committee is always looking to address the big issues facing not only our community but the country as a whole,” Lecture Committee member Caleb Bell said. “We want to be able to bring [the conversation on sexual assault] to Iowa City.”