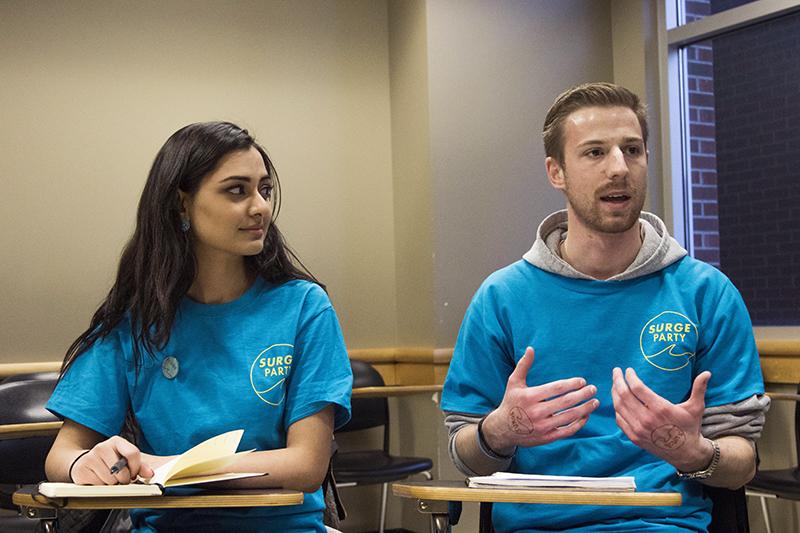 About a third of the group’s members have UISG experience, and about two thirds are from outside the organization in an effort to bring in more representation into student government, Mustafa said.

The group estimates its members are involved in over 100 student organizations collectively.

“There’s a large number of pockets of students who don’t know what UISG is and have needs that have gone unheard from the organization over the years,” Mustafa said. “We can’t say we’re representing all those voices if we’re not out there and interacting with them.”

The group plans to hold more public office hours not only for senators, but also for the vice president and president to encourage student outreach. The group also aims to have a first year and transfer student assembly, and conduct a third party evaluation of the organization’s structure to target accessibility.

“With my experience being on the outside, not knowing what’s going on, seeing issues on campus, and not knowing who to talk to in order to address them is for me and others on our ticket – it’s our priority to make sure students have an avenue to make changes,” Schintler said.

“It’s about having that informal relationship, so people feel comfortable enough to shoot you a text,” Mustafa said.

“We are looking at the whole picture of affordability and we have the team to make it happen,” senatorial candidate and current UISG Director of Student life Kyle Scheer said.

Alex Bare, the current UISG Chair of Justice and Equity said his fellow ticket members’ dedication to equal representation and encouraging diversity was why he joined the UI Surge party.

He mentioned how fellow senatorial candidate Jacob Heid advocated successfully to add an additional $3,545.70 to complete funding for the UI Powwow.

“I know that what sets us apart from the other groups and other parties that are saying that they are fighting for representation, justice, and equity, is that everyone will say it, but only some people are fighters, and if you want a fighter, you’ve got her right there,” Alex Bare said, referring to Mustafa.
RELATED: UISG unanimously votes to fund Native American Powwow
Mustafa said she gained experience as a resident assistant and as UISG Health and Safety Liaison, along with involvement with other campus organizations to advocate for students on issues including sexual assault, affordability, and food insecurity.

“I’ve seen my residents skip the meals, I’ve seen what it’s like for them to be like ‘oh I don’t feel comfortable attending an event because I won’t be able to afford dinner,’” Mustafa said. “At the end of the day we’re humans not numbers and statistics, that’s where we need to push beyond, and that’s not the history of UISG but that’s where we should be headed.”