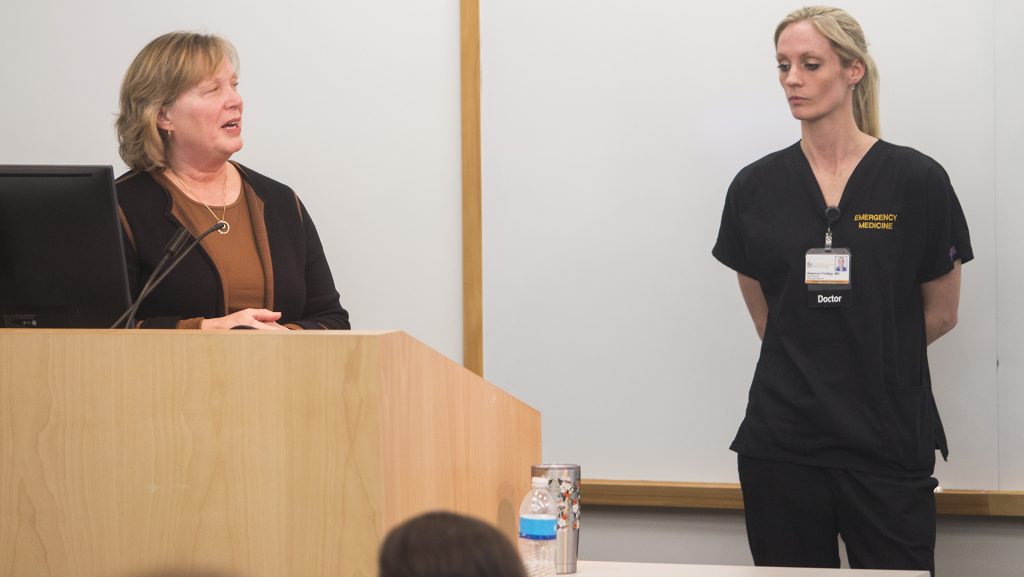 A lecture focusing on the issues of current-day human trafficking took place Monday night, held by Medical Students for Choice, with the purpose of educating medical students and community members about the issue.

Iowa Gov. Kim Reynolds announced the Iowa Hotel/Motel training project in September 2017, which would help educate hotel and motel workers on how to spot signs of human trafficking and what to do if a situation arises.

Margaret Fuller of Medical Students for Choice heard about this initiative. However, she said, she thought it was strange that medical students weren’t receiving the same type of education as hospitality workers.

“I’m sure there are a lot of opportunities for med students that could be particularly useful so they can be advocates for victims,” Fuller said.

She said physicians and nurses are sometimes the first responders that victims will see, and it would be beneficial for them to have this training.

The National Human Trafficking Hotline received 218 phone calls in 2017 in Iowa, and recorded 74 cases of human trafficking in the state, according to its website. In the country, there were 8,524 cases reported to the hotline.

Shannon Findlay, a UIHC emergency-medicine physician and human-trafficking activist, was one of the presenters at the event. She said she initially got interested in trafficking when she was living abroad.

However, Findlay said, no one was talking about it, which is what made her want to bring more awareness to UIHC.

“We just started teaching it formally in the med school,” Findlay said. “Nationally, they’ve been advocating for more, but there is no formal mandate for it … I suspect it will be coming down the road.”

The lecture began by raising awareness, giving the audience a summary of what the issue is, including coercion into sexual acts and other situations involving force.

Findlay said one of the misconceptions about human trafficking is it always involves transportation, and it only affects women, when that’s not always true. She then discussed characteristics of labor trafficking and recruitment methods.

Pam Terrill, the coordinator of Johnson County sexual-assault-response team and sexual-assault nurse examiner, discussed some previous trafficking cases that occurred around Iowa City to raise awareness for how close to home the issue can be.

A video was then shown about three Iowa women who had been victims of sex trafficking, and Terrill gave many examples of how victims have been found.

“We heard about kids going to college and getting abducted on the East Coast,” Terrill said.

She said it’s an issue that is more prominent in society than one might think, especially in Iowa, which is home to one of the biggest routes for trafficking, Interstate 80.

The lecture included signs of abuse and coercion in sex and labor victims, strategies health-care providers can use to intervene, and resources available that medical professionals could use to identify and aid trafficking victims.

Attendees also left with resource cards meant to be given to someone who may be a human-trafficking victim.