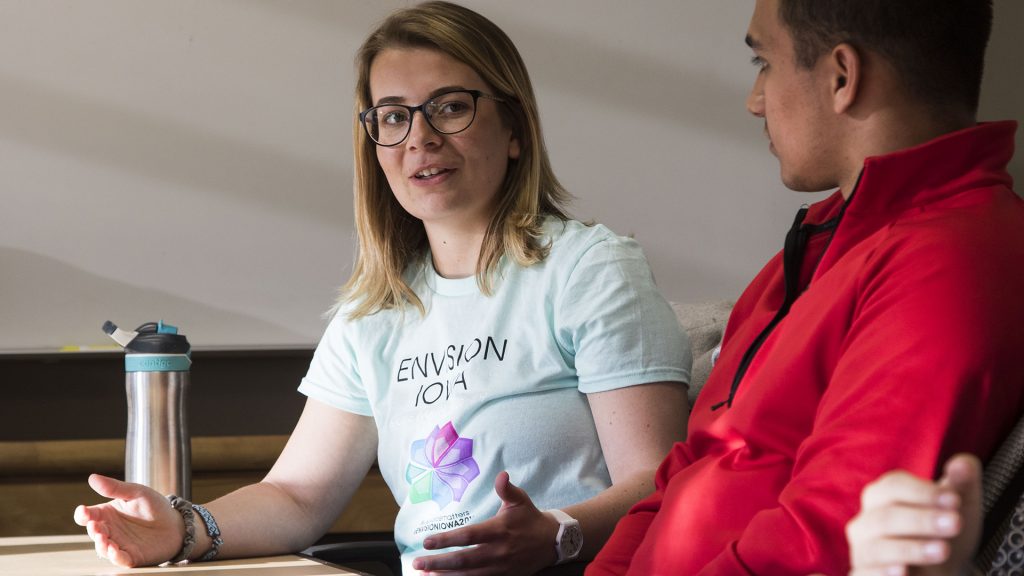 Members of the Envision Iowa party speak in an interview with The Daily Iowan in Adler Journalism Building on Wednesday, March 21, 2018. (Lily Smith/The Daily Iowan)

Envision Iowa, one of four campaigns running in the University of Iowa Student Government election, hopes to bring new faces to lead the organization.

Presidential hopeful Kyle Apple is running atop the ticket with vice-presidential candidate Lucee Laursen [a DI columnist] and 21 senatorial candidates to lead UISG in the 2018-19 academic year.

“One thing that is unique about us is that none of us are involved in student government,” Apple said. “We really want to devolve that power back to the students, and we want to be their representatives, we don’t want to be our own representatives.”

As a part of the outreach plan, Laursen said, the members aim to require senators to log office hours and invite student groups to participate in round-table discussions and UISG meetings.

“What we would like to see is having them off-campus as well, specifically around sorority houses, [near] downtown residential areas, some areas that are highly populated by college students,” Apple said.

In the fight for tuition affordability and predictability, the group plans to advocate for a student representative from the University of Iowa to be on the state Board of Regents.

Senatorial candidate Ryan McDaniel said he joined Envision Iowa because of its dedication to diversity, and he wanted to help champion connection to multicultural organizations on campus.

“The reason I’m getting into student government is that there’s a lot of portions of me and my identity and how I’ve been involved on this campus that I feel are very underrepresented,” McDaniel said. “We can really build a bridge through that gap so that all parts of this campus can feel like home for our students.”

The sophomore is an engineering student and a resident assistant for the UI’s first LGBTQ Learning and Living Community in the dorms.

“I’m an advocate for a lot of communities that are traditionally marginalized, and I want to make those meaningful changes that will add to visibility,” he said.

One of Envision Iowa’s campaign platforms includes relaxing the greek life alcohol moratorium while still prioritizing student safety. Twelve of the 21 senatorial candidates highlight involvement in a sorority or fraternity.

Despite not logging in nearly any UISG experience, the group members say they bring a refreshing perspective from outside the organization.

“I think what we lack in UISG experience, we make up for in the fact that we have experience on this campus, being in organizations that may or may not have already been involved in UISG previously. So more than anything we bring new voices,” Laursen said.

Apple received criticism Wednesday after a 2015 tweet of his surfaced on social media disparaging the idea of replacing Andrew Jackson on the $20 bill. He has since apologized for the tweet, and the ticket has filed an election-code violation in response. The investigation is ongoing; it is unclear whether there was a violation.