CAB, Association of Latinos Moving Ahead, and Revolution Dance Company hosted their first-ever “Mock Quinceañera” on the evening of March 22. The event featured traditional events, food, music, and dancing. 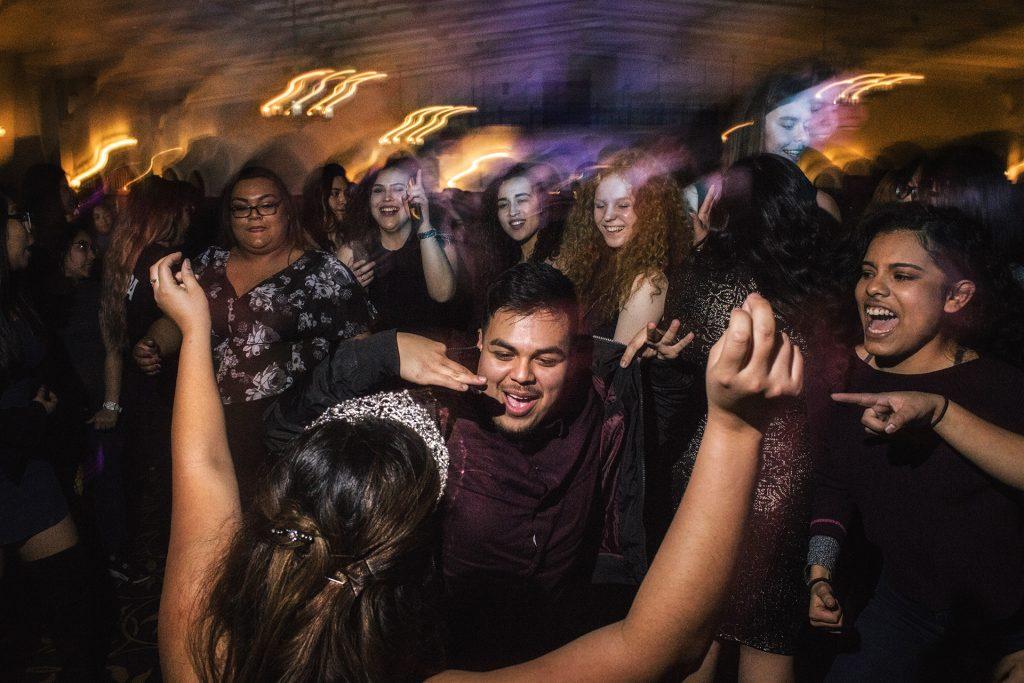 UI Sophomore Mayte Gomez-Cruz dances with the crowd during a mock Quinceañera celebration at the IMU on Thursday, Mar. 22nd, 2018. A Quinceañera is a coming of age ceremony in hispanic communities to mark a woman's 15th birthday. (James Year)

For many Latinas, their 15th birthday marks the important coming-of-age milestone of the quinceañera. The traditions and festivities of the celebration were relived by University of Iowa students and faculty in the IMU on March 22.

For the first time, the Campus Activity Board, the Association of Latinos Moving Ahead, and Revolution Dance Company collaborated to re-create a traditional quinceañera. The mock celebration gave UI students the chance to experience an authentic quinceañera firsthand.

Hobson said most of the quinceañera was made up of UI students. Mayte Gomez-Cruz played the 15-year-old and two married faculty members, Maria and John Bruno, acted as her parents. Other roles included Mayte’s godparents and quinceañera court, which is traditionally filled with the birthday girl’s closest friends, cousins, and/or siblings.

Free empanadas, rice, chips, and salsa were available for guests as they waited in anticipation.
RELATED: UI Latino numbers rise
Gomez-Cruz emerged with an elaborate, puffy purple dress and walked through the IMU Second-Floor Ballroom to cheers. As part of her coronation, she received a glittering crown and ring.

“There is a lot of cultural meaning,” Latino Association Vice President Jheison Chinchilla said. “It’s the moment she goes from a little girl to an adult.”

Gomez-Cruz’s parents for the night helped change her shoes from flats to heels. Hobson said the ceremonial changing of shoes symbolized a 15-year-old girl becoming a woman.

The Brunos also presented Gomez-Cruz with her “last doll.”

“The last doll is a traditional thing. The whole thing is her becoming a woman, so this is like the last doll you’ll get,” Hobson said. “It’s a big deal, and usually, it’s a nice, porcelain doll.”

The first dance of the night was the quinceañera girl and her father. She slow danced across the floor with both parents.

The Latino-based dance group Revolution Dance Company was responsible for choreographing the dances of the night. Dance company members also made up the quinceañera court.
RELATED: Delving into Latino ancestry: Q&A with Frances Aparicio
“One of our missions is to spread cultural awareness with our dance styles to Latinos and also to other ethnicities,” Revolution Dance founder and co-choreographer Gissela Cabrera said.

For their waltz, the quinceñera court performed a choreographed routine involving twirls, slow dancing, rose petals, and even a lift of Gomez-Cruz into the air.

The celebration finally culminated in an open dance floor, in which guests could dance until midnight to upbeat Latin music and colorful flashing lights.

“We won’t touch base with every single tradition because obviously, there’s a lot of countries that do things differently,” Cabrera said. “But getting the main gist of it and introducing people to [the quinceañera] is definitely going to be a great experience, not only for the people learning but also for the people teaching it.”