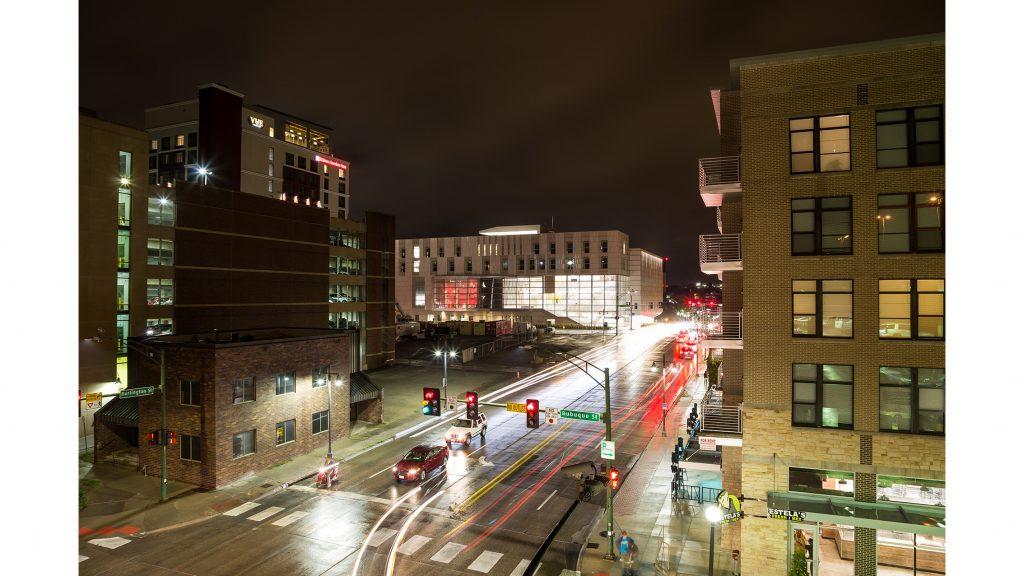 The corner of Dubuque and Burlington streets at night on Friday, Oct. 6, 2017. (David Harmantas/The Daily Iowan)

Johnson County comes up short against other Iowa counties in issues regarding the environment people live in.

A recent report published by the County Health Ranking & Roadmaps program, a collaboration between the University of Wisconsin-Madison Population Health Institute and the Robert Wood Johnson Foundation, a large philanthropy organization, ranked almost every county in the nation in terms of health outcomes and health factors.

Johnson County held up well against the rest of Iowa in most fields, especially in clinical care (in which the county ranked first), but it was ranked 83rd in the state for physical environment. This category includes air pollution, drinking-water violations, severe housing problems, long commutes, and driving alone. The data were collected from the U.S. Census Bureau.

Kate Konkle, an Action Center Team Director with County Health Ranking, said the data and rankings help counties so they can see where they need to improve, and they also provide resources for people who want to help improve the quality of life in their county.

“The rankings really show us that where we live matters to both how long and how well we live,” she said.

Johnson County’s percentage of households with at least one housing problem, such as overcrowding, high housing costs, or lack of kitchen or plumbing facilities, was 19 percent, 7 percentage points above the state’s average.

County Supervisor Lisa Green-Douglas noted responsibilities for housing are split among cities, homeowners’ associations, and the county, making it difficult for any one entity to make many changes.

“It’s a little tricky when you address housing in the county because it’s a different situation in and outside of the cities,” she said.

One way the county is trying to help with affordability is allocating funds to the Housing Trust Fund of Johnson County, a revolving loan program allowing people to get interest-free loans to pay for their homes. This year, it offers $248,000 in funding.

Air pollution and commutes are closely connected, and the county is working to address one by helping with the other.

Josh Busard, the director of the county Planning, Development, and Sustainability Department, said the amount of traffic in areas such as Iowa City and North Liberty creates air pollution, and officials have tried to improve both by adding more trails and encouraging using transit systems instead of single-user vehicles.

“It is a problem, and the Board of Supervisors has been actively addressing it for many years,” he said.

Green-Douglas said many of the programs in the county’s green initiative indirectly affect air quality, such as programs to improve water and using solar energy to help power Johnson County buildings and cars.

“It doesn’t specifically address air quality, but it creates that consciousness of how we can do things that are greener …” she said. “Ultimately, air quality will be affected.”

Drinking water violations go hand-in-hand with housing, which gives Johnson County less room to help, but Green-Douglas said the supervisors are discussing a possible change in the permit process for homeowners’ associations. If county officials could test the water before homes are built, they could determine whether it’s safe before neighborhoods are built and begin to use that water.

Green-Douglas said one thing to remember with reports such as this one is the differences between counties that could affect their statistics. Johnson County is one of the more urban counties in Iowa, which can affect commutes and air quality.

“When you see statistics, the numbers don’t lie, but the way they’re portrayed kind of gives a slant to it, so you have to think about what they’re looking at and what factors could change it,” she said.