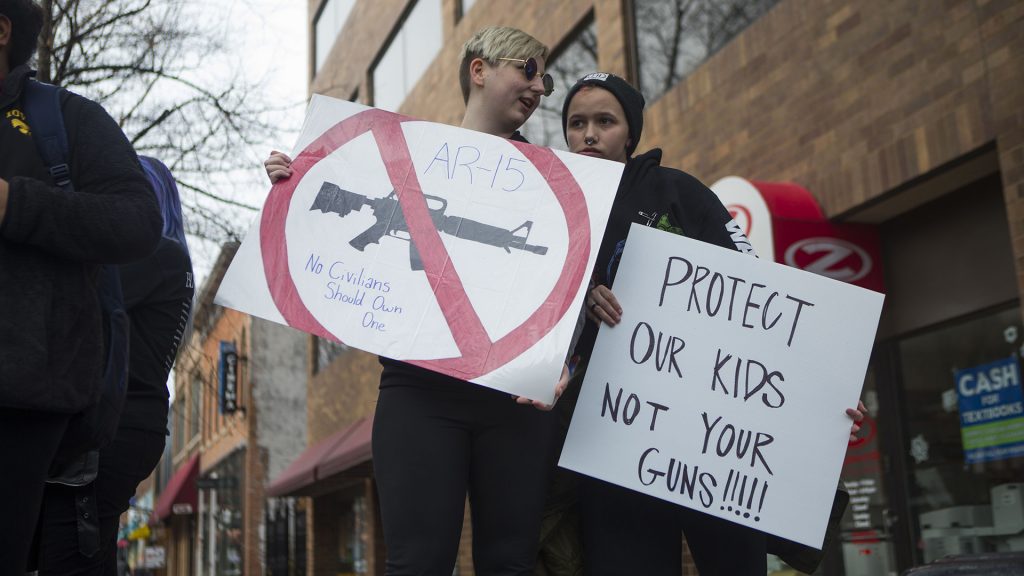 Thousands of students across the country marched to protest the inaction of Congress in response to gun violence this month.

Hundreds of Iowa high-schoolers from Des Moines to Iowa City and beyond joined the peaceful demonstrations. Organized in the aftermath of the lethal shooting at Stoneman Douglas High in Parkland, Fla., on Feb. 14, these walkouts have ignited a national debate surrounding the Second Amendment.

In the U.S. Constitution, the full text of the amendment reads “A well regulated Militia, being necessary to the security of a free State, the right of the people to keep and bear Arms, shall not be infringed.” The exact meaning of these 27 words has been chewed over by lawmakers, historians, lawyers, and private citizens since its ratification in 1791, but in more than 200 years of discussion, no single argument has won.

One of the most common controversies encompassing the amendment is found in its opening: the concept of what forms a well-regulated militia.

Eugene Volokh, a professor in the UCLA School of Law, said the original definition of a militia during the time of the founders was restricted to white males ages 18 to 45. The members of the militia bought, outfitted, and maintained their own weaponry, waiting to be called to muster should the community or nation be attacked.

“The Founding Fathers knew the difference between a militia and a mob,” said Saul Cornell, a historian at Fordham University. “An armed mob was a threat to liberty, a well-regulated militia was the proper defense of liberty.”

Eric Ruben, a fellow with the Brennan Center for Justice at the New York University School of Law, agreed with this concept, saying the Second Amendment was originally included in the Constitution as a safeguard against the threat of domestic or foreign tyrannical forces.

“[The ratification] was happening just after the revolutionary forces defeated the British, which they viewed as a tyrannical government, and it’s happening in the context of the drafting of the Constitution, which centralized power in the federal government,” he said.

There was some concern among anti-federalists that the newly enacted Constitution would be used as a tool to disarm the state-controlled militias, because it granted the federal government the ability to regulate the organization and arming of the forces, Cornell said. The Second Amendment was included in the Bill of Rights in order to ease some of these worries.

The militias, although in many ways more loosely restricted than private citizens today in terms of accessing weapons, did include regulations. Robert McWhirter, a criminal and constitutional lawyer from Phoenix, said the rules found in the groups were just one part of a larger context of gun control at the time of the founders.

“Guns have always been regulated; people seem to think that a right is abridged if you regulate it, but of course, that’s ridiculous. Every right was subject to regulation, including the right to bear arms,” Cornell said. “In the decades after the Second Amendment [was ratified], gun regulation got more robust, not less robust.”

Regulations on guns under the newly minted amendment ranged from the storage of explosive black powder to where militia weapons would be kept for use, often changing from state to state. There even existed prohibitions on certain types of weapons, similar in effect to the recent proposed bans on assault rifles.

“From an early time in our history, and this is going back to the 1800s, certain states thought it necessary to ban certain types of weapons that they thought were unduly dangerous or often used only in crime,” Ruben said.

The 2008 Supreme Court case District of Columbia v. Heller brought some clarity to the modern debate over what regulations mean in a contemporary context. Clayton Cramer, a historian and author from Boise, Idaho, said the case settled the argument over to whom the right to keep and bear arms applied. The 5-4 decision meant that individuals had an inherent right to own a gun for lawful purposes.

The 2010 Supreme Court case McDonald v. City of Chicago further clarified what a state or local government could or could not enforce while regulating the right. It was brought forward in part by the Second Amendment Foundation, a Bellevue, Washington, advocacy group that defends Second Amendment rights.

“This was a good case,” said Dave Workman, a spokesman for the group. “It’s part of a strategy; the best way to describe it would be strategic litigation. You find good clients to challenge bad laws, and you go to court.”

In a 5-4 split, the case incorporated the right to bear arms to states and their political subdivisions.

“This is a more important ruling I think, than even Heller, because it opened up a lot of laws that have been passed over the last 75 to 80 years by states, counties, and even local municipalities that are egregiously restrictive on individual right to have a gun in your house,” Workman said.

Focusing with a more local lens, the Iowa Constitution and state legislation has been slowly shifting to become more inclusive toward the Second Amendment, with the passage of HF517 into law in 2017 marking the most significant piece of gun-rights legislation the state has ever seen.

“We’ve gained significant ground as far as recognizing the Second Amendment rights of Iowans, including even carrying in our Capitol,” said Derek Drayer, the communications director for the Iowa Firearms Coalition, a Philadelphia based nonpartisan group focused on the U.S. Constitution.

These moves have raised some concerns among gun-control advocates at the national and local level.

“This is just a matter of straightening out the issue, a kink in the system in a sense,” said Teagan Roeder, a core member of Students Against School Shootings, an Iowa City activism group founded in the wake of the Parkland shooting. “With freedom of speech, you can’t yell fire in a theater. There are restrictions in freedom of speech, and in my personal view — this isn’t the view of [Students Against School Shootings], it should be more or less the same way.”

With regards to how the Supreme Court will look at the Second Amendment in the future, historians and gun-control advocates remain realistic.