Baseball loses at home, struggling on the mound and in the box 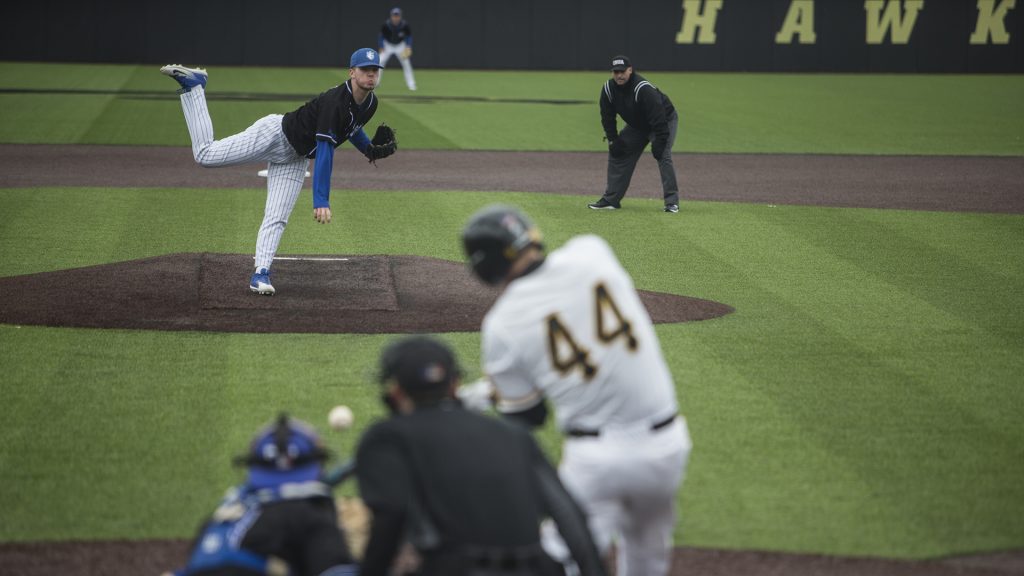 In its 7-6 loss against St. Louis on Tuesday, Iowa baseball learned quickly that allowing free bases and not capitalizing on existing runners can jeopardize one’s chances of winning.

The Hawkeye pitching staff allowed 15 free bases that led to the loss.

“We were really sloppy on the mound,” head coach Rick Heller said. “We had four free bases in the first inning and then followed it up with 11 more throughout the course of the game. You’re not going to win many games doing that.”

The Hawkeyes dug themselves a hole early as the Billikens scored 1 run on an error and a wild pitch in the first inning. St. Louis then tacked on another in the third inning on a homer to right before Iowa had the chance to answer.

To lead off the first and third innings, designated hitter Chris Whelan kept the bases warm for the Hawkeyes by sneaking 2 singles through the infield.

It wasn’t until the third inning that it mattered. Two walks followed Whelan’s hit to load the bases with 2 outs, and the Hawkeyes were close to at least cutting the deficit in half.

The number of hits collected in a game doesn’t always matter if they’re timed well. For the second hit of the inning, third baseman Matt Hoeg roped a single over the shortstop’s head to plate Whelan.

Then in the seventh inning with the bases loaded, Hawkeye freshman Kole Kampen let Ritter out of the jam with a fly ball to straightaway center.

“Just like any other at-bat, just do what you can to get the next guy out,” Kampen said. “I don’t really worry about who’s on bases or not.”

The Hawkeye bats were quiet after the seventh-inning stretch, but the Billiken offe nse didn’t take a break. The lone run came from a long, high homer to left, making the score 7-4 in the top of the eighth.

After two quiet half-innings by both teams, the Hawkeyes entered the bottom of the ninth in a 3-run deficit.

After a walk and a single by Hoeg to start the inning, Ben Norman, who had entered the inning in left field as part of a double switch, roped a double to the wall in right center to cut the deficit to 1. But Iowa couldn’t bring in the final run to tie the game.