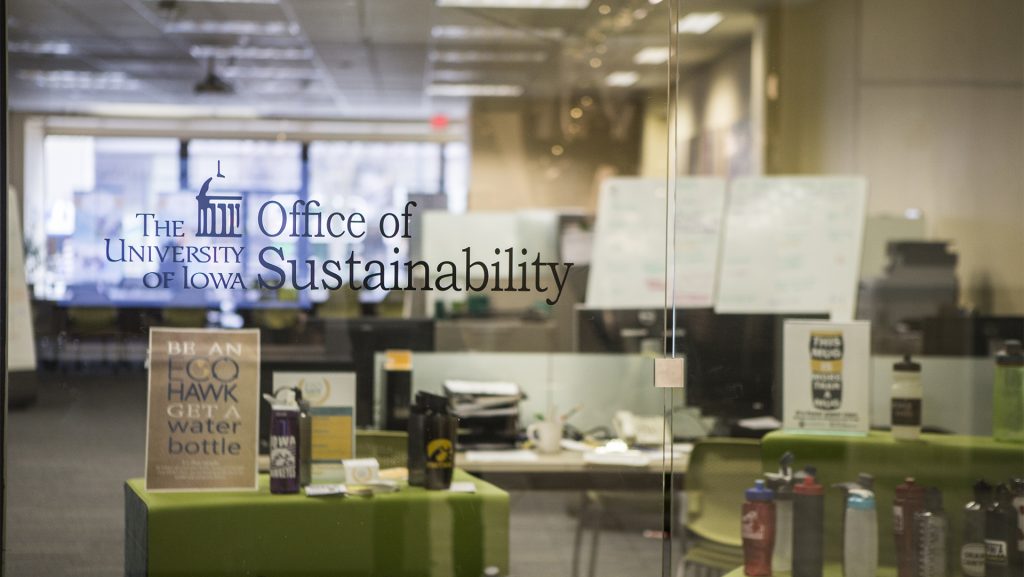 The University of Iowa Office of Sustainability is pictured in the Old Capitol Mall on Clinton St. UISG voted on a bill to allocate $1,738 this year for a Renewable Energy Educational Development trip, each semester. (The Daily Iowan/Ben Smith)

On Saturday, a free event will be held in collaboration with the UI Office of Sustainability for RecycleMania, honoring the spring semester theme “Climate for Change.”

Plasticity: Our Changing Oceans will take place from 10 a.m. to 4 p.m. in the Visual Arts Building; it is an interactive exhibit educating the public on the dangers of pollution.

The project was brought to life by UI graduate student JD Whitman; it aims to educate the Iowa City community on the importance of conservation and how pollution affects marine life. The free exhibition allows patrons to venture inside of various inflatables, nearly 14 feet high and 12 feet wide, that have ocean scenes projected onto them.

The project imitates the experience of visiting a tunnel aquarium while educating the public on environmental issues.

“My main goal is to bring the wonder of the ocean to viewers — I want them to witness the beauty of the immersive realm and be captivated by the uncanny organisms that thrive there,” Whitman said. “I want viewers to be inspired by the life that exists beneath the waves and be made aware of how plastic pollution is threatening that life.”

The exhibit is family-friendly and encourages children to engage through various educational activities. Patrons can hunt for marine species, help create a public art mural, and take part in recycling-theme games.

Whitman, who has been a scuba diver for 15 years, has seen a severe change in ocean environments, and she hopes to show the public the effects humans have on marine environments.

“The once pristine coral reefs and open waters have become wastelands of floating, ensnaring plastic trash,” Whitman said. “Individual species and entire ecosystems are threatened due to the inundation of plastic that we allow to end up in the ocean. I wanted to create this exhibit to address my concern for this growing, global issue.”

Whitman took Assistant Professor Daniel Fine’s Installations and Interactive Performance class last year, in which she did various versions of the exhibit for assignments. Fine worked with her on the development of the exhibit in addition to guiding her in an independent study using After Effects, which has helped her to create animations used in the exhibit.

“It’s a really artistic, interactive, and immersive exhibit that’s a really cool experience for students and family audience,” Fine said. “Beyond the ‘cool factor’ of being inside of an inflatable that’s being projected onto, the subject matter is a really important issue.”

Ted Brown, a student in Fine’s class with Whitman, worked on the technical aspects of the exhibit, helping with projections and technology. He said that after seeing the various iterations of the project in development, he agreed to help Whitman with her thesis exhibit when approached.

“What excites me about JD’s work, is its ability to teach and inform in a fun and visceral way,” Brown said. “For those who go through the exhibit, I think they will gain an appreciation for what JD is trying to get across. Going through the installation is an amazing experience.”

Overall, Whitman said, the event seamlessly ties “Climate for Change” to the community.