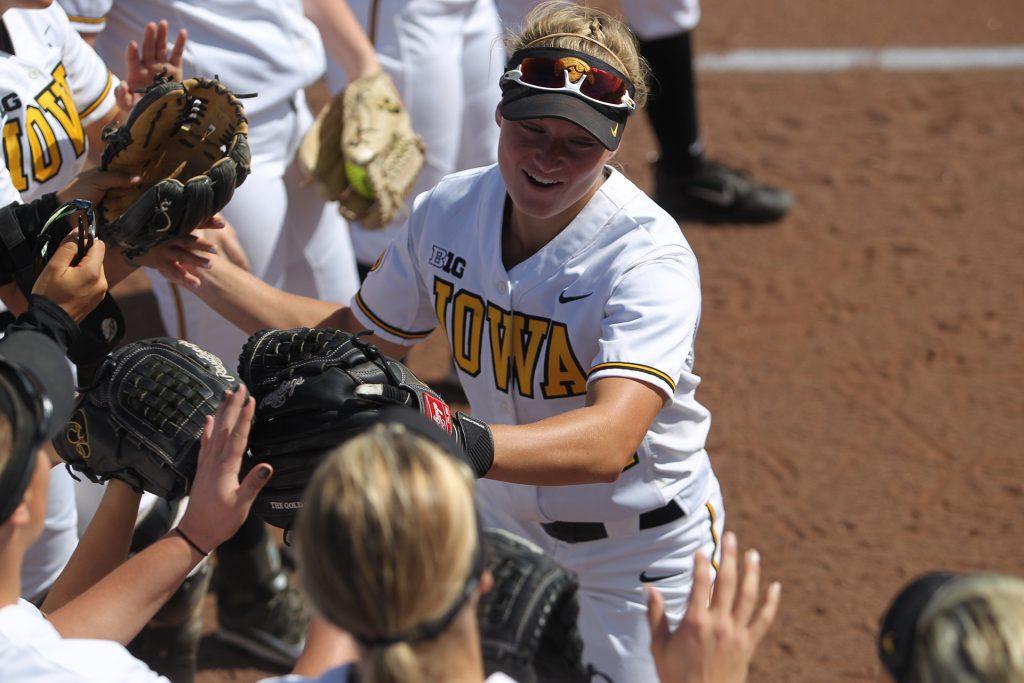 Aralee Bogar gets a nice introduction from her teammates before their game against Iowa State Saturday, Sep. 30, 2017. (Paxton Corey/The Daily Iowan)

The Hawkeye softball team improved to 12-10 after sweeping the first day of the Creighton Invitational and then falling in the tournament finale.

Iowa finished off the weekend on Sunday against Wichita State for the second time.

The Hawkeyes had a 5-2 lead following a 4-run top of the third before the Shockers took control in their half of the inning, plating 5 runs. That proved to be the difference, with the final score ending 12-5.

However, the weekend wasn’t all bleak for Iowa. On the first day of competition, the team took down Wichita State in their first meeting, 3-2, before topping Creighton, 4-3.

In the bottom of the first against Wichita State, the Hawkeyes took an early lead on an RBI triple by Allie Wood, the first of her career.

The Shockers then took advantage of an error to tie the game in the second and plated one more in the fourth to take the 2-1 lead.

Wichita State held the momentum until the sixth inning when another career-first RBI triple by Taylor Libby tied the game at 2. Then freshman shortstop Aralee Bogar hit into a fielder’s choice to plate a run, putting Iowa on top for the 3-2 win.

Kenzie Ihle recorded 2 strikeouts and allowed only 2 hits on her way to a win. It was her first for Iowa.

The Hawkeyes came from behind in the next game, against Creighton. The Bluejays had a 3-0 lead in the sixth inning after an RBI single and a costly Iowa error.

McKenzie Schneider, hero of the win against top-10 Baylor two weeks ago, roped a grand slam over the right field wall to give Iowa the winning runs in the seventh inning.

“We could have made it easier on ourselves by attacking early,” head coach Marla Looper said in a release. “We had plenty of base runners on, but these two wins do show the fight they have to keep going late in the game.”

The Hawkeye defense committed 6 errors during the weekend, leading to the loss against Wichita State and the two close games.

Errors have proved to be the difference between wins and losses in the beginning of the season, but with the offense finally stepping up and attacking for those come-from-behind wins, the effect is less immediate.

However, in the loss against Wichita State on Sunday, the 3 errors led to 5 runs. The strain on the pitcher in those situations can change the game.

Iowa will make its home début on Wednesday with a double-header against South Dakota State. Looking forward to the weekend, Big Ten competition will begin with a home series against Michigan.