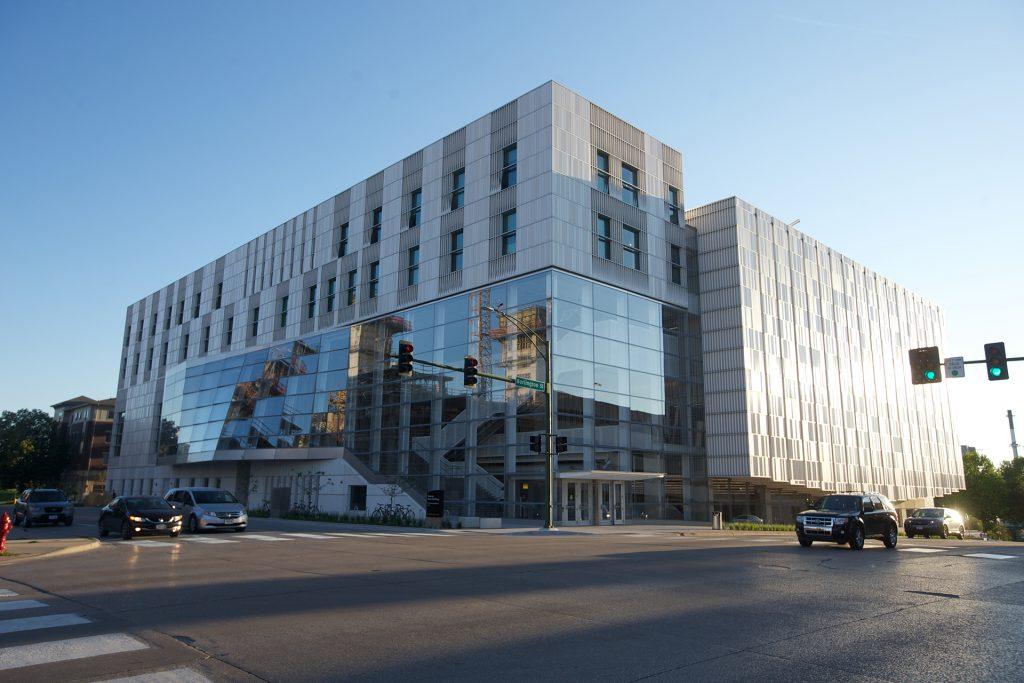 The University of Iowa School of Music is being moved to the newly built Voxman Building. The building is located at 95 East Burlington Street. (The Daily Iowan/Karley FInkel)

Fifty-two Hawkeyes will take their musical talent more than 4,000 miles away from home during this spring break.

The trip will be led by Professor Richard Heidel and Professor Kevin Kastens, combining students from a vast range of majors who wish to perform music abroad.

From March 11 to March 18, the musicians will tour in Northern Ireland and the Republic of Ireland and perform a series of concerts.

When he was appointed as the new director of bands in 2002, one of Heidel’s long term goals for the School of Music was to organize a trip abroad for members of the university. The UI Symphony Band performed in Europe in 1966, and the Johnson County Landmark Jazz Band has played festivals in Europe.

A few of the sites the group plans to visit include The Irish National Famine Museum, Ballintubber Abbey, and the Saint Patrick’s Day Parade in Dublin. They will also collaborate with a community band and orchestra during their performances.

Heidel said the 2008 Iowa River flood was a large reason that the project was delayed for so long; the flood destroyed the original Voxman Music Building, along with Clapp Recital Hall and the original Hancher.

With the new Voxman Music Building opening not that long ago, Heidel surveyed students suggesting the idea of an spring-break international trip and was met with overwhelming support.

Ireland was selected as the destination because of the country’s deep love of music over the centuries.

“Music has been important to people of Ireland for a very long time, so they appreciate [it],” Heidel said.

The repertoire includes pieces native both to Ireland and the United States, with Heidel emphasizing the importance of combining music from different cultures.

“This is becoming more commonplace among conductors to have good diversity among programming,” Heidel said. “For our students, to be able to rehearse and prepare for Ireland is very important and significant. The Irish audience members will be honored that a band from the United States has prepared music for their homeland.”

UI junior Andy McDonald, a percussion player for the band, said he was ecstatic to sign up for the trip, especially as a music-education major.

“The band crew is fantastic, so I knew it was going to be fun trip and we were going to play fun music,” he said. “It’s always interesting to see what’s going on [in other countries], especially in music education.”

UI senior and clarinetist Devan Cummings also signed up for the trip.

“I don’t have a lot of experience internationally,” she said. “I always wanted to travel to Europe, and this seemed like a huge opportunity.”

Cummings looks forward to exploring the scenery Ireland has to offer.

“It’s very green and very different from where we are here,” Cummings said. ‘I don’t see a lot of that from Iowa City, so it’ll be interesting to see how different it is.”

Heidel’s ultimate goal for the trip is for everyone to come together through music.

“I hope they bond and our students become closer,” Heidel said. “When musicians come together and they perform, it’s a very special experience.”

McDonald also views the trip as a valuable experience for everyone.