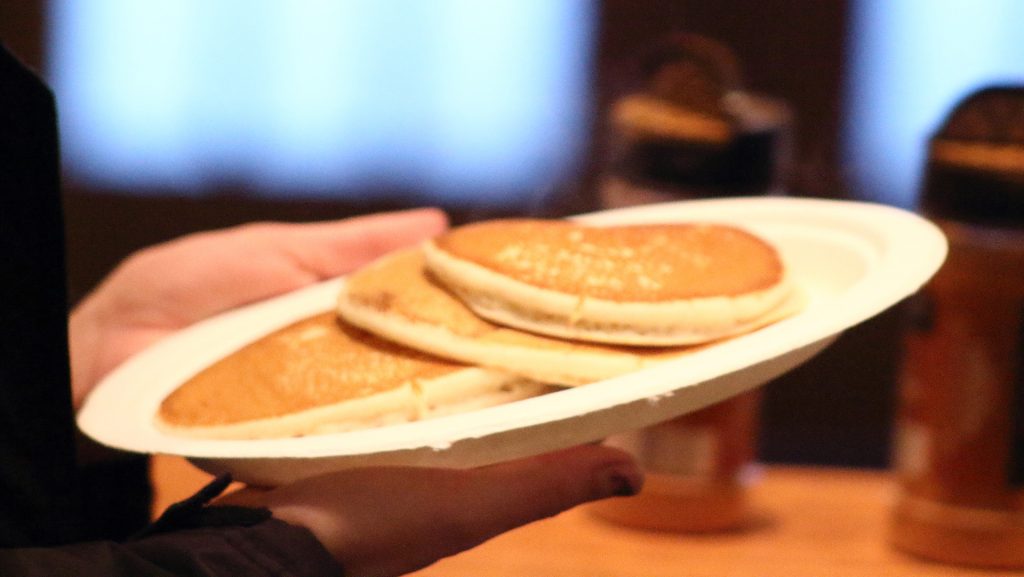 Pancakes made by the Pancake Man for students in the IMU on Monday, Dec. 11, 2017. The event was part of finals week events held to relieve the stress of students. (Ashley Morris/The Daily Iowan)

In Our Redeemer Lutheran Church, 2301 E. Court St., on Sunday, laughter and conversation could be heard over the sounds of sizzling griddles, and the smell of syrup and sausage floated above crowds of families eating a good meal for a good cause.

The Crisis Center of Johnson County and the church put on their 10th-annual pancake breakfast on Sunday. Tickets were $6 for adults, $3 for children, and all the proceeds went to the Crisis Center.

This is the 45th pancake breakfast put on by the Lutheran church, but only the Crisis Center’s 10th. Pastor Brent Hartwig, who has been with the church since the start of the partnership, said he has seen a change in the reason people come and donate.

Proceeds from the breakfast will go toward the day-to-day operations of the center, Communications and Development Director Sara Sedlacek said. The center has a 24-hour crisis line, and people can contact a counselor through phone calls, talk, and text, as well as having counselors go out into the community to help.

Its Food Bank supplies weekly supplemental groceries and utility and housing assistance, among other things. The Food Bank serves approximately 13,000 individuals each year, and the center responds to 30,000 crisis contacts annually.

“This helps us keep our doors open,” Sedlacek said.

RELATED: Letter to the Editor: Working at the Crisis Center

Funding the plans to expand the Food Bank warehouse have been going well, communications coordinator Carly Matthew said, so these funds won’t go toward it. Right now, the Food Bank serves around 250 families a day and 1,000 families a week.

She noted the prices for building materials have gone up since hurricanes battered Texas and Florida, creating the need for more funding for the warehouse, but the Food Bank is close to its goal, so the people there aren’t worried.

Sedlacek said the breakfast is the center’s second-largest event, typically serving around 1,200 people and raising up to $15,000. Its largest is the food banquet in June, which has raised up to $50,000.

Toyota was the premier sponsor for the event for the second year, and McDonald’s provided coffee to go with the pancakes. Matthew said sponsors also donated essentials such as butter and milk.

“These allow us make a wider profit from this and help people even more than we might be able to otherwise,” she said. “We have a lot of community support.”

Hartwig noted that the community wants to give to the center because of all it does, and this way of donating gives good things to both parties. The church is there for those seeking spiritual help in times of crisis, but those at the center are the specialists in finding out what people need.

Sedlacek said she feels the love at events such as the breakfast.