Get ready because Motown: The Musical will electrify more audiences throughout the next three days at Hancher with classic Motown beats, humor, and Berry Gordy’s inspiring journey toward becoming a major icon in the music industry. 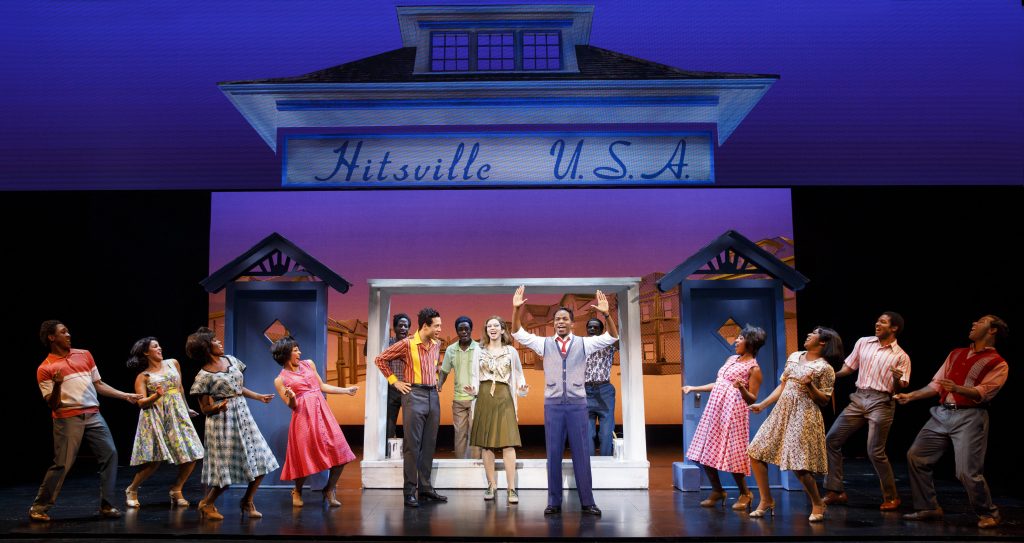 A black curtain inscribed with a luminous Motown logo rises up to reveal The Temptations performing “Ain’t Too Proud to Beg.” The signature choreography and matching outfits provide authenticity to the performance. Similar to a Motown concert, the audience elicits screams, whistles, and claps.

The March 1 performance of Motown: The Musical was an exquisite portrayal of not only Motown’s greatest hits but also Berry Gordy’s journey from an 8-year-old witnessing American boxer Joe Louis defeat German boxer Max Schmeling to becoming a mogul of the music industry.

The musical also includes several historical items of American society, such as racial tension and Dr. Martin Luther King Jr.’s empowering words. During one scene in particular, after receiving news of King’s assassination, the community becomes distraught. People bury their faces in their hands and kneel on the stage as if they just lost all capability in their legs.

In the meantime, however, a racial riot takes place, and Marvin Gaye sings “What’s Going On?” Unfortunately, the musical’s timeline was slightly incorrect. King was assassinated in 1968, while “What’s Going On?” was released a few years later, in 1971. Even still, the impact of the scene remained intense, making the scene worthwhile.
RELATED: “Motown: The Musical” to light up Hancher
Seeing the community’s confusion and fear while they scrunched down onto the ground not only allowed me to see the emotions, it made me feel the emotions. Minorities, and many others, clung to King’s words as if the words were their only hope for a better, more equal society. Once the man and those words were taken away, and communities became anguished, I could feel the despair and frustration the community on stage depicted.

Throughout the entire musical, the Broadway stars danced and sang to almost 60 songs by Motown Artists, such as The Temptations, Marvin Gaye, Smokey Robinson and The Miracles, The Supremes, Diana Ross, The Jackson Five, and Stevie Wonder.

Each cast member captured the essence of these music icons well, seemingly bringing them back into to the live concerts they once performed during Motown’s earlier decades. Through strong vocals, dancing, and familiar outfits and backdrops from each artist’s shows, the Broadway stars immersed the audience into another decade.

In some scenes, The Jackson Five appeared in front of the band’s well-known colorful, geometric backdrop. The familiarity prompted audience members from the Motown generation to say, “Wow,” and “Oh, my goodness,” while also eliciting a few gasps of nostalgia.

More thought-provoking surprises came when Trenyce, who plays Diana Ross, began interacting with the audience by asking people to sing with her. At this moment, two audience members became part of the show, singing the chorus, “Reach out and touch/Somebody’s hand/Make this world a better place.”

However, what really sent chills down my spine is when Trenyce told people to hold hands with the people sitting next to them while raising their arms above them. As the song continued, the audience — from the orchestra seating to the third-floor balcony — began swaying their arms and linked hands back and forth.

“Who cares if you don’t know them … you’re going to meet someone new tonight,” said Trenyce when giving the audience instructions.

This action encompassed everything Motown is about — people coming together, regardless of their differences of opinion or race, to enjoy great music.

The musical flawlessly conveyed obstacles in Gordy’s career, as the large conglomerate record labels attempted to consume each other, making Gordy’s independent record label seem insignificant. However, as we know, it did not stop Gordy from producing music for all races to enjoy. Throughout this discouragement brought on by major record labels, Gordy successfully sustained Motown’s lasting legacy.
RELATED: ‘The King & I’ lives splendidly on
Of course, the performance earned a standing ovation from the crowd, which clapped and sang to every Motown beat the entire night. I am sure that I and several other audience members will be singing and dancing to Motown beats for the next week or so.

Everything considered, I appreciated that Motown: The Musical included historical accounts of Gordy’s journey. These historical references created an excellent learning experience for those, especially younger generations, who are not familiar with Motown and its legacy.

Interestingly, those who focused primarily on learning about Gordy’s history did not participate as much during the music pieces by clapping or singing along.

During a discussion, ensemble stars Isaac Saunders Jr., Devin Holloway, and Brett Michael Lockley, who is also the dance captain for Motown: The Musical, described a time when they toured in Canada.

Because Canada is not as familiar with Gordy’s story as America is, audiences are immensely focused on the learning experience, making audience interaction difficult. However, that did not prevent the audiences from providing the cast with a standing ovations.

At the end, the cast paid tribute to Gordy and Motown’s artists who transformed the music industry into an enjoyment for all races.

Gordy inspired people to be persistent no matter how competitive an industry becomes. As Gordy states in the musical, “Competition creates champions.”

The Broadway stars emphasized the notion that all people can do is continue to be themselves and keep trying.

“There will always be someone better than you … but no one can be you,” Lockley said.