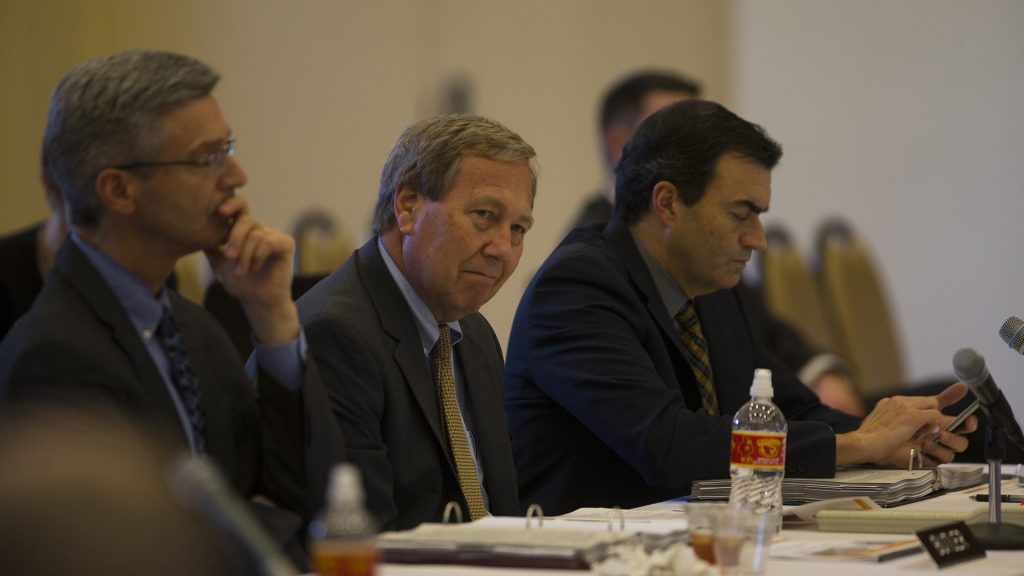 University of Iowa President Bruce Harreld listens during a meeting in the Reiman Ballroom of the ISU Alumni Center in Ames on Wednesday, Feb. 22, 2017. The Board of Regents will have a full board meeting on Feb. 23. (The Daily Iowan/Joseph Cress)

The state Board of Regents released its Annual Graduation & Retention Report for Fall 2017 at its meeting in Ames on Feb. 22. It shows the University of Iowa’s retention rate for students returning for a second year was 86 percent, down 1 percentage point from the previous year.

UI President Bruce Harreld addressed the university’s retention and graduation rates at during the regents’ meeting, pointing out that its rates beat the U.S. average.

In the different minority groups in the report, black students had a lower six-year graduation rate at 56 percent compared with those of other minorities and white students.

“I think at a predominantly white institution, there’s some systemic barriers that we need to continue to address so we can better support those students and create a more inclusive and welcoming environment,” Director of Academic Support and Retention Mirra Anson said.

Anson said that often, students from marginalized populations tend to have less sense of belonging in the campus community.

She highlighted some different resources at the UI that aim to assist minority students in feeling welcome and provide academic support. The resources include the cultural centers, supplemental instruction, and the federally funded TRIO program.

The report showed that students who receive Pell Grants had the lowest six-year graduation rate compared with students who get other types of financial aid or no aid at all. Receipts of Pell Grants often serve as an approximate measure of low-income status for students.

Associate Dean of the University College Andrew Beckett highlighted the number of first-generation student on the UI campus.

“Almost one out of every four of our students are the first in their family to attend college,” he said. “There’s a lot of overlap in Pell Grant and first-generation status.”

Beckett said there has been an effort to focus on how the UI can better serve its first-generation students and assist them in navigating the university with the establishment of the First-Generation Task Force as well as promoting supplemental instruction and tutoring.

What’s next in addressing retention and graduation rates

Both Anson and Beckett emphasized the need to build up such services as supplemental instruction when it comes to addressing retention and graduation rates at the UI.

“A big thing that we are doing is trying to build up supplemental instruction,” Beckett said. “We’ve increased participation 40 percent almost every year. Last year we had 20,000 visits to the Academic Resource Center. I think a lot of this is just trying to change students’ attitudes toward tutoring and seeking help.”

Anson emphasized the importance on working to grow student success through programs such as supplemental instruction.