Thoughts and prayers once again after Parkland shooting. Now what? 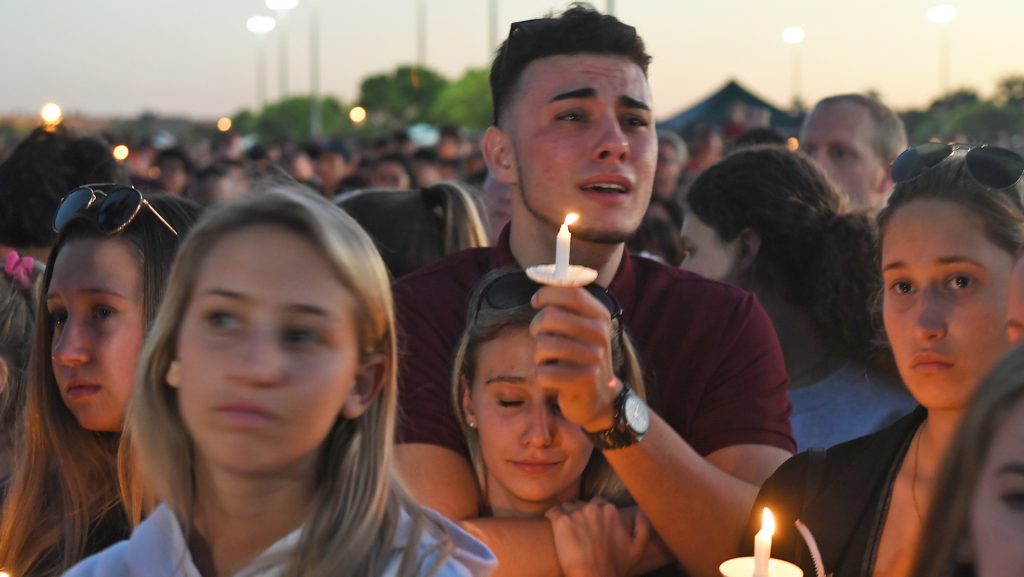 Mourners gather at a vigil that was held for the victims of the mass shooting at Marjory Stoneman Douglas High School in Parkland, Fla., on Thursday, Feb. 15, 2018. (Jim Rassol/Sun Sentinel/TNS)

The conversation over gun rights roars louder than ever following the mass shooting in Parkland, Florida. Students across the nation, Iowa City included, are demanding action from our country’s political leaders to stop the trend.

The following are statements made by Iowa’s two senators (Joni Ernst, R; Chuck Grassley, R) and Iowa’s 2nd District Congressman (Dave Loebsack, D) in the aftermath of recent gun-related tragedies across the country.

The statements were either made on their Twitter accounts or personal websites, and have a similar message: thoughts and prayers are with the families of those affected.

“The government must do better to follow these existing processes to prevent future tragedies. I hope that Director Wray will work quickly to address the breakdowns at the FBI and to cooperate fully with the Judiciary Committee’s oversight efforts. The public deserves answers and accountability so these mistakes are not repeated.”

Please join me in praying for the students, faculty, and staff at Marjory Stoneman Douglas High School, as well as their loved ones. Let us also show our gratitude to the courageous first responders.

“The Sutherland Springs shooting was carried out by an individual who should not have been able to purchase a firearm under current law. While in the Air Force, Devin Kelley was court martialed for domestic violence. He served prison time and was discharged from the Air Force for bad conduct. But because his information was not entered into the NICS system as the law required, Kelley was able to purchase four weapons after his release from prison, including the weapon he used in the Sutherland Springs shooting. Kelley killed 26 people attending Sunday services at the First Baptist Church in Sutherland Springs, and wounded 20 more…”

“What we have to do is to make sure the laws that are in place are being followed. In many of the instances there have been loopholes that need to be closed…”

Praying for the victims + their families of the Las Vegas shooting

“My prayers are with all of the victims in Las Vegas, and their loved ones affected by this senseless act of violence… “As we learn more about what happened in the days ahead, let us come together and show our gratitude to our first responders and the other unsung heroes who put their lives on the line for others.”

I join my fellow Americans in grieving the tragic loss of the men and women in Las Vegas. My thoughts go to their families & loved ones.

I am heartbroken over the news of the shooting at the Fort Lauderdale airport. My prayers are with the victims and their families. #FLL

My heart aches for those who were injured or died as a result of the senseless attack in #Orlando. Read more: https://t.co/Od0RGnfOxd

“We pray for the families who continue to mourn the loss of their loved ones. We pray for all victims of violence, gun or otherwise…We have looked at these issues before, but I welcome this renewed discussion. I think the need for the Judiciary Committee to hold hearings after Newtown is clear.

Although Newtown and Tucson are terrible tragedies, the deaths in Newtown should not be used to put forward every gun control measure that has been floating around for years. The problem is greater than guns alone.”

“And I knew, after the tragedy that happened at Sandy Hook, I knew that when we went back into session that we would hear from our colleagues across the aisle on Second Amendment issues. And, so, I went in prepared to stand up and rebut any of the nonsense that was coming from that side of the aisle because, regardless, it was a tragedy, however, we still have our Second Amendment rights and I’m going to stand up for those.”

“Throughout that time many things have changed, but one thing has remained the same: We must do everything we can to keep students safe. The tragedy that happened at Sandy Hook brought that home for everyone.”