Lee: America’s school-shooting epidemic will not solve itself 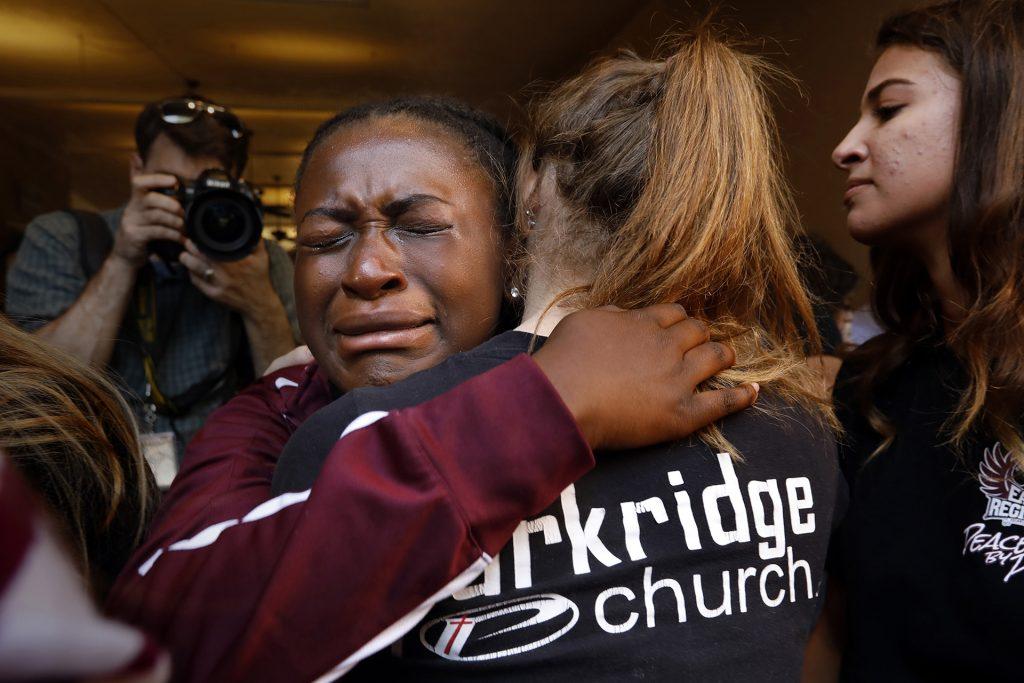 Marla Eveillard, 14, grieves with friends before the start of the community prayer vigil on Thursday, Feb. 15, 2018, one day after the deadly shooting at Marjory Stoneman Douglas High School in Parkland, Fla. that left 17 dead and 14 injured. (Carolyn Cole/Los Angeles Times/TNS)

The Second Amendment was written to protect America’s freedom, which is not in imminent danger.
Ella Lee

In 2012, America was shaken to its core when a gunman attacked Sandy Hook Elementary School in Newtown, Connecticut, killing six adults and 20 children. Today, America mourns yet again, six years later, the loss of 17 students and teachers — victims of Wednesday’s mass shooting at Stoneman Douglas High School in Parkland, Florida.

A Health Affairs study called Child Mortality in the U.S. and 19 OECD Comparator reported that the gun-homicide rate in America is 49 times higher than in countries that have our same financial standing. Also, during this decade, children ages 15-19 were 82 times more likely to die from gun homicide in the U.S. than in past decades. This is because of the escalation of an absurdly vast epidemic of shooting deaths in the U.S. — an epidemic practically nonexistent elsewhere.

As a recent high-school graduate myself, I was appalled by this report. Schools are a place children go expecting to be educated, and more importantly, expecting to be safe. Children should not go to school fearing that their desire to be educated might cost them their lives. Guns have no place anywhere near academic grounds, and policy must be enacted to ensure students’ safety.

The Second Amendment was put in place for a reason, but its original intent has been lost throughout history behind thick partisan lines and unmoving viewpoints. In order to understand it to the fullest extent — to understand when it is to be honored versus regulated — it is critical to dissect it for its true meaning.

The Second Amendment states, “A well regulated Militia, being necessary to the security of a free State, the right of the people to keep and bear Arms, shall not be infringed.” When first written, the Second Amendment was protection against an undesired rise of monarchy in the U.S. A body of people — well-trained and with the sole intention of protecting the country’s freedom — have the right to bear arms.

The view of the Second Amendment has been warped over time to mean that any person should be able to own a gun to protect herself or himself from whatever threat might rise. This is not written in the Constitution. Unless people believe America’s freedom is in imminent danger, they have no business with guns.

RELATED: Gun regulation, or lack of, in spotlight

Some might argue that should an imminent threat rise, people would want to have a gun in their possession already. Perhaps this is a fair argument conceptually, but when purchasing guns, intent is not investigated. It should not be as easy as it is in today’s America to purchase firearms.

Finding a solution to this growing problem in the U.S. will inevitably involve a trade-off. We must either rethink the Second Amendment or accept that children dying for no reason is something our country is OK with.

However, this is not an issue we can just keep sitting on. Since the Sandy Hook shooting, there have been 239 school shootings in the U.S., leaving 438 people shot and 138 killed, according to the nonprofit Gun Violence Archive. In 2018 alone, 18 school shootings have already place across the country. School shootings are becoming a painfully common occurrence in the U.S., and it is vital that we take action immediately.

In a statement after Wednesday’s South Florida shooting, President Donald Trump said, “It is not enough to simply take actions that make us feel like we are making a difference, we must actually make that difference.” The first step toward truly making a difference and protecting America’s future generation is by taking the Second Amendment to heart and refining the process of gaining access to firearms.