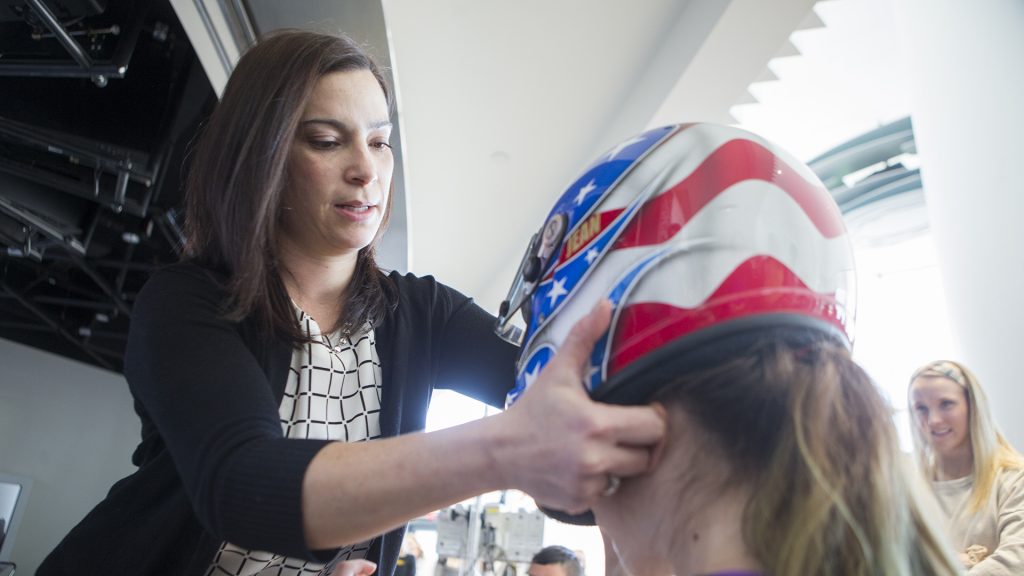 Prahm, who competed from 1996 to 2006 and competed in the Olympics in 2002, worked with the hospital to bring the winter games to Iowa City.

Prahm competed for team USA in the women’s bobsled, when that category was new for the Olympics.

“It was an amazing experience, really, to see where the sport was when I first got involved in 1996,” Prahm said. “Competing on the Olympic stage in 2002 was just an awesome journey.”

The event began with an opening ceremony that included UI Marching Band members and their rendition of the Olympic Ceremony anthem. Patients were encouraged to join Prahm and the Child Life volunteers in various winter games, which included luge and curling.

The children chose their own country to represent, as well as the event they would compete in. This was followed by crafts, competitions in various activities, and a closing ceremony with Olympic-style medals. The activities were created and ran by the Child Life student organization and its volunteers.

“I feel like one of greatest things past Olympians can do is share their stories and their journey and spread some of the excitement that the Olympics bring every four years,” Prahm said.

Prahm and Child Life events specialist Kathy Whiteside organized the event to bring the excitement of the 2018 Pyeongchang Winter Games to Iowa City.

“We really, truly live up to that mission of changing medicine and changing lives and I think some of the kids here today may be a testament to that,” Prahm said. “So I am very proud to be a part of this organization.”

Nicole Stribe, whose child, Harper, is being treated at the hospital, attended the games with her daughter. Stribe said events such as the one held Tuesday are great to keep Harper’s mind off of treatment and what she is going through.

“The whole community just seems to rally around these kids at the hospital … it helps makes something that’s not a very fun situation into a bearable situation,” Stribe said.

Another mother, Patti Gilbaugh, spoke about what the event means to her family. Gilbaugh’s daughter, Grace, attended the event, which happened to be on her birthday.

Grace will undergo surgery soon, and Gilbaugh said the event was a nice distraction from the frequent visits and treatments Grace experiences while staying at the hospital.