Offense is the key … for defense? 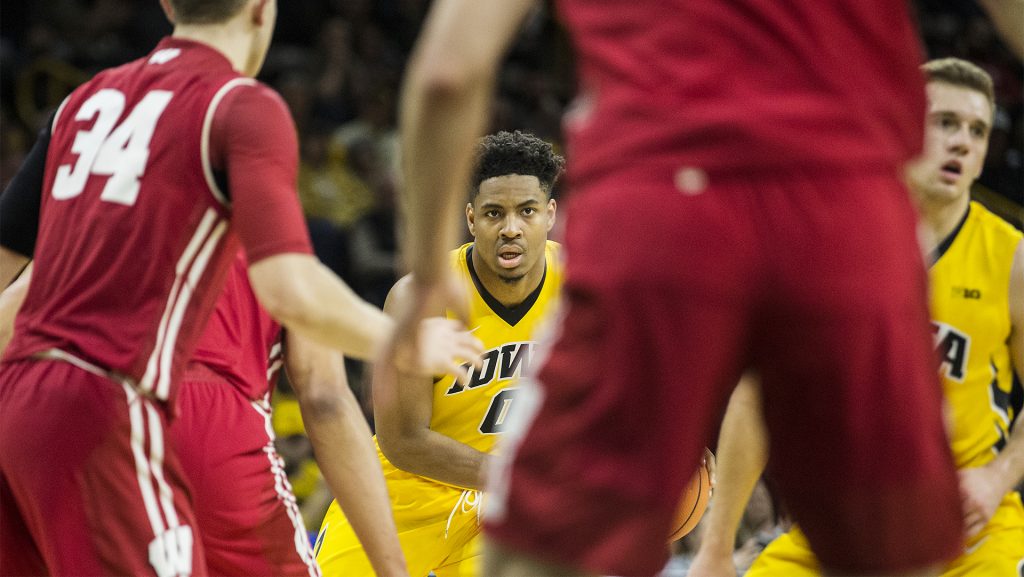 Iowa forward Ahmad Wagner (0) looks for an open pass during the NCAA men's basketball game between Iowa and Wisconsin at Carver-Hawkeye Arena on Tuesday, Jan. 23, 2018. The Hawkeyes are going into the game with a conference record of 1-7. Iowa went on to defeat Wisconsin 85-67. (Ben Allan Smith/The Daily Iowan)

Iowa is 27 games into its season. There are four regular-season games remaining on the Hawkeyes’ schedule before the Big Ten Tournament tips off at the end of February.

Last season at this time, head coach Fran McCaffery had his starting lineup set in stone. This season, however, is a different story. The coach hasn’t shied away from switching up his starting five, but he found some consistency during Big Ten play.

That changed when McCaffery opted to start Ahmad Wagner over Nicholas Baer in Iowa’s 82-64 loss at Ohio State on Feb. 10. The coach noted in his teleconference on Tuesday that he still wanted Baer coming off the bench, but he wasn’t set on Wagner receiving the starting nod for a second-straight game.

McCaffery explained that he started Wagner as a matchup he believed would have worked well against Ohio State’s sensational Keita Bates-Diop, who dropped 27 points when the two teams faced earlier this season. But that raises the question: Is Iowa’s best bet to defeat opponents through defense?

“To solve the problem, you really have to do it from both ends — not just on the defensive end,” McCaffery said during his teleconference.

He noted after the Ohio State game that Iowa has shown flashes of good defense, but only in spurts; there has been little consistency all season long on that end of the floor.

Looking at some of Iowa’s best performances recently (the 85-67 win over Wisconsin, the 94-80 win over Minnesota, and the 96-93 loss to Michigan State), offense, not defense, has been the Hawkeye catalyst.

In the Ohio State loss, freshman forward Jack Nunge, whose name lived in the starting lineup earlier in the season but then his minutes dwindled into single digits, finally found his rhythm. The Indiana native scored 18 points off the bench in 21 minutes of action.

Defense isn’t Nunge’s strong suit; he’s a big man who stretches the floor and has the ability to knock down shots from long range. But Iowa needs another scorer to round out the starting five — Baer and Wagner aren’t those guys.

While McCaffery said he has yet to decide who will start alongside the usual four Hawkeyes tonight against Michigan, he noted that the team has a tendency to fall into defensive lapses, especially in transition when the offense can’t hit shots.

“I do think there’s a tendency to maybe drop off a little bit, but when we get sideways, whether that be with an offense that’s sputtering or some live ball turnovers, it seems to snowball,” he said. “There have been a number of games when there’s a run, or two runs … that really is the only difference in a game. They go on a 14-4 run, you end up losing by 10 or 12, that’s what it is.”

Failing to counter opponents’ runs has been a theme for Iowa this season, but taking a look at Iowa’s come-from-behind, overtime victory on the road against Illinois, the Hawkeyes did find a way to make shots, which sparked a recharged defensive effort.

“The thought process, obviously, is to really bear down at both ends,” McCaffery said. “[We need] to execute offense the way we want to and make sure we get a good shot without turning the ball over, because that always gives you an opportunity to get your defense back and in a decent position.”

Tipoff for the matchup against the Wolverines is slated for 5:30 p.m. in Ann Arbor. The last time Iowa and Michigan faced one another, on Jan. 2, the Wolverines gouged the Hawkeyes from all over the court. The Wolverines led by 18 at one point in the first half while shooting 62.1 percent.

The key for Iowa is quality offense, as its possessions — both good and bad — dictate what happens on defense.