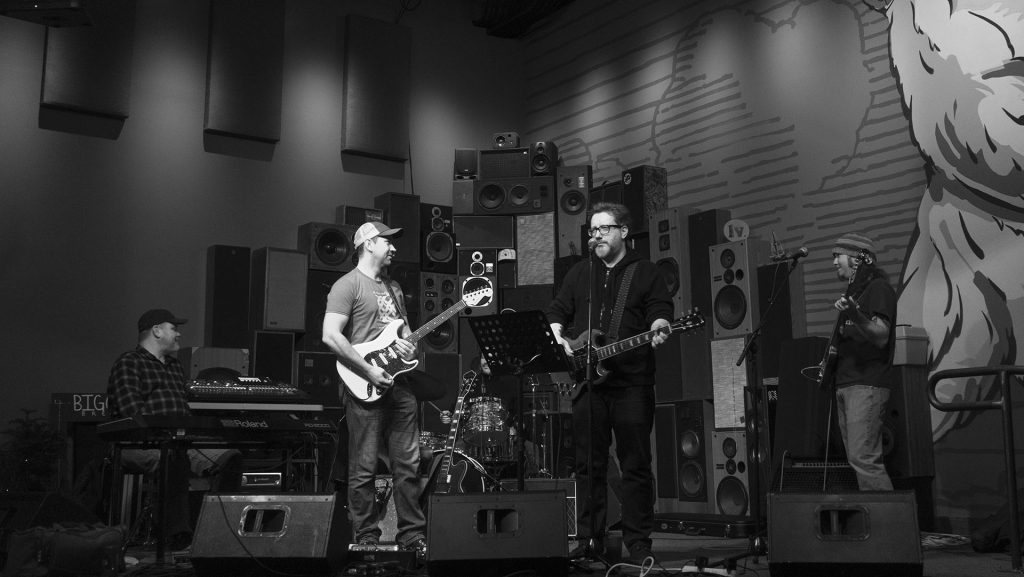 Through an opaque glass door, audience members enter a rectangular room to the side of the stage where a painted mural in the corner features local Iowa City bands, each band taking up a square portion of the artwork.

Ryan Bernemann, the bassist of Jason T. Lewis and Sad Iron Music, sits on one side of the coffee table with tattoos on both arms depicting his music influences.

Tattoos of Jimi Hendrix, The Beatles with their signature Abbey Road walk, Cat Stevens, and Elvis Costello inked permanently on his left arm, as Gram Parsons and Sebastian Bach are tattooed on his right.

Next to him, pianist Sean Seaton holds handwritten sheet music.

“The record industry had two ways to respond — adapt or keep doing what they were doing as long as they could,” Lewis said. “Unfortunately, [the record companies] took the latter.”

Throughout the past decade, Lewis has resumed creating music with a band, forming Jason T. Lewis and Sad Iron Music.

“We are basically a hodgepodge of music Jason [T. Lewis] grew up listening to,” Bernemann said when describing the band’s style.

A fusion of the band’s musical influences, including Bob Dylan and The Beatles, was evident throughout its performance Feb. 9 at Big Grove, resulting in rock ’n’ roll with country undertones.

Set on the triangular stage, Lewis and Sad Iron began playing “Red Light” from its self-titled album Sad Iron Music, released in 2010, eliciting applause and whistles from the crowd.

Hanging Edison lights covered the ceiling and provided a relaxing vibe to the venue, while stacked, unused old speakers were a vintage backdrop behind the stage.

During the performance, the band performed original songs in addition to covers, including Tom Petty and The Heartbreakers’ “Won’t Back Down,” Prince’s “Purple Rain,” and Bill Withers’ “Ain’t No Sunshine.”

Each instrument was noticeable in every song, making each band member essential.

While strumming his instrument, guitarist Brian Schmidt danced by swinging one leg back and forth with his knee bent — bringing Keith Richards to mind.

Meanwhile, Bernamann played the bass guitar to add a counter-melody to the music, and drummer Matthew Bernamann increased the audience’s anticipation as he effortlessly incorporated every part of the drum set to build up to the choruses.

Each song illustrated Lewis’s talent as a vocalist. However, his large range of pitch and ability to refine it was especially impressive as he sang “Ain’t No Sunshine.”

By the end of the night, it was evident that the band members have been playing music for more than 25 years, individually and in other bands.

As for the music industry today, Lewis finds it a little more satisfactory.

“The gatekeepers [or record labels] no longer get to say what is worthy of being heard,” he said. “Anybody who has an iPhone can make a record. I think that’s great — I don’t think that atmosphere has fully matured, but it will.”

In contrast, the live music scene has had a setback in recent years.