With budget cuts for higher education on the horizon in Iowa, the state Board of Regents is holding off on releasing tuition rates. 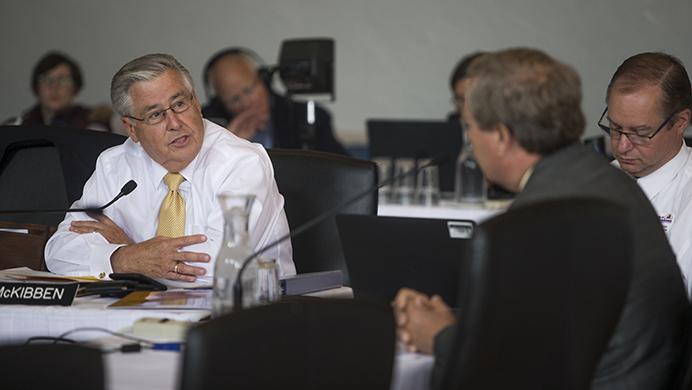 UI President Bruce Harreld takes a question from Regent Larry McKibben during a Board of Regents meeting on June 8, 2017. McKibben chaired the regents’ tuition task force. (The Daily Iowan/Nick Rohlman)

Who goes first in the “cat-and-mouse game” the state Legislature and the regents are playing with funding?

University of Iowa President Bruce Harreld has previously raised the question, and on Tuesday, the regents delivered an answer.

The state Board of Regents released the agenda for its Feb. 21-22 meeting at Iowa State University, and a proposal for tuition rates for the 2018-19 academic year was not among the documents.

An initial reading was supposed to take place at the February meeting, but now, Regent Spokesman Josh Lehman said in an email to The Daily Iowan the first reading of tuition is set to take place at its April meeting, with approval of those rates at the June meeting.

“As there is still considerable uncertainty about state appropriations — both in terms of any FY2018 reductions, as well as setting FY2019 levels — the Board does not yet have enough information to be able to set tuition rates at the February meeting,” Lehman said.

The Iowa Senate passed a proposal Feb. 8 for midyear cuts to the universities amounting to $14.6 million. The legislation will move onto the House, which released its own proposal of $8.1 million in cuts to the regent universities.

Legislators also still have to consider the universities’ fiscal 2019 appropriations request, which includes $12 million in resident undergraduate financial aid to be spread across the three universities.

Normally, the regents give tuition rates an initial reading at its October meeting and take a final vote in December.

After having to hike tuition a second time during the summer in recent years, Regent President Mike Richards has said the regents will only set tuition rates one time and will not go back on those rates, so the regents delayed their vote.