Smith: Why the University of Iowa needs Black only Events 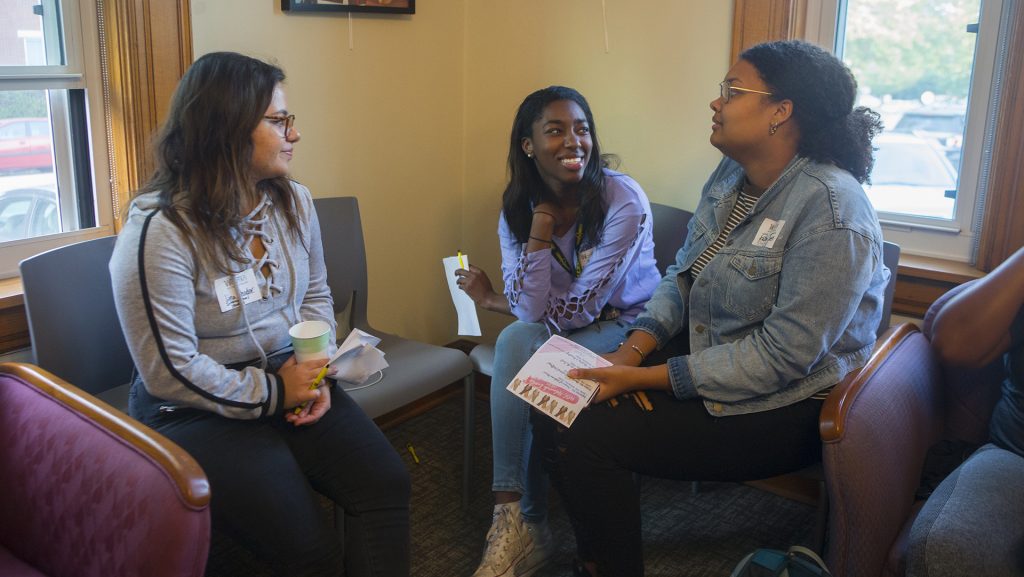 From left: UI students Lina Khodor, Felicia Ogunsanya, and Fatima Tall mingle during the Womxn of Colour Welcome Mixer at the Women's Resource and Action Center on Wednesday, Sep. 6, 2017. It was the inaugural event for the Womxn of Colour Network Series, and will feature a monthly program on a topic affecting womxn of color. (Lily Smith/The Daily Iowan)

Iowa is a strange place. Living in Iowa City, where the population of black individuals is below 10 percent, is something I had never experienced before, and it is constantly changing my viewpoints on race relations. Last year, I would’ve said that all-black or black-only events are wrong.

I’m sure on face value, black-only seems wrong. Separating black kids into areas in which it is just them and excluding other students looks prejudicial. Some may even say it is racist.

But is it? Is asking for a safe place for black students to be black without consequence wrong? No — not only is it not wrong, it is heavily needed, especially here in Iowa.

Only 3.1 percent of students at the University of Iowa are black, according to the UI Undergraduate Admissions. A lot of those students come from Chicago, making that transition to Iowa a real game-changer for them. I don’t even live in Chicago, and it was hard for me to adjust to the overwhelmingly large white-to-black ratio.

Being thrust into a situation like that is almost heartbreaking, because as silly as it sounds, not seeing someone like you can make the campus seem even more foreign. It’s hard to feel the university is your new home or that “you are welcome here” when you constantly feel like an outsider.

Not only that, but being in a white-majority area comes with a cost. In order to be seen as professional, there is almost a constant need to conform. Code switching, or talking white, is just the tip of the iceberg. A black or brown student in Iowa has to talk white, act white, dress white in order to fit in.

Of course you don’t have to conform, but that’s when you get the stares. The people asking you borderline racist questions, the people who cross to the other side of the street when they see you coming, those who follow you throughout the store to make sure you’re not stealing anything.

Having events where black kids can just be black, where they can relax and be themselves without judgment is extremely needed. An environment like this can be lonely for students of color.

I was hesitant to say that UI needed black-only events, and I found myself trying to compromise. I thought perhaps we could have black-theme events that still encourage everyone of coming. But even in situations such as that, you find problems.

Once I took a friend to Panchero’s. The people behind the counter were black, and I started joking with them. After leaving with our food, my friend looked at me and said, “It’s really cool how you can switch from talking white to talking black like that.”

While he may have thought that was a compliment, to me it was slightly annoying and a little sad that he couldn’t even recognize why black people need to code switch in the first place.

Most white people are not inherently trying to be racist, but Iowa as a whole has a culture that either rejects or glorifies blackness. If we have black-only events it removes those ingrained expectations. It rids black kids of the constant need to fight stereotypes. It frees students to truly be themselves, with no onlookers casting judgment.