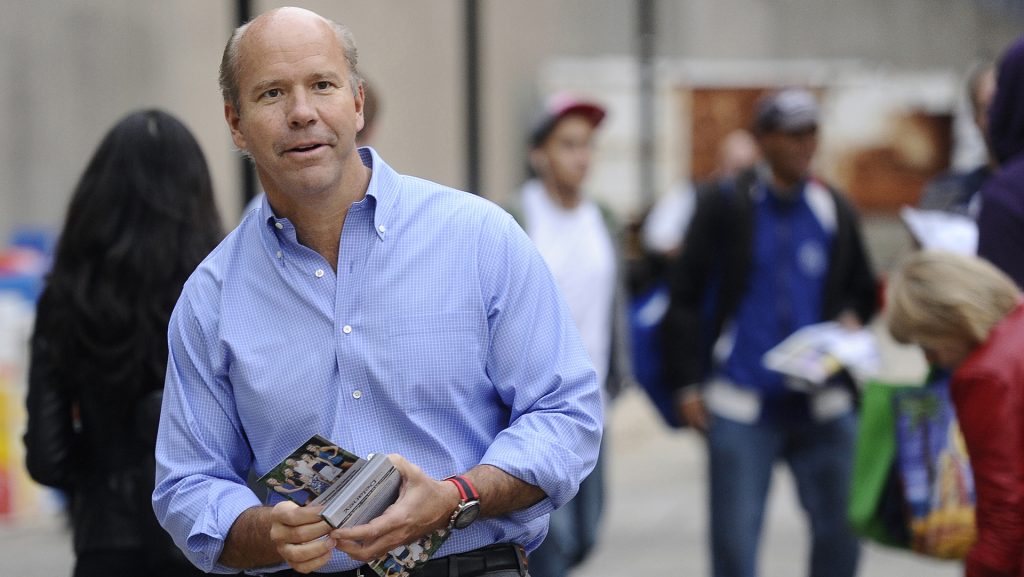 Congressman John Delaney campaigns at the Shady Grove Metro station in a file image from 2014. Delaney is running for president, but polling at zero. (Kim Hairston/Baltimore Sun/TNS)

Before July 28, 2017, Rep. John Delaney, D-Md., was just another congressman from a safe blue district. He’s been a rank-and-file member of the Democratic Party since 2013. But on that day he officially announced his candidacy for his party’s next presidential nomination in 2020.

“There have been moments in history where big ideas have really changed things, and I think I have some big ideas,” Delaney said in an interview after the announcement.

With virtually zero name recognition or major legislative accomplishments, Delaney’s campaign could be written off as media stunt. But the congressman from western Maryland is serious. He’s running ads in Des Moines, Davenport, and Sioux City as if it was the height of caucus season here. So it may be one of the longer shots in recent memory, but Delaney is locked, loaded, and aiming straight at his target.

The first question this series normally asks is “Is he/she going to run?” However, unlike speculation surrounding other possible candidates, we already know the answer to that one. If you thought campaigns in America were too long already, it’s not going to be any different this time around.

But let’s not get too pessimistic. There is a precedent for successful early announcements. In 1960, then-Sen. John F. Kennedy announced his candidacy far earlier than what was normal at the time. He did so with the specific purpose to smooth over public concern about his Catholic faith. While Delaney is a Democrat who happens also to be a Catholic — that’s a joke for the three history buffs who will get the reference — potential anxiety over his religious beliefs seems virtually nonexistent in today’s America.

Delaney’s way-too-early campaign is a nice gimmick to pick up some name recognition. Perhaps this all just a ploy to make a run at the Maryland governorship in 2022 or to become visible in the vice-presidential selection.

Is he going to be nominated?

No, he is not. Whatever his game plan is, he isn’t beating out Democratic stars such as Bernie Sanders, Elizabeth Warren, Joe Biden, and at least a dozen others. If Delaney is even remotely competitive come caucus time, I’m switching from political science to an easy major like nursing or mechanical engineering.

Is he going to beat Trump?

Even if his Catholic faith can divine him a miracle with a nomination, it seems just as impossible that Delaney will defeat the incumbent. As disliked as President Donald Trump may seem to many people, there’s a solid chance he’ll recover in the coming months and years. His primary base is still rock solid, and Republican tax cuts could grow into broad appeal for moderate voters. Ever since the State of the Union Address, the commander-in-chief’s polls have trended upward.

Delaney’s chances to win the White House are microscopic at best, but he does have an interesting message. In his current marketing push, he admits to using a “dirty word” throughout his campaign. That “dirty word,” he says, is “bipartisanship.” Delaney wants to be president to bridge the chasm between Democrats and Republicans as it grows deeper and wider.