Guest Opinion: Iowa’s disinvestment in higher education is a disservice to future generations 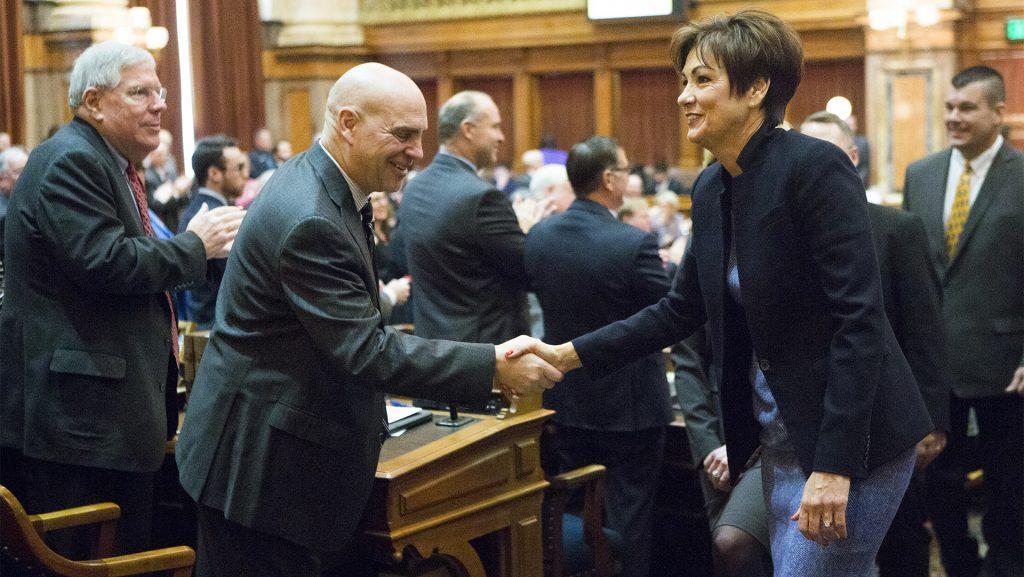 Iowa Gov. Kim Reynolds shakes hands with after Rep. Dave Jacoby, D-Coralville, while Sen. Robert E. Dvorsky, D-Coralville, claps after her first Condition of the State address in the Iowa State Capitol in Des Moines on Tuesday, Jan. 9, 2018. Reynolds took over the governor office in May of 2017. (Joseph Cress/The Daily Iowan)

As a first-generation college student from northwest Iowa coming to the University of Iowa in 1983, I remember the excitement, some fear of the unknown, and endless opportunities that lay in front of me. I also remember my grandparents and parents so proud that the first in the family was going to college. They would say, “Education and a college degree; that’s something no one will ever be able to take away from you.”

Fast forward 35 years since then, and my wife and I are now parents of one student who has graduated from UI and another in her sophomore year. We’re lifelong Iowans, so proud of the public-education tradition in Iowa — K-12, community colleges, and our regent universities. We chose to raise our family in Iowa, to a large extent, because of the values of strong support for public education.

This is also my 26th year as a UI employee, serving over the years in a variety of roles in the Office of Admissions and Enrollment Management. I’ve had the fortune to meet with students and families across Iowa and the nation who value what UI can offer them personally, our state, and the nation.

RELATED: Guest Opinion: Support higher education for a bright future for all

This year, I serve as president of the UI Staff Council, representing approximately 7,500 non-bargaining Professional and Scientific staff members. These dedicated individuals support student success in a variety of ways, both directly and indirectly: working in research labs bringing new discoveries to light and often mentoring students along the way; ensuring the institution maintains its fiduciary responsibilities to our students, tax-payers, donors, and the state and federal governments; recruiting, hiring and training the very best staff to meet the goals of the institution; helping patients, their family members and even other staff as they deal with life-threatening illness; and reaching out to school children, entrepreneurs, executives, local government leaders, nonprofits, and so many others to assist them with the expertise and creative spirit available here.

That’s why, as a proud UI alumnus, parent, employee, taxpayer, community volunteer, and representative of UI staff, I’m disheartened watching some in the Iowa Legislature work to dismantle the very public-education institutions I and so many of my UI colleagues, students, their parents, and fellow Iowans have come to count on and cherish. For you see, there has been a generational disinvestment over the past 20 years in UI and its sister regent universities, and it only seems to be picking-up steam this year as the Legislature looks to cut millions of dollars midyear from our budgets.

In the last 20 years, the state budget has grown by nearly $3 billion, but funding for the university has actually declined. In fiscal 2018, the UI received $7 million less than in 1998 despite enrolling nearly 5,000 additional students. During those two decades, the Consumer Price Index increased 53 percent and the price of a gallon of gas increased more than 85 percent. As staff, we have been asked to do more with less. We have worked sided-by-side with university administration to find efficiencies and cost savings (TIER) to the point that by fiscal 2022, UI will have funded about one-third ($58.5 million) of the UI Strategic Plan through TIER and incremental cost savings.

So, as my youngest daughter has a wonderful experience this year working in a medical research lab, playing in the Hawkeye Marching Band, and engaging in the classroom with some amazing faculty and peers, let’s hope her dreams of going on to professional medical education, serving others, and engaging as an active and productive Iowa citizen aren’t squashed by the ongoing disinvestment in our public higher-education institutions. Not only for her sake but for generations to come.

As the UI seeks funding from the state Legislature for its fiscal 2019 appropriations request and faces the possibility of more midyear budget cuts, the DI will publish informational pieces and pieces from UI community leaders highlighting the value of higher education and calling for advocacy. Continue checking dailyiowan.com as Iowa’s universities face this critical issue.