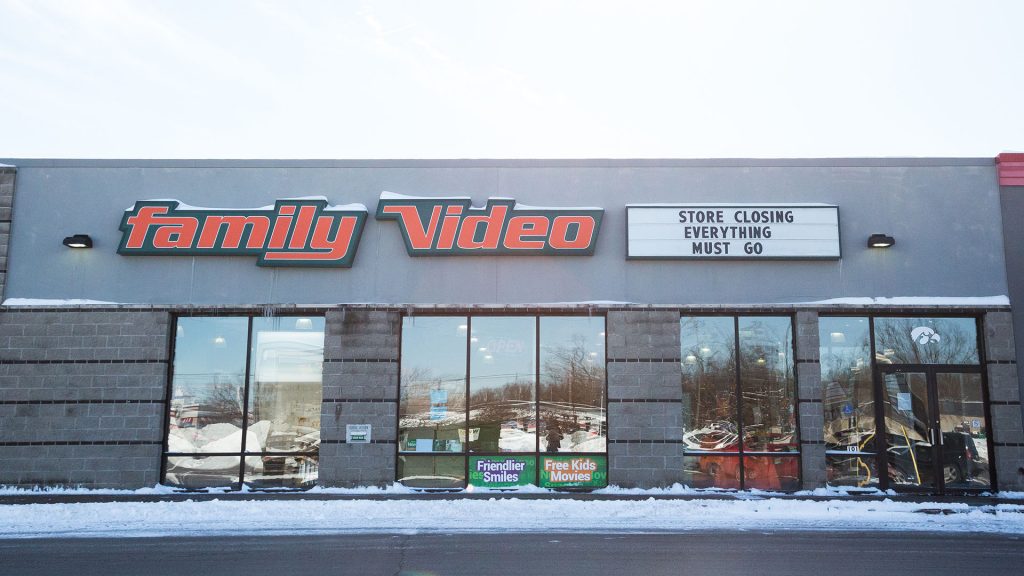 The establishment, 101 Highway 1 W., shut the doors because its lease expired. After store officials announced it would close, Family Video held a sale on all of its movies and video games, and a sign displayed in the front door said, “Everything Must Go.”

Inside the nearly vacant building, the once-filled shelves were bordering on empty because of purchases from the previous week. Films were available for as little as $1.

Hilary Tasma, the manager of the North Liberty Family Video, said it was upsetting to see the store go.

“Obviously, we want to keep growing or expanding the business,” Tasma said. “I do know we’ll start getting some traffic from Iowa City.”

Former employee Jamie Swanson, who had worked in the Iowa City store for nearly two years, was taken aback by the closing.

“I was actually pretty surprised,” she said. “I knew it’s not for lack for business, more for the lease being up.”

“Family Video still has a decent customer base,” Swanson said. “If you’re looking for older movies, it might be the place to go.”

There has been a steady decline in video-rental stores in the United States, with Blockbuster filing for bankruptcy in 2010. In the face of a bleak environment, Family Video has remained the only video-rental chain maintaining a profit.

Nonetheless, video-rental stores face dips in sales. In 2017, the trade organization Digital Entertainment Group reported that revenue from sales and rental of movies has dwindled since streaming has become more common, with income dropping 7 percent since the previous year.

University of Nevada-Las Vegas Assistant Professor Benjamin Burroughs, who received a Ph.D. in communication studies at the University of Iowa and wrote his dissertation on streaming media, said there were some benefits to the business model. This, even with the competition from streaming services closing many video stores.

“Stores like Blockbuster were good at controlling how and when audiences would consume movies, which created a schedule for entertainment and production companies,” Burroughs wrote in an email to The Daily Iowan. “Movies were released in theaters, came to DVD and rentals, and then could be bought by consumers. Television shows would air on TV in full seasons and then migrate to DVDs and rentals. This scheduling of content maintained these windows for profit.”

However, Burroughs said, there are some drawbacks to the video-store services.

“Blockbuster and video-rental companies had their own forms of problematic restrictions from late fees to creating scarcity with specific numbers of rentals among other things,” he said. “Streaming media do come with the price of subscriptions, but they expand the range of choices for televisual content. Streaming also dislodges content from that physical hard copy to allow for mobile content. You can stream from a variety of devices that are not centered on consumption in the home.”