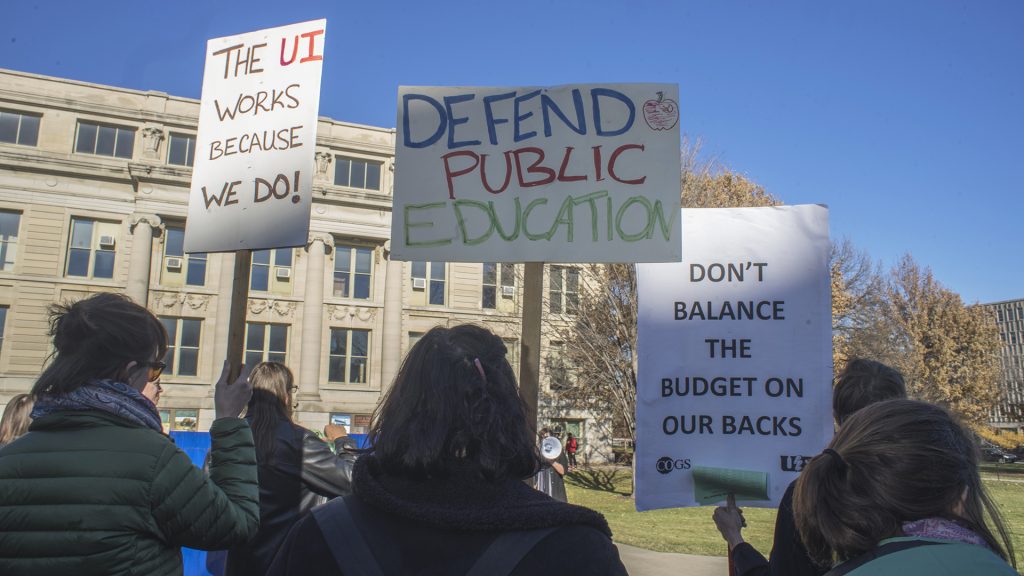 Members of the UI community hold signs in protest on the Pentacrest on Wednesday, Nov. 29, 2017.

The Daily Iowan Editorial Board calls on the Legislature to reflect on how strong state universities signify a strong Iowa.

As the Iowa Legislature grapples with yet another state budget shortfall, it is yet again using Iowa’s public universities as a scapegoat to cut funding.

In fiscal 2000, Iowa spent $556.7 million funding state universities. By fiscal 2017, that number was slashed by more than $30 million. The Legislature’s latest proposal, which just passed through the Senate, would reduce the fiscal 2018 budget by $14.6 million for state universities — nearly half of the drop in funding over almost 20 years.

What public universities mean to our state 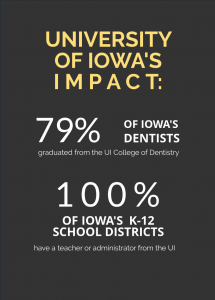 Here at the UI, it’s evident the presence of students and alumni is palpable throughout the state. Seventy-nine percent of the state’s dentists graduated from the UI College of Dentistry, providing an estimated $800 million in dental care to Iowa’s citizens. One hundred percent of Iowa’s K-12 school districts have UI alumni as teachers or administrators. And the College of Education is involved in numerous state outreach projects, including the Center for Disability Research and Education and Invent IOWA.

The UI has been a pioneer for advances in social equality and research since it was founded two months after Iowa was admitted to the union.  The UI was the first state university in the U.S. to admit men and women on an equal basis. The first coeducational medical school opened its doors here in 1870. In 1940, the UI awarded the first Master of Fine Arts degrees in the U.S. And here at the DI, we had our own first when Mildred Whitcomb became the first woman to lead an American college daily newspaper.

Today, the UI continues to perform groundbreaking research and give back to the community. The UI Dance Marathon has raised millions of dollars for pediatric cancer research. Four UI Cultural and Resource centers provide students a home away from home and reflect the diversity of our school that has strengthened it since its conception.

Proposed budget cuts are also set to hit our state’s justice system and human services, with county courthouses potentially closing. Interestingly enough, the state budget continues to come up short despite Iowa revenues rising. And yet, the Legislature sends a message with cuts to higher education and other programs benefiting Iowans that there is simply no other way. In a highly controversial move earlier this year, Gov. Kim Reynolds evaded a special legislative session and transferred $13 million from the state’s emergency economic fund.

Based on these odd juxtapositions, it’s more than fair for Iowans to question whether the Legislature is balancing the state budget responsibly. In all of this chaos, corporate businesses seem to have come out clean. If Iowa’s budget situation is really so dire, perhaps the Legislature should consider cutting corporate tax credits in lieu of sacrificing education and vital services.

Driving away nonresidents and international students comes at a cost

The Legislature must reflect on the less-immediate costs of cutting higher education funding, most notably in regard to nonresident and international students, who are often left out of these conversations. Nonresidents make up 45.5 percent of the student population. Not only do they pay more than in-state students, supporting progress in our universities, they also provide an invaluable diversity of perspective. The UI is among a troubling national drop in foreign students studying at American universities, and what this could mean for our schools is not to be taken lightly. More funding cuts will likely precipitate tuition raises, program eliminations, or both — the possibility of these detractors for enrollment are not something we should gamble with.

College education must be accessible

Ultimately, an education at one of our state’s regent universities should be as accessible as possible — especially for first-generation and minority students. First-generation students composed almost a quarter of UI’s first year students in the fall of 2017. We should want to see this percentage rise, not fall because of raising tuition, especially when there continues to be a disparity in retention rates among underrepresented students.

A public higher education represents opportunity and growth for the individual and our state. The Legislature must make it clear, especially in times of budgetary crisis, that an investment in our state’s future is priceless.

As the UI seeks funding from the state Legislature for its fiscal 2019 appropriations request and faces the possibility of more midyear budget cuts, the DI will publish informational pieces and pieces from UI community leaders highlighting the value of higher education and calling for advocacy. Continue checking dailyiowan.com as Iowa’s universities face this critical issue.