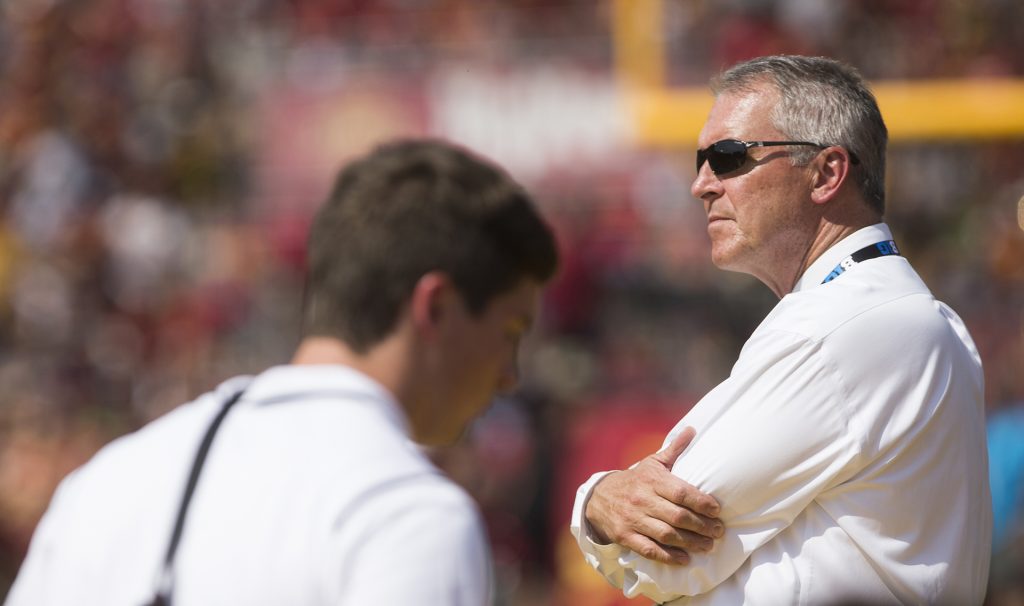 Iowa Athletics Director Gary Barta watches on during the Iowa/Iowa State game for the Cy-Hawk trophy in Jack Trice Stadium on Saturday, Sept. 9, 2017. The Hawkeyes defeated the Cyclones, 44-41, in overtime.(Joseph Cress/The Daily Iowan)

The University of Iowa is working with the federal Office of Civil Rights to demonstrate it gives equal opportunities to both female and male athletes.

After a lengthy investigation into complaints of discrimination against women in UI sports, the university signed a Voluntary Resolution Agreement on Dec. 29, 2017, to “voluntarily resolve the gender equity investigation,” according to the agreement document. The complaint against the university was filed on Sept. 2, 2015.

The Civil Rights Office of the Department of Education investigated the university for two years before coming to the decision, laid out in a 32-page report, that there is insufficient evidence to find Title IX violations in six of the 13 areas studied.

“[The Civil Rights Office] found insufficient evidence of a violation in six component areas: scheduling of games and practice times, travel and per diem, coaching, medical and training, publicity, and support services,” the agency said in its report.

The seven other categories required more data, keeping the agency from making an official judgment on whether the UI violates Title IX. These categories include equipment and supplies, recruitment, locker rooms, and practice and competitive facilities.

As part of the voluntary agreement, the UI has to either show that there are no disparities between the genders, or if there is, it must give an explanation that the difference doesn’t involve gender discrimination.

“The university pledges to assess its compliance and resolve any deficiencies identified as a result of its assessments in the following areas,” the UI said in a statement.

The assessments must be completed by April 30.

On Jan. 29 the university provided information in a document sent to the agency on two of the categories in question: accommodation of athletics interests and abilities and athletics financial assistance.

“No NCAA team would be viable with only six student-athletes,” UI said in the document.

The UI showed comparable athletics financial assistance by comparing the participation rates in athletics of men and women and the amount of financial aid given to female and male athletes. The resulting difference is less than 1 percent, which is what the agency required.

Despite having to further assess more than half of the categories surveyed, the university emphasized the investigation is over and Title IX has not been violated.

“The [Civil Rights Office] found no violation of any regulation under Title IX,” UI said in the statement. “The resolution concludes the [agency]’s investigation and was effective Jan. 10, 2018. The university has agreed to provide additional reporting through the spring to substantiate its continued compliance under Title IX.”

Depending on how the UI proceeds, this might not be true. If the university doesn’t send the data allowing the agency to determine compliance with the Voluntary Resolution Agreement and Title IX, then the office can take action against the school.

Those who filed the report have been kept anonymous. Another complaint by four former field-hockey players was filed in January 2015, but the university hasn’t heard back from the agency after reaching out about it, said Jeneane Beck of the UI Office of Strategic Communication.

Many have connected the complaint to the lawsuit that found the UI guilty of gender discrimination when former field-hockey coach Tracey Griesbaum was fired, but Beck emphasized these is no connection legally.

“They are totally separate … but I do think people conflate them,” she said.

Editor’s note: A previous version of this article stated “Another complaint by four former field-hockey players was filed in January 2015, but nothing came of it, said Jeanene Beck of the UI Office of Strategic Communication.

Many have connected the complaint to the lawsuit that found the UI guilty of gender discrimination when former field-hockey coach Tracey Griesbaum was fired, but Beck emphasized these is no connection.”