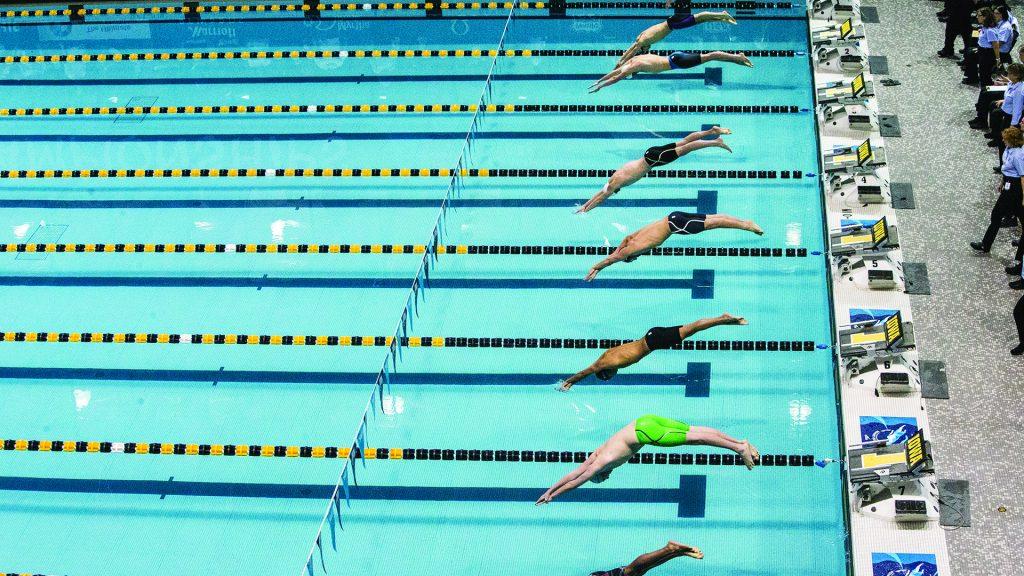 The Men's 200m IM compete for the third heat during the second day of USA Swimming Junior Nationals at the Campus Recreation and Wellness Center on Thursday, Dec. 7, 2017.

The Iowa swimming and diving team will take to its home pool today in the last regular-season meet before the highly anticipated championship season begins.

The competition against Western Illinois will begin at 6 p.m. in a rare sprint-meet that will feature tower diving in the Campus Recreation & Wellness Center.

The 10-meter dive doesn’t occur often during the dual season, and this meet gives those divers a chance to work on their skills before the Big Ten Championship.

“It’s of great value, and it’s of great value because, as you know, on tower over the season, we don’t have a whole lot of opportunities to compete up there,” diving coach Todd Waikel said. “So this is one more time they can get up in front of judges, and do a tower, and kind of get those nerves out and so-forth for the big meet.”

Not only for the tower divers but for the entire team, this regular-season nonconference meet will serve as a final sharpening for the athletes to prepare for championship season.

The focus now is on the technical details, such as starts and turnarounds, that can make a big difference, even though it might just be a one- to two-second difference.

“This meet is a fun meet, because it’s a sprint meet, so we get a chance to see some things as a final tune-up heading into the conference meet,” head coach Marc Long said.

RELATED: Hawks chip away for success

In dual meets, the Iowa men are 4-1 with an undefeated Big Ten record. The women are 4-4.

In last season’s matchup with the Leathernecks, the Hawkeyes swept the meet, with the men winning, 145-58, and the women winning, 161-49. This will be the seventh year in a row that the two teams will face off.

Competing at home has its advantages for the last meet. The way the pool is set up, it brings a challenge.

For the divers, they’re prepared to compete in any pool. However, the plus side of being in their home pool is familiarity.

“I think it’s important for some other reasons, not really competitive reasons,” Waikel said. “It’s great that we’re home and that parents are going to come out and watch, and that usually leaves you with a really good feeling. I feel like the divers are ready to compete anywhere. It’s nice that it’s here, but they’ll go anywhere.”

The Hawkeyes are familiar with their home natatorium. However, for the opponents, it can take a little bit of adjusting.

“Anytime we have a meet here, it’s awesome, it’s really special,” sophomore Joe Myhre said. “It’s a hard pool to compete in and to try to win in for the visiting teams. We’re just looking forward to having some fun.”

Following the dual, Iowa has a week off from competition to train for the Big Ten meet. The women will start off the championship season on Feb. 14-17 in Columbus, Ohio. The men will follow one week later, from Feb. 21-24 in Minneapolis.