Trying to break out of racism 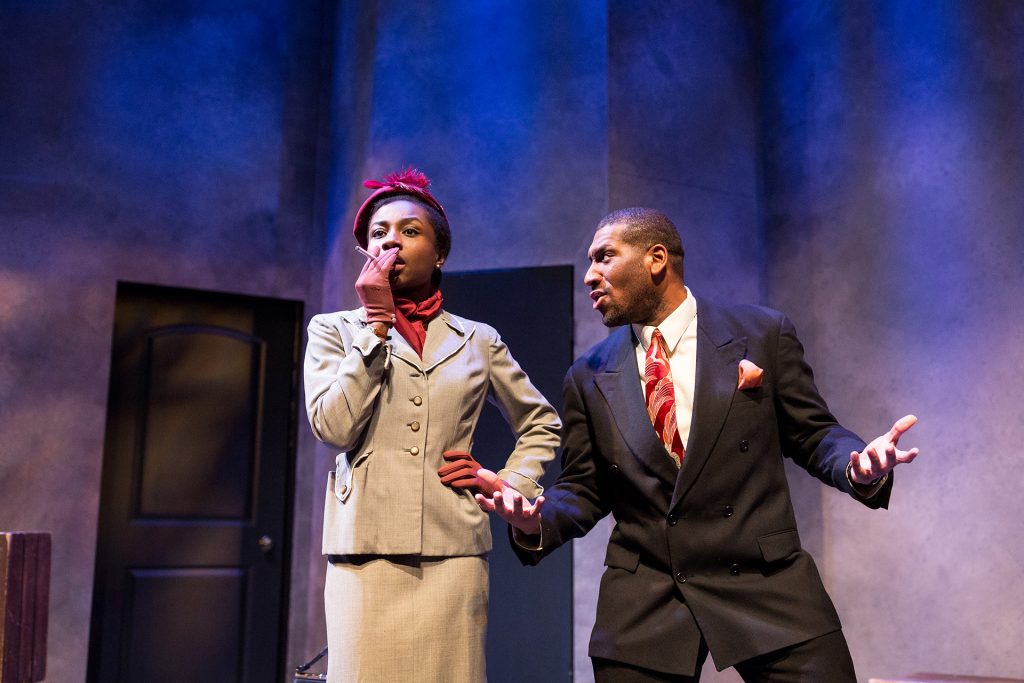 Emelia Asiedu and Randryck Lewis (L–R) perform in the play “By the Way, Meet Vera Stark” at the University of Iowa Theater Building on Tuesday, Jan. 30, 2018. (David Harmantas/The Daily Iowan)

Over the span of 70 years, a once-budding actress experiences the movie business shifting its outlook on marginalized groups and discovering, or ignoring, what it still needs to improve upon.

The University of Iowa Theater Department will present its first Mainstage show of the semester, By the Way, Meet Vera Stark, which poses the question, what does it mean to compromise one’s personal values in order to become a successful star?

Vera Stark is an ambitious black woman living in the early 20th century, determined to break out of her role as a maid and follow her dreams of becoming a famous actress. On her journey, Stark becomes intertwined with Gloria Mitchell, a white woman working in Hollywood, in a film project. Their relationship directs them through the complex dynamics of Hollywood and the industry’s view of African Americans.

Director Tlaloc Rivas has a long history with the play — he directed the first stage reading in New York in 2009. Rivas cited himself as a longtime fan of the playwright, Lynn Nottage.

“I’m attracted to plays that have something to say about the world in some way, and that is an examination and reflection about the complex relationships between race and Hollywood,” Rivas said. “Certainly, the conversations are happening now with #OscarsSoWhite and the #MeToo movement.”

The play has three distinct tones throughout the three acts, with the first operating like an exaggerated screwball comedy, the second act taking place on a talk show in the ’70s, and the third act set in a discussion panel during the early 2000s.

Compared with more contemporary pieces, Rivas found it difficult to work with the comedy in the script, because the show has an old-fashioned approach to its jokes.

“The comedy was really hard because of the timing,” Rivas said. “The screwball comedies of the ’30s and ’40s were really dynamic. They were so full of dialogue, and it has that quality of being very fast and dense.”

Randryck Lewis, an M.F.A. candidate in acting, plays the characters of Leroy Barksdale and Her Forrester. He was enraptured and thrilled to perform in a show that was simultaneously relevant and different.

UI alumna Miriam Randolph, who plays Anna Mae Simpkins and Carmen Levy-Green, said the play spoke to her with its theme of discrimination in the entertainment industry.

“The main issue I think we’re talking about is African-American actresses and how they struggled to get a role that defines them in other ways besides being a mammie or a slave, so there is an urgency of them wanting to be something more than that, and I think that is very true today,” Randolph said.

“Although the archetypes have changed, it’s not necessarily missy and mammie, it’s still the outspoken best friend or the sassy girl, or the angry black guy, so it’s most definitely still relevant,” he said.

In the show, the actors needed to keep their mannerisms in mind while they were working off certain characters.

“When you’re around the other black characters and actors, your physicality, your vocal variety is much different,” Lewis said. “That changes the instant a white character enters a scene. That’s kind of just a thing of the time. You change your demeanor and you have to co-shift, kind of maneuvering into a white world essentially, because you didn’t want to be thought of as dumb or not having any home training.”

While sharing a heavy story, the cast pulls through with their on-stage chemistry.

“The most fun is just working with so many talented actors who care just as equally about the sharing of the story, making sure the story is not contaminated with our own personal perspectives,” Lewis said. “We have very responsible actors who made the process extremely flowing and fun.”

He expects the audience will be thoroughly engaged.

“You’ll feel a part of the world,” he said. “We don’t exclude the audience when the world shows, which I think is just fabulous with the topic at hand.”