CHOMP chows down on Iowa City 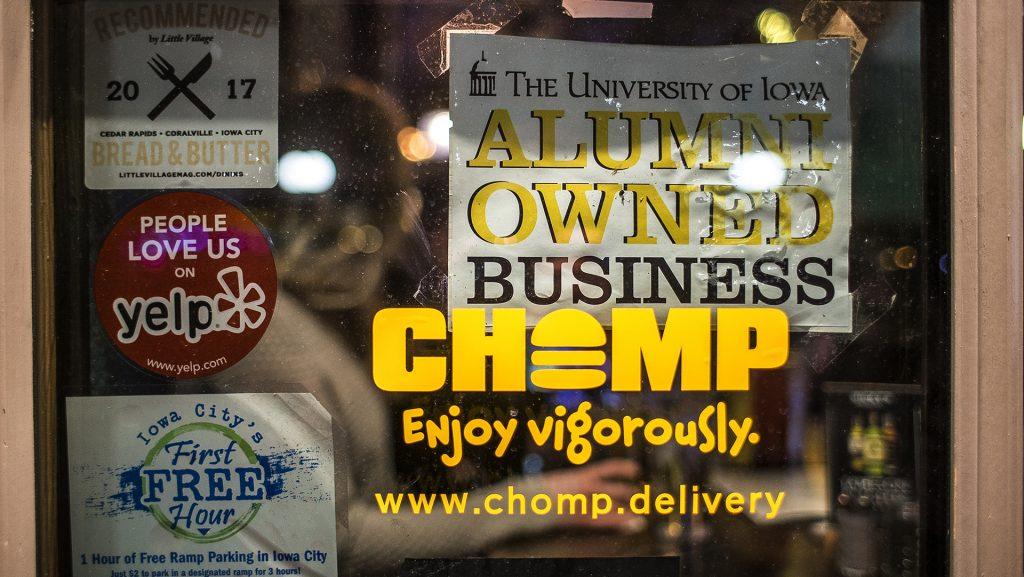 A CHOMP sticker is prominently displayed on the window of Mickey's Pub on Monday, Jan. 29, 2018.

Despite being relatively new, a local food-delivery service has carved out a piece of the Iowa City market.

CHOMP, a food-delivery service similar to OrderUp and GrubHub, has expanded greatly since starting this past fall. Twenty local restaurants founded the service, and now, around 70 use it.

Owner of DP Dough and founder of CHOMP Jon Sewell said the number of orders per day has skyrocketed since delivery began in late October. The business went from having 20 orders a day to 300.

Sewell said CHOMP’s being a local business is a big draw for restaurants; GrubHub did away with local offices when it bought OrderUp.

“More than half of our restaurants are only found on CHOMP; that’s the only place you’re going to get delivery,” he said. “Anything GrubHub’s got, we’ve got, too … We’ve seen a big movement away from GrubHub.”

Mesa Pizza is one such business that made the switch.

Employee Matt Ventling said being able to speak to CHOMP’s people right away instead of waiting on hold is a plus, and the fees being lower allows the restaurant to make more off of the deliveries.

“We don’t have a lot of problems that we had with OrderUp … you can actually talk to people,” he said. “If we need to, we can reach out to the CHOMP people and hear back from them, which is a nice change.”

Sewell said customers can reach help right away if something is wrong, creating a more personal relationship between the business and customer, and that makes them want to keep coming back.

“If you look at some of the reviews for us, some of the best reviews we get in many cases are from customers who had a complaint, and we resolved the complaint so fast and got them what they wanted … we just made it right,” he said. “We had real people talking to them, then they turned around and gave us five-star reviews.”

Currently, CHOMP is trying to reach a population that, surprisingly, hasn’t been very responsive: students. Year-round residents have been the service’s main customers so far, which Sewell said is the result of local businesses’ appreciation.

UI student Emily Lohman has embraced CHOMP and used it to order DP Dough during its promotional week in which free delivery was offered with a code. She has used OrderUp in the past, and she finds the service comparable, but CHOMP offers better delivery fees, she said.

“It was really good … and it was plenty fast,” she said.

Once CHOMP is more established in this part of Iowa City, Sewell said, the business might look at expanding to other markets, both in Iowa City and such towns as Ames and Cedar Falls. Before that, he said, he would like to see the number of orders increase to 500 or 600. He expects that to happen quickly.

“For now, we’re just trying to make Iowa City happen …” he said. “We’ve grown very quickly, and we’re still trying to come to grips with that. Then we’ll decide where else to go.”