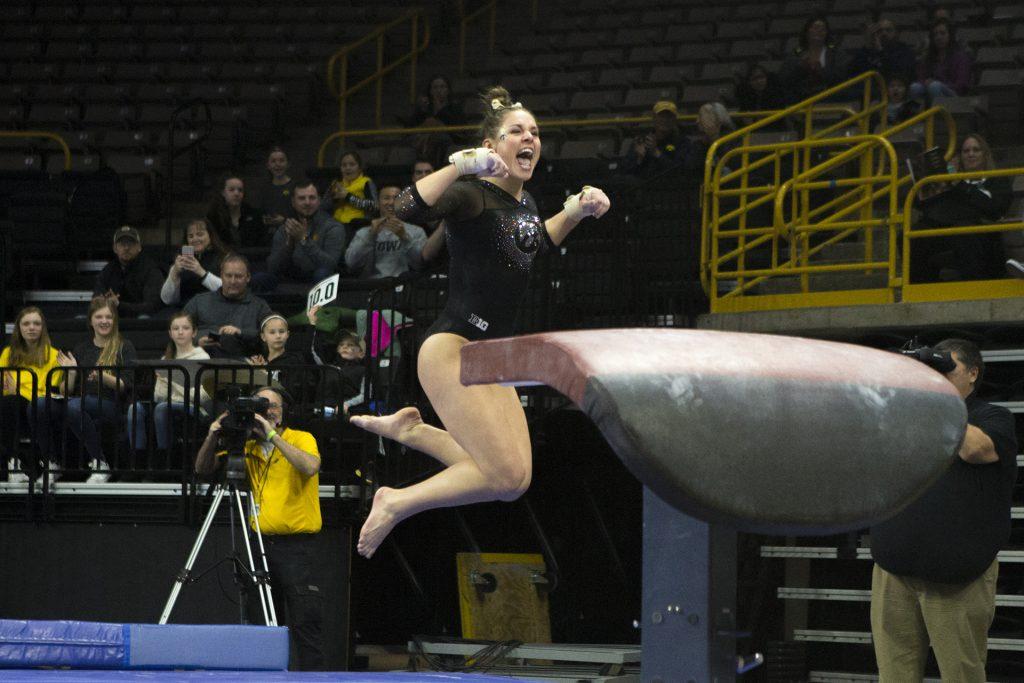 The Iowa women’s gymnastics squad will be back in Big Ten action today as the team travels to take on Maryland at 5 p.m.

The GymHawks are 2-0 in conference competition after beating Michigan State on Jan.13 and Ohio State on Jan. 19.

It’s been a relatively short conference season, but the GymHawks think they know why they’re undefeated.

“The past two meets have helped us focus more on ourselves,” senior Melissa Zurawski said. “That’s something that we’ve been working really hard on, and I think if we just continue to do that, then we’re going to be even better than we have been.”

Against Ohio State, the success could be attributed to how the team carried itself throughout the entire meet.

“They presented a courageous, competent, confident team and then it shows up in the gymnastics,” head coach Larissa Libby said.

That confidence comes from the way the GymHawks perform with each other.

In each event, every athlete is cheering each other on, and the success flows from one person to the next.

“We thrive a lot on energy, and for example, if someone sticks, then it seems like we all stick after that,” Zurawski said. “It’s really exciting because we have a lot of energy and are confident after the meet that we’re going to carry it onto the next meet, and basically just carry ourselves, and compete how we do in practice.”

That carry-over of confidence was also a key in the Ohio State meet.

“Definitely, when you had that first person hit, it just carried all the way through,” Libby said. “I think they fed off of each other a little bit.”

Facing Maryland will look a little different from previous meets for Iowa.

Kaji is one of six Hawkeyes who are ranked nationally in events. She sits at No. 79 on beam with a 9.808.

Despite the necessary lineup changes, the team isn’t any less prepared for Maryland.