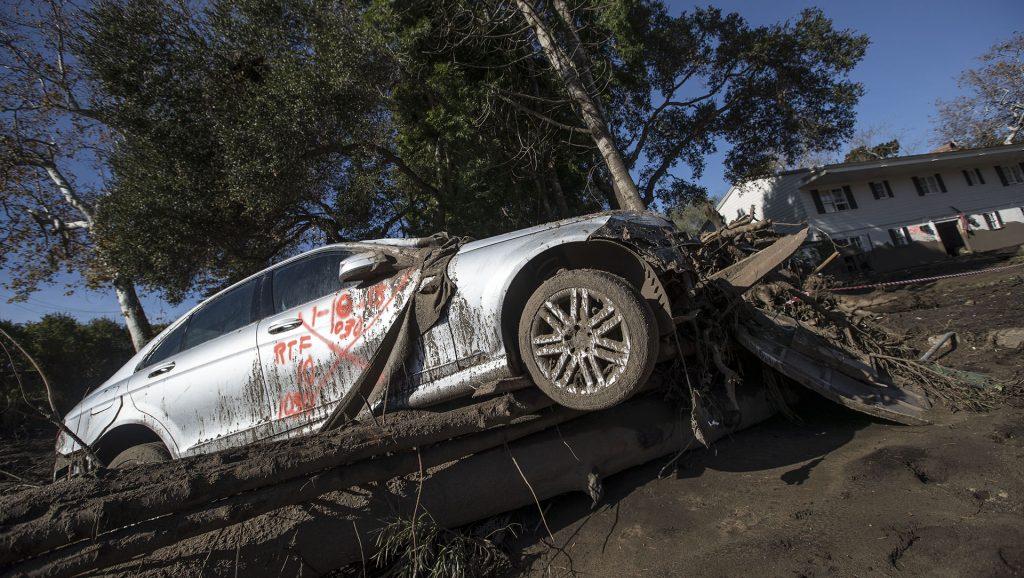 A car atop trees and debris in the rubble of a home in the aftermath of mudslides in the 300 block of Hot Springs Rd.in Montecito, Calif., on Jan. 12, 2018. (Brian van der Brug/Los Angeles Times/TNS)

New tools to predict disastrous weather may be here in the near future.

A University of Iowa study suggests that mudslides, such as the recent one in Southern California, might be predictable.

The study, published by UI research assistant Wei Zhang and Associate Professor Gabriele Villarini, outlines the role of the jet stream and atmospheric rivers in predicting heavy rainfall and snowfall in the Western U.S.

“Atmospheric rivers are characterized by long plumes of water vapor — 250 to 375 miles wide on average — that travel across the sky like rivers,” a press release from IIHR said. “[They] move as weather patterns develop and change, and they are present somewhere on Earth at any given moment.”

Villarini, also the interim director of IIHR, said weather patterns interact in a number of ways.

“In the Western United States, atmospheric rivers interact with the mountains that are along the coast, leading to heavy snowfall and rainfall,” he said.

The focus of the study, he said, is to identify major climate modes, such as El Niño, that are responsible for the events. In doing so, he said, communities in these areas can be better prepared to face them.

“Although there have been a lot of studies centered on the East Asian Jet, there is no study that focuses on its link with atmospheric rivers, [and that is exactly] what we have done here,” said Zhang, the lead author of the study and an assistant research scientist at IIHR.

According to an IIHR press release, such climate conditions produce moisture and water temperature fluctuations, as well as strong winds and waves that steer atmospheric rivers toward California, Oregon, and Washington, where a majority of these types of storm usually hit.

“If we know what the causes of these events are, we can be better prepared to predict what their impacts may look like,” Villarini said.

So, he said, the tools will be invaluable.

“Now, by understanding what leads to the storms, we will be better positioned to predict what the atmospheric river activity will look like in the future,” Villarini said.

The study also identified three main clusters, each with different driving factors, that lead to landfall in different areas.

“Atmospheric rivers have received a lot of attention in recent years, and a lot for work that has been done trying to understand them in detail and identify some of the dominant climate modes responsible for the events,” he said. “Because these storms play a very important role for the water resources in the Western United States, it is important to improve our understanding of the physical processes responsible for them.”

By having a better understanding of the physical processes leading to the occurrences of such events, researchers are better positioned to see what atmospheric river activity will look like in the future, Vellarini said.