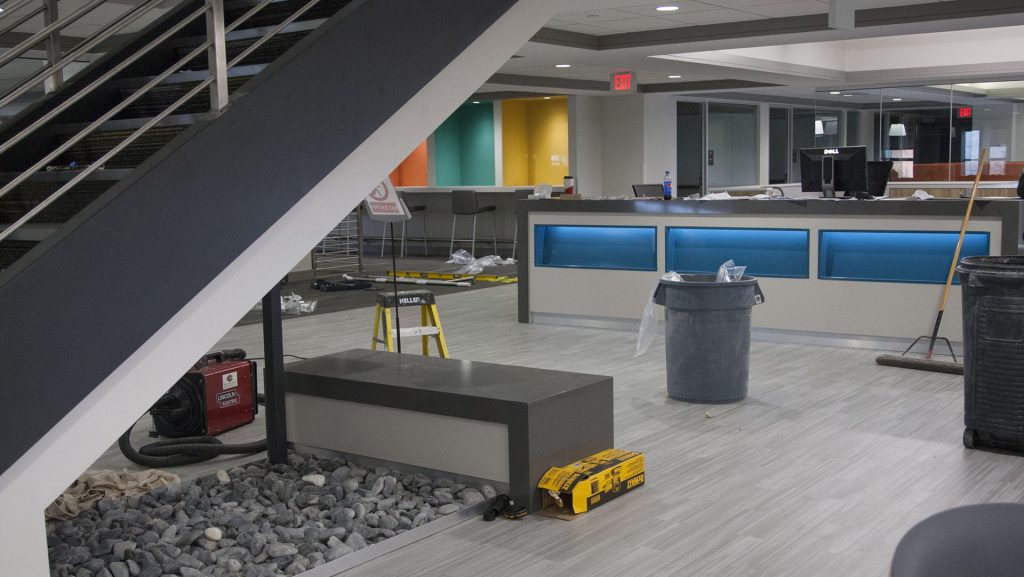 Construction finishes at the new library on the third floor of the Tippie College of Business. The new third floor library, set to open in two days, will feature many groups study spaces and a new cafe area for students. (Katie Goodale/The Daily Iowan)

Slated to open its doors later this week, the Pappajohn Business Building is preparing to welcome students and faculty to a renovated third floor.

Named Biz Hub, the reimagined study space was designed with students in mind to be a new and improved working environment.

“Talking with students, there’s a great need for a collaborative space,” Jim Chaffee, an assistant dean for information technology and facilities in the Tippie College of Business said.

While construction on the new Biz Hub started in May, the idea for it came two years ago as part of a number of strategic priorities. The funding for the undertaking came from private donors Henry Tippie and Kevin Gruneich.

“It’s a great space for the students,” Director of Facilities Rick Adrian said. “More than we’ve had before.”

While a large project on its own, Biz Hub is only one part of a wider master plan for the business building. Chaffee said the college is looking into improving the fourth-floor library at some point.

He said the design of the Biz Hub took pointers from a variety of places around campus, especially the Main Library and newer building designs. The project is a team effort, he noted.

The Biz Hub will have a number of new features for students and faculty, including study spaces for groups of two to 12. The spaces can be found in the privacy of rooms or out in the open with the rest of the tables and seating. A café run by Housing & Dining has been included.

The layout of Biz Hub closely resembles the first floor of the Main Library, including the café, just on a smaller scale.

Other amenities in Biz Hub include a number of computers in a station, a variety of new soft seating, and an electric fireplace. Biz Hub will also be connected to the computer lab on the floor below.

Remnants of the old third-floor library can be seen throughout the Pappajohn Building, which gave students means of finding in-house study spaces while the Biz Hub was under construction. The original soft seating was repurposed and redistributed around the facility. The old carpeting now sits on the first floor to provide a comfortable space for studying.

Chaffee said the transplants have helped keep students around to study while renovations go on.

UI student Jake Hutcherson, who has all of his classes in the Pappajohn, said he primarily uses the Main Library for studying.

Chaffee and Adrian said there are some uncertainties that come with the big change in study environment. They said they saw the possibility of students using the Biz Hub in ways they had not thought of.