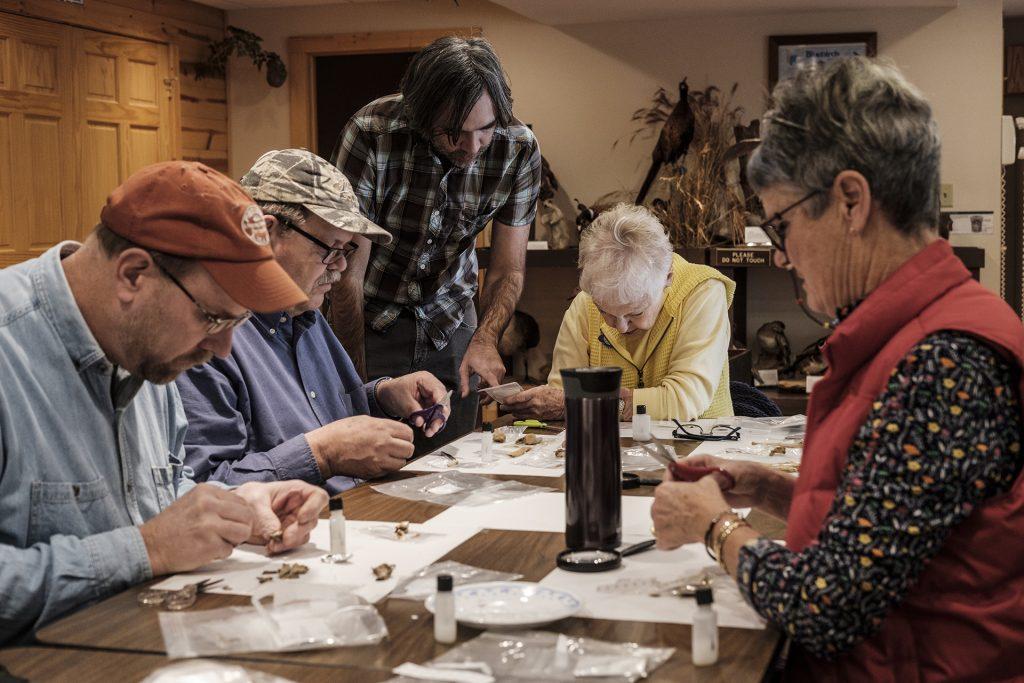 Some Iowans had the opportunity to get their hands on history investigating and labeling prehistoric artifacts on Jan. 19.

Volunteers had the chance to assist an archaeologist and interact with prehistoric bones during Eby’s Mill Artifact Work Day, in which members of the public labeled artifacts from a cave restoration and excavation in the Eby’s Mill Wildlife Area.

The Office of the State Archaeologist at the University of Iowa and the Jones County Conservation Board conducted the restorative excavation of the cave in 2013. The excavation was restorative because the cave had been looted several decades ago prior to any archaeologists investigating the site.

Jones County naturalist Michele Olson said archaeologists uncovered around 30,000 artifacts in the cave during the last excavation. The majority of the artifacts were animal bones and pottery.

“The quantity was way beyond what we imagined,” she said.

Now, all the artifacts must be properly labeled, identified, and organized. Olson said afterwards that the artifacts will be kept in archives so they can be studied in the future.

To assist with the massive undertaking, volunteers gathered at the Central Park Nature Center in Jones County to carefully cut out and glue labels and identifying numbers onto each associated artifact.

Nearly all of the artifacts labeled in the morning had been identified as prehistoric. There were a multitude of bones from deer, rats, mice, unknown specimens, and more.

“We earmark artifacts that we know are prehistoric as very important,” said project archaeologist Bryan Kendall, who oversaw the work day.

Some of the bones were marked as modified, which meant that they had been altered in some way, possibly by humans.

Kendall said they will prioritize artifacts such as pottery or burned bones that show human interaction.

Ultimately, he said, archaeologists will use the artifacts to try to better understand how people used the location. Animal bones, for example, can give insight into what people in Iowa were eating hundreds of years ago.

Kendall said that approximately 1,700 years ago in Iowa, people were most likely occupying cave spaces and upland areas in winter. People tended to live in villages in the summer, where they could eat corn and occasionally do some rudimentary farming, he said.

“What’s really interesting is we don’t do a lot of research on caves,” he said. “We don’t get a lot of opportunities to excavate them.”

Many of the volunteers in attendance had an interest in archaeology and enjoyed being able to see the bones spread out in front of them. They were enthusiastic about interacting with the artifacts and assisting the archaeologists.

Retired archaeologist and volunteer Steve Hanken said many archaeological artifacts can give scientists an idea about what people were eating or how the climate has changed in an area. He said the climate of Iowa has changed over many years from pine forests to very dry land to prairie land.

“Our goal is to preserve what we feel is important so more scientific questions can be answered in the future,” Kendall said.