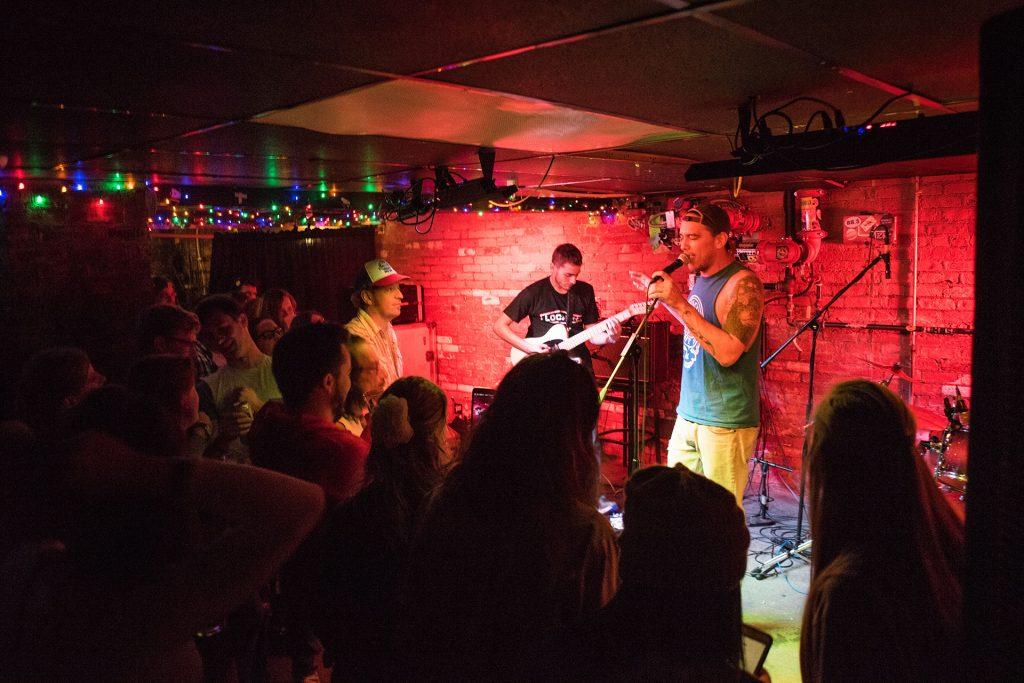 The Daily Iowan; Photos by Matth

On the way downstairs to the “underground” of the Yacht Club, Christmas lights hang on the ceiling and brick walls lined by dimmed sconces seal out the chill of winter. Stickers from radio stations and bands cover the pipes and the doorway like a hard-cover guitar case.

In some ways, being in the Yacht Club is like being in an early ’90s rock music video with Nirvana.

The stone floor and short stage vibrate as the crowd members throw their hands in the air and sway with the booming music overhead.

With red lights from LED color strips as its backdrop, Soul Sherpa took the stage with eight of its 10 members.

“Bringing a band [of that size] anywhere I go, it pops people’s eyes open. That alone … the factor of bringing the element of surprise is incredible,” Soul Sherpa bass player and lead member Ian Draves said.

As Soul Sherpa performed on stage, the jazz and rock incorporated chords and notes with consonance, creating a sound that was harmonically rich and fun to dance with.

Singer Nikkie Lynn sang such songs as “Want you Back,” by The Jackson 5, and “Love on Top,” by Beyoncé, soulfully and beautifully.

Contrarily, Glass Femur, which adds electric guitar solos and undertones to create a combination of jazz and rock fusion, has no vocalist.

Even so, the audience was head-banging with the music and electric guitar solos, which were phenomenal.

Goose Town incorporated more hip-hop influences in its fusion of jazz and funk, enticing the crowd members to clap their hands in the air. Some even took advantage of the back of the basement to do hip-hop dance moves and what was a cross between the moon walk and the chicken dance.

“Being on stage, looking at each other, [and] having that moment of euphoria where everything just clicks,” Snyder said about what she enjoys most about performing with her band.

6 Odd Rats vocalist Joe Blesz walked on stage wearing an Yacht Club muscle tank and began carrying on conversations with the entire audience as if he had known the people in the crowd forever.

“I want people to have fun, [so I] try to make sure people are dancing and enjoying [the performance],” he said. “It’s the worst thing going to a show, and [the band performing] is not having fun, but you can definitely tell we are having fun.”

Blesz sang vocals with a large range, slightly reminiscent to that of Axl Rose.

To supplement the music even more, the 6 Odd Rats occasionally brought a guest member on stage to rap vocals.

Headlining the night, Aaron Kamm & The One Drops performed a wide range of music from dub, blues, and rock to soul and groove.

During this time, the Yacht Club was at its fullest of the night with audience members dancing wildly as they played air guitar and drums.

The Yacht Club 30th Anniversary Party was packed with passion, spontaneity, and exhilaration. The lineup was complete with some of Iowa City’s best bands and musicians.

“All are amazing artists and amazing bands, and they all bring such great crowds,” 6 Odd Rats guitarist Phil Pagano said.