Kumar: Birthright citizenship is not the saving grace for our immigration system 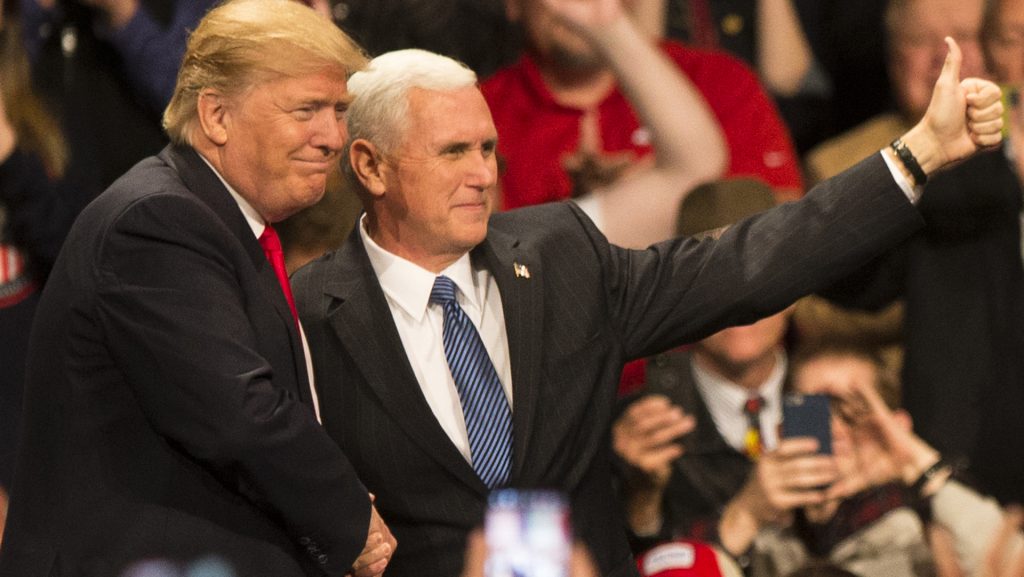 President-Elect Donald J. Trump and Vice President-Elect Mike Pence shake hands during an event in Des Moines on Thursday, Dec. 8, 2016. Trump and Pence are completing a Thank You tour across the country. (The Daily Iowan/Joseph Cress)

When it comes to citizenship, there are two schools of thought: jus sanguinis (right of blood) and jus soli (right of the soil). Right of blood means that anyone with one or both parents who are citizens are automatically granted citizenship. Right of soil gives any person born on the soil of a certain country citizenship by birth. In our nation’s history, birthright citizenship was necessary because of slavery and because we are a nation of immigrants. Now, with a more globalized world and an overly complicated immigration system, people have used birthright citizenship to have “anchor babies.” Although I disagree with the concept of birthright citizenship as a whole, I think it’s important to iterate we are a nation of immigrants. The United States would be nothing without the millions of immigrants that made this country and those who continue to build it.

As an immigrant myself, I am all too familiar with the overly complex system we have. Going through the process, I think it’s ridiculous that millions of my peers get automatic citizenship when they can’t even pass the test or qualify for its prerequisites. The most recent study on this fact was done by Xavier University in 2012, which found that 1-in-3 native-born citizens could not pass the civics portion of the citizenship exam. In comparison, 97.5 percent of foreign-born citizens passed on their first try.

The argument for birthright citizenship today is more focused on native-born babies with illegal parents. I disagree with this practice as well, and many lawmakers have suggested an alternative by combining jus soli and jus sanguinis as an instant fix. However, it is far too late for this policy alone. Once we start making distinctions, we’re isolating millions of families, including those who are here legally but not citizens. Where are we going to draw the line? The logistics of this overhaul would completely ignore families with mixed levels of citizenship, blackballing permanent residents and visa holders as well as people with dual citizenship. Whether we set a date retroactively or a date in the near future, we’re creating an unfair mess to an already messy system.

President Donald Trump has also suggested the Raise Act, which gets rid of “chain immigration” and the lottery system by switching to a merit-based system. This act is quite hypocritical, given the history of the president’s own immigrant family, as well as the first lady’s. Moreover, only 2 percent of our citizens would pass this supposed merit-based test. This fact only solidifies the idea that the president is not putting America first. If he were, he would fund education and social programs, the very institutions that would bring the people of this country up to his par and be able to pass their own hypothetical merit test.

The claims that immigrants are lazy, uneducated, living off welfare, and just out to steal jobs have long ago been debunked. Immediately revoking birthright citizenship or switching to a merit-based system alone will only make our illegal-immigration situation worse. The solution instead is this: Invest in building human capital, simplify the immigration system, and then phase out birthright citizenship. This doesn’t mean lowering security checks or letting those incapable of contributing in, but rather, accepting those who are willing to dedicate their lives to this country to make it better.