The University of Iowa’s largest student organization made a gift commitment to the UI Stead Family Children’s Hospital to fund a position for a faculty member to lead the pediatric cancer research program. 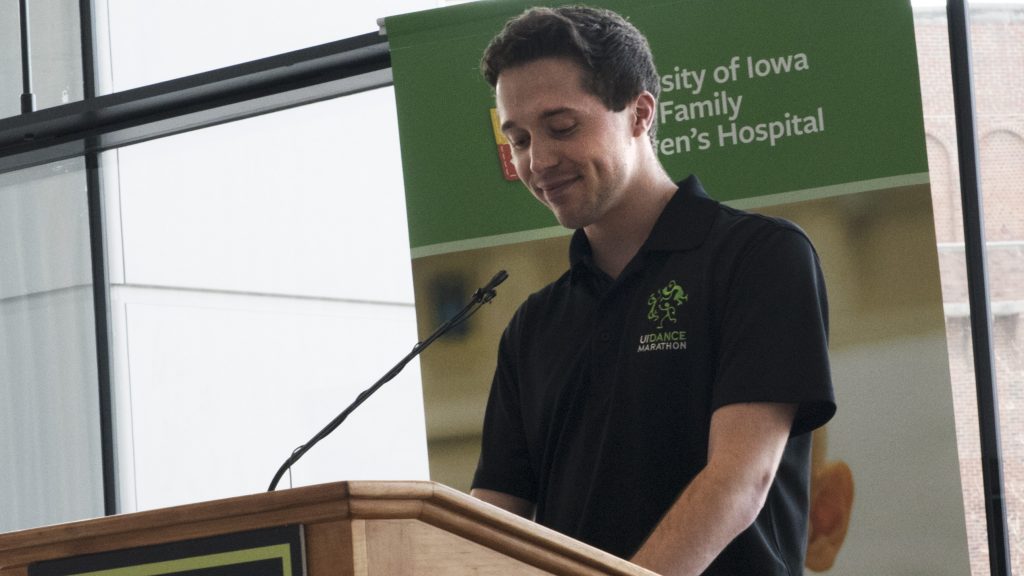 Dance Marathon announced a $2 million gift commitment on Jan. 19 to make strides toward finding a cure for pediatric cancer.

The gift will establish the University of Iowa Dance Marathon Chair in Pediatric Oncology, Clinical, and Translational Research, marking the first student-funded chair in the university’s history. The faculty member will lead the pediatric cancer research program in the UI Pediatrics Department.

Dance Marathon has supported pediatric cancer patients and their families with the money it has raised over the past 24 years. According to the organization’s website, the group has raised more than $21.5 million For the Kids.

With the money Dance Marathon raises, members run projects to provide emotional and financial support for pediatric patients receiving treatment at the Children’s Hospital. It hosts a 24-hour Big Event annually to raise awareness for pediatric cancer, and in 2017, the organization raised a record-breaking $2.57 million.
RELATED: Dance Marathon a success, despite not achieving goal
The faculty member in the new chair will be dedicated to advancing research into treatments and cures and improving outcomes for pediatric cancer patients, said UI student Alex Linden, the executive director of Dance Marathon. He told The Daily Iowan that a national search is underway to recruit for the position.

“By establishing this chair position, [Dance Marathon] promotes innovative research and care that will improve the outcomes for the strongest kids we know,” he said.

Research done in the lab by the person in this position will translate into treatments intended to be more effective than procedures such as radiation and chemotherapy, Linden said.

“I believe this is the next step in creating a world-class pediatric oncology program here at the University of Iowa Stead Family Children’s Hospital,” he said.

Brooks Jackson, the UI vice president for Medical Affairs and dean of the Carver College of Medicine, said the ultimate goal of the person serving in the position is to create personalized, targeted treatments to care for children across Iowa, the nation, and the world.

“I cannot overstate the impact private support has made in helping us not only build this hospital but also maintain our excellence in research, education, training, care, and service,” he said.
RELATED: After the dance, allocation begins
Past gifts from Dance Marathon have contributed to pediatric cancer research and treatment at the UI. Lynette Marshall, the president and CEO of the UI Center for Advancement, said that in 2011, Dance Marathon was the first organization to give to the new Children’s Hospital, making a $5 million commitment to the facility to create a pediatric cancer center. Dance Marathon also pledged $2.2 million in 2015 to create the Dance Marathon Pediatric Oncology Targeted Therapy Program.

After the excitement surrounding the work going on at the Children’s Hospital in the past year, from the opening of the new facility in February 2017 to the national attention the UI gained with the Hawkeye Wave during the football season, Marshall told the DI that this gift will help build on the momentum and, hopefully, prompt additional gifts.

She said the collective generosity of students involved with Dance Marathon has had an undeniable effect on children and their families.

“The proof is not only written on the walls of this hospital but also on the faces of our families,” Marshall said.