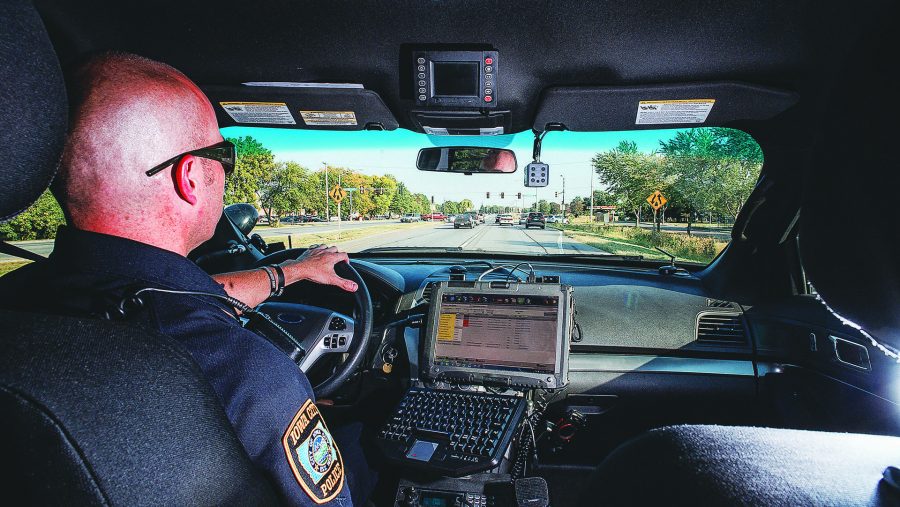 Sgt. Derek Frank of the Iowa City police patrols on Highway 6 on Wednesday. Frank has been on the force for 19 years. (James Year/The Daily Iowan)

The Iowa City Police Department is one of six law-enforcement agencies across the county to receive a $450,000 grant as part of a national initiative to strengthen response and investigation in cases of domestic violence, sexual assault, and stalking.

According to a press release from the city of Iowa City, the initiative is called Integrity, Action, and Justice: Strengthening Law Enforcement Response to Domestic and Sexual Violence. The program, the release said, will be conducted by the International Association of Chiefs of Police with help from the Office of Victims of Crime, the National Crime Victim Law Institute, and subject experts.

Officials started the initiative in order to set guidelines for law-enforcement agencies in addressing and responding to gender bias in cases of sexual and domestic violence, the release said.

“This is a great opportunity for the [Iowa City police] to become a leader and model department in responding to domestic violence and providing victim support,” Police Chief Jody Matherly said in the press release. “We look forward to using the resources and experts provided through this unique experience to their full extent.”

Through the grant, the release said, the police will receive continual training and technical assistance in domestic- and sexual-violence cases. The police will assess needs, build partnerships, grow community trust, raise awareness of gender bias, engage in strategic planning, and implement victim-focused plans. With this, the release said, local departments will be able to share tools and models for other law-enforcement agencies across the country.

In the last year, the release said, city officers handled more than 700 cases of relationship-oriented crime, including domestic violence and harassment.

“These resources will allow our department to create a better response to domestic crimes, including those committed against the LGBTQ+ community,” police Investigator Scott Stevens said in the release. “Eliminating gender bias will ensure all officers are able to recognize micro-aggressions that come from implicit bias and to understand how to address and rework those issues.”